For reasons too tedious to explain but involving leave entitlement, ceaseless winter storms, and rolling rescheduling, Mr Pict and I found ourselves spending a weekend driving to and from Washington DC.  My in-laws had flown in from England and met us there in order to then take our four children on a Spring break vacation.  Mr Pict and I, therefore, found ourselves unexpectedly child-free in Washington DC.

We spent the evening catching up with friends over dinner and wine.  Before I earned that grown up treat, however, I had to trail my husband around some Civil War sites he had never visited.  As I have previously explained, my husband spent his early teens living in the suburbs of DC.  How he managed to live there for years plus have us return from the UK to visit his parents several times without ever visiting these sites is beyond me.  However, as a Civil War nerd, it is on his bucket list to visit just about every obscure Civil War site in the nation so I was happy to indulge him and his bucket list collecting.

First up was Fort Stevens.  I don’t know why I made any sort of assumptions but I had expected the site to be a little more grand or at least cared for than it clearly was.  Instead, what I found were some mounds of earth on a patch of scrappy grass in the middle of a residential neighbourhood, a couple of canons surrounded by litter and broken glass, and the noise of a construction site that abutted the remains of the fort.  Fort Stevens’ significance rests in the fact that it was the site of the only Civil War battle to take place within the limits of the nation’s capital and it was the only time when a serving President came under enemy fire.  The history is that, in July 1864, Jubal Early’s Confederate troops decided to march on the capital following a battle in nearby Frederick.  They encountered Fort Stevens – one of a series of forts protecting the city – and there was a brief battle that repelled the Confederate soldiers.  Lincoln and his wife visited the fort and witnessed the battle, hence his coming under fire.  A rock with a bronze plaque marks the spot where Lincoln stood on the earthworks. 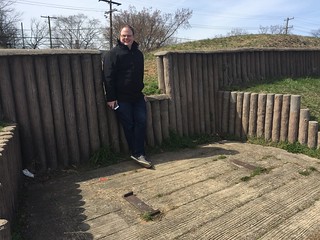 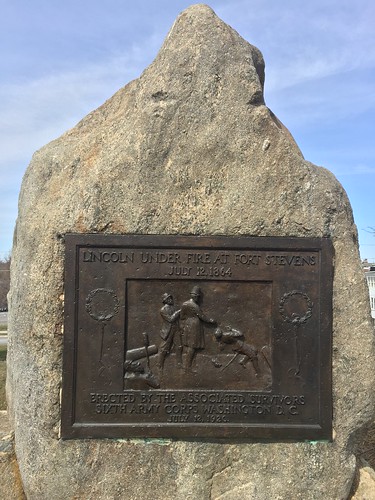 I was underwhelmed by Fort Stevens but the next stop on the itinerary was a little more my cup of tea in that it was a cemetery.  Battleground Cemetery contains the graves of the 40 soldiers who died in the defence of Fort Stevens and others who fought there – the last to be interred being buried there as recently as 1936.  Again there was a Lincoln connection since Abe attended the burial cemetery and dedicated the land, which makes it one of America’s smallest national cemeteries.  It was indeed a modest cemetery.  There were a few regimental memorials within its walls but the graves themselves were very small and simple and arranged in a circle.  It was well-maintained and a tiny pocket of peace and quiet despite being within a major city.

The following day we decided to stop off in Annapolis as we wended our way back to the Philly suburbs.  Being a bitterly cold Sunday in March, there was not an awful lot for us to do but wander around and absorb the charm of Annapolis’ historic district.  To give our pit stop a little more focus, we decided to visit the Maryland State House.  Occupied since the 1770s, it is the oldest state capitol in continuous use and once served as the nation’s capitol. 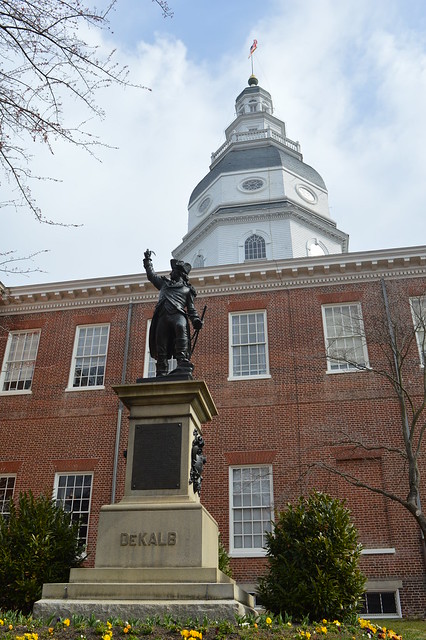 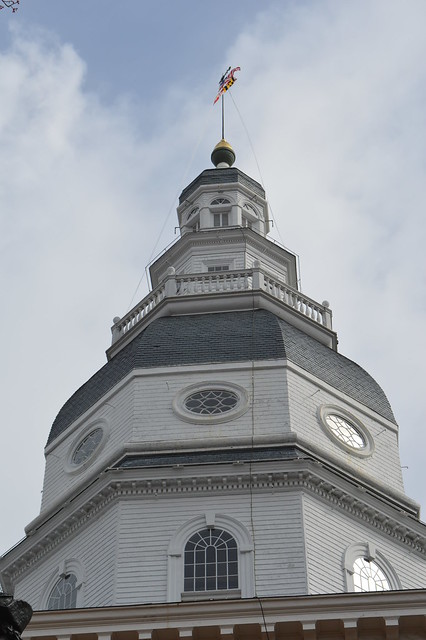 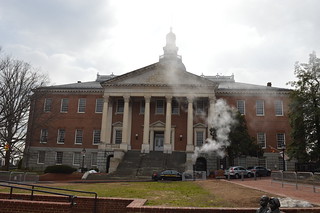 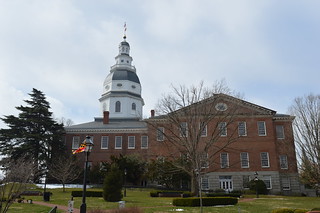 I started out my visit there by stopping by the statue of Thurgood Marshall.  It depicts Marshall as a young lawyer at the start of his career and behind him are pillars reading “Equal Justice Under Law”.  The sculpture also contains three other related statues: one of Donald Gaines Murray, whose case was one of Marshall’s early victories in the fight to desegregate schools, and two children who symbolise Brown V the Board of Education.  It used to be the case that a statue of Roger Taney stood on the grounds but his statue was removed last year.  I personally was glad to see Marshall celebrated at the State House and to see Taney’s absence. 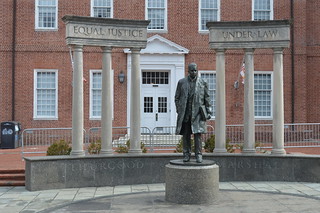 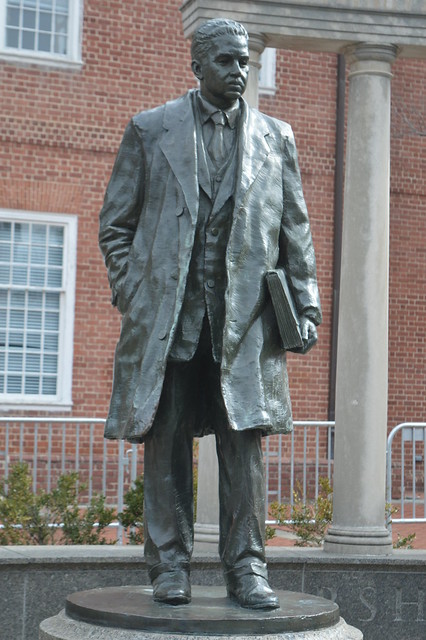 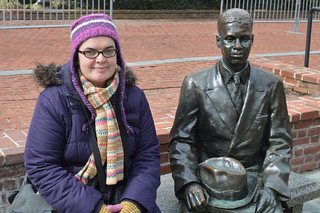 Once inside, we explored the various rooms on a self-guided tour. We had the whole place virtually to ourselves so it was very relaxing and informal.  We had a peek into the current Senate and House chambers.  Mr Pict enjoyed seeing the voting buttons on each desk whereas I was enamoured of the Tiffany skylights.  The Caucus room was very dark but was filled with gleaming silverware.  This was a service from the USS Maryland which is designed with lots of references and symbols relating to the state.  I like things that are shiny but the silverware was all a bit fussy for my taste.  I wouldn’t want to keep it polished either.  Just as well I will never own a silver service set then!  Probably the most historically significant room in the State House is the Old Senate Chamber.  It was in this space, in December 1783, that George Washington resigned his commission as Commander of the Continental Army thus establishing an important precedent for America’s democracy. 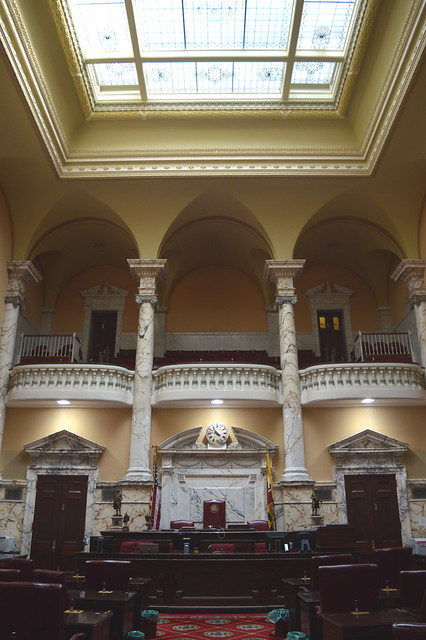 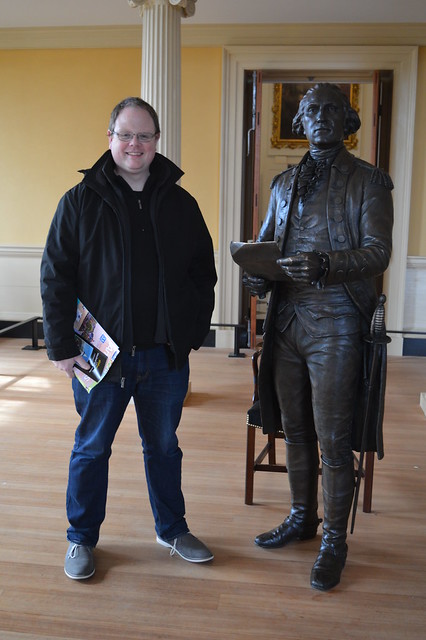 Back out on the cold streets, we wandered around and poked our noses into the odd shop.  We spent a lot of time rummaging in a very cluttered, very musty, but entirely wonderful book shop.  We then wandered down to the Dock area.  There I found the statue commemorating Alex Haley, author of Roots, and Kunta Kinte, the fictionalised African ancestor of Haley’s that is the starting point of his saga.  We sat there and people- and duck-watched for a bit before walking back through the old streets and back to the car. 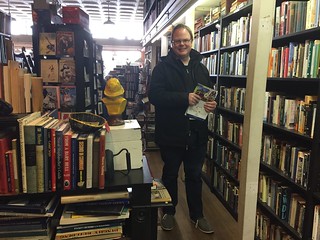 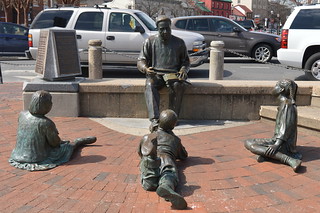 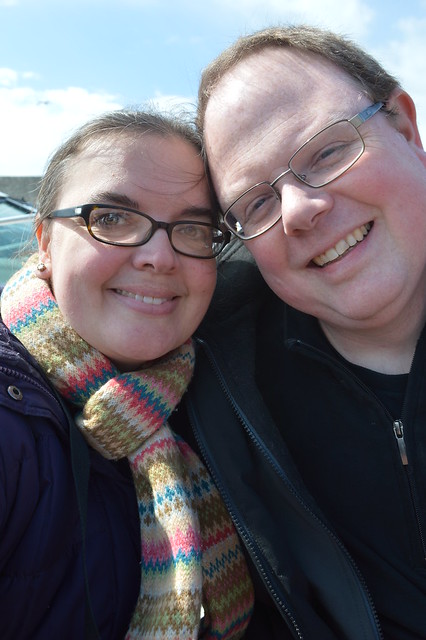 This was my first visit to Annapolis since I first visited in 1995 and I had forgotten how quaint and attractive it is.  At some point we will have to return with the kids, in warmer temperatures, and when there is more to do.