We decided to use the time over Thanksgiving break for a spontaneous family trip.  We found a cheap as chips hotel room in Ocean City, Maryland – because really not many people are clamoring to hang out at the coast in late November – which determined our trajectory.  We, therefore, spent the Friday following Thanksgiving moseying down the Delaware Coast.

Our first stop of the trip was at the Air Mobility Command Museum in Dover, Delaware.  Located next to Dover Air Force Base, it proved to be a vast showroom (split between a hangar and an airfield) of military aircraft.  Now, I am not someone who is into military history or militaria and nor am I interested in vehicles so this blog post is not going to be replete with technical information.  I honestly don’t think I can recall what the majority of the aircraft were even called even though I asked Mr Pict to refresh my memory yesterday.  This will, therefore, be a more impressionistic account of the time we spent there.  I will state, however, that despite my lack of knowledge or enthusiasm for the subject, I thought the Museum itself was really excellent.  The variety of military aircraft was impressive, of course, but there was also ample information accompanying each exhibit, there was space to move around each plane, helicopter and glider, and they were not so reverential that they prevented visitors accessing all the planes.  This latter point was somewhat critical for the success of our visit since my kids tend to baulk at visiting plane and train museums that take a “look but don’t touch” attitude.  And I have not mentioned that access to the Museum is entirely free.  We gave a donation but there was no pressure to do so. 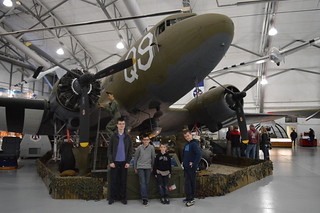 We started in the hangar and I was able to hook the boys’ interest right away.  There was a glider on display, one side of which had been removed to reveal that it contained some sort of military road vehicle as its cargo.  The kids found this sort of aircraft autopsy interesting.  We also learned that these gliders became rather sought after following the Second World War not because of the gliders themselves but because of the crates they were shipped in.  People would build houses from the disassembled crates. 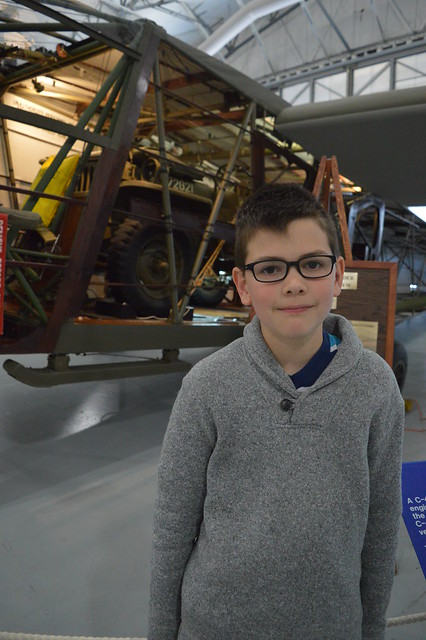 War II plane.  They knew about ball turret gunners and their perilous placement on war planes but seeing one up close actually drove home the vulnerability of the poor gunner.  They were even able to peer inside and see how terribly cramped the space was.  A separate replica demonstrated, through use of a dummy, how the gunner would have been positioned inside the ball turret, tucked up like a fetus in a mechanical womb.  It made me vividly recollect Randall Jarrell’s poem ‘The Death of the Ball Turret Gunner’ and I felt very squeamish just thinking about the intense claustrophobia let alone the imminent danger. 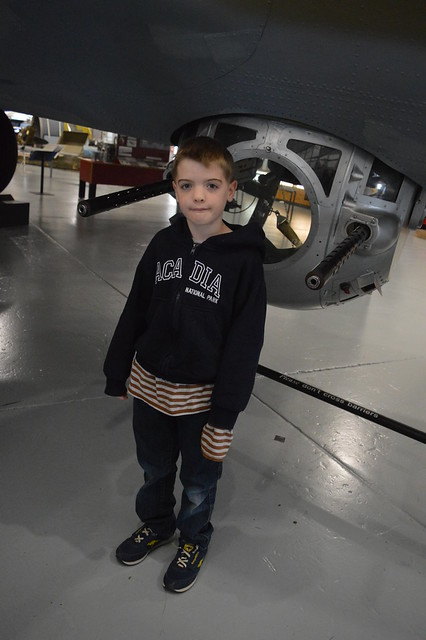 We saw simulators and training aircraft, mid-air refuelling vehicles, fighter jets, and helicopters – including a Huey which even I could identify – and a machine for making dog tags, which was somehow both fascinating and poignant.  The boys especially enjoyed the airfield exhibits, however, because they had space to roam and even run.  Best of all, however, was the fact that several of the aircraft were open to visitors meaning they could actually clamber aboard and experience the interior of the planes.  Having seen the troop seating with all the webbing on the interior walls in movies and documentaries, it was interesting to be able to experience something of its discomfort for ourselves.  It was also interesting to see how cargo would be stacked up inside planes and to learn about the incredible capacity of some planes, including one that could fit several fully assembled Hueys.  A tour guide demonstrated how strips in the floor could be flipped so that regular passenger seating could be clipped into place.  The boys also got to clamber around inside a Hercules (see: I know the name of that one) and sit in the cockpit. 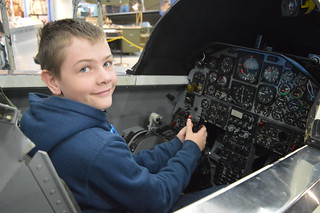 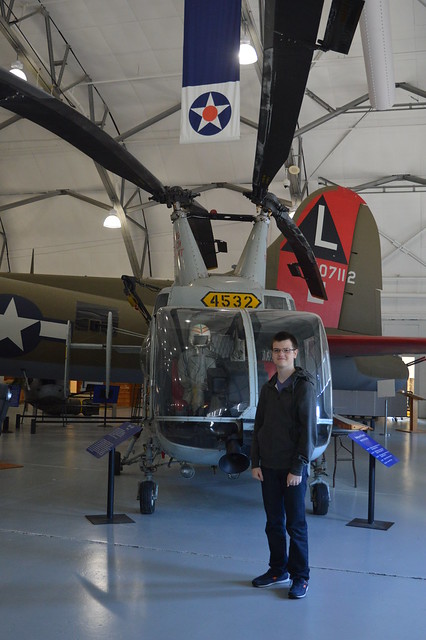 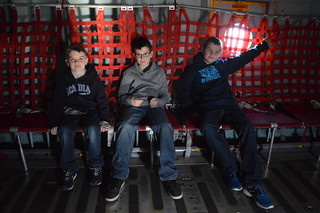 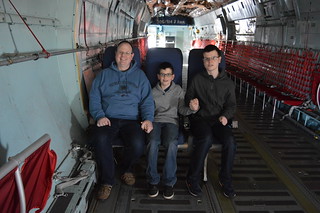 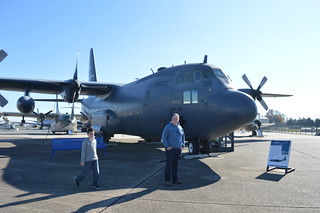 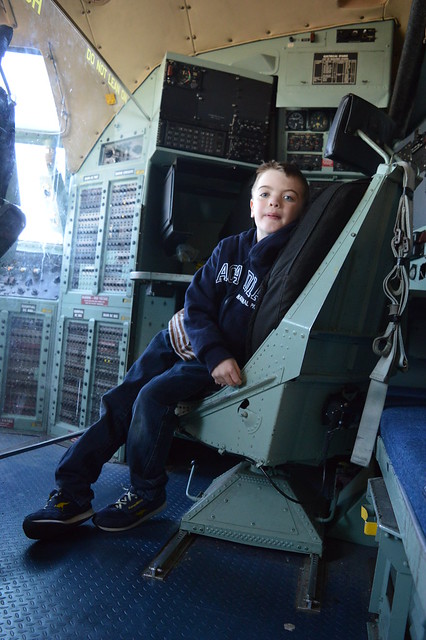 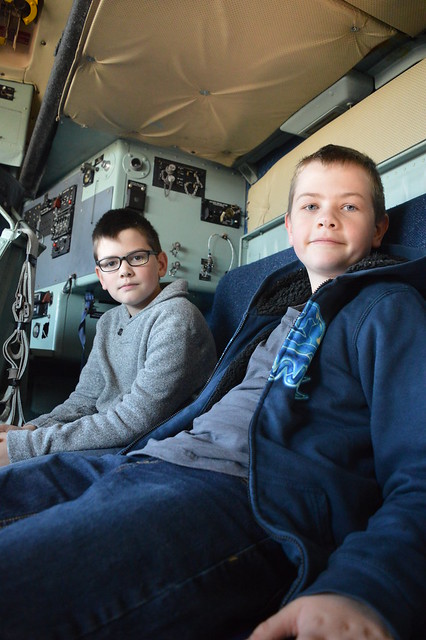 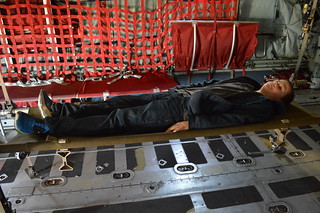 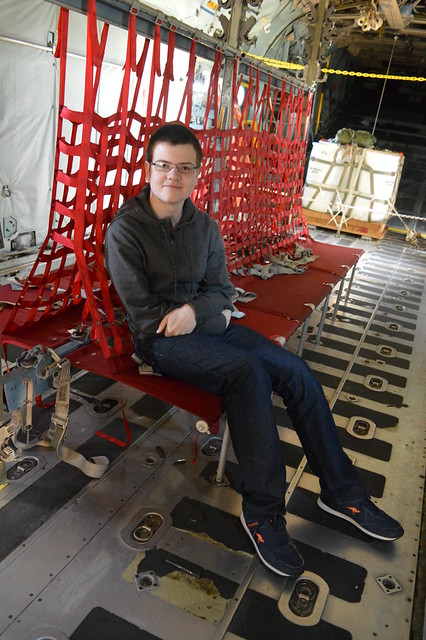 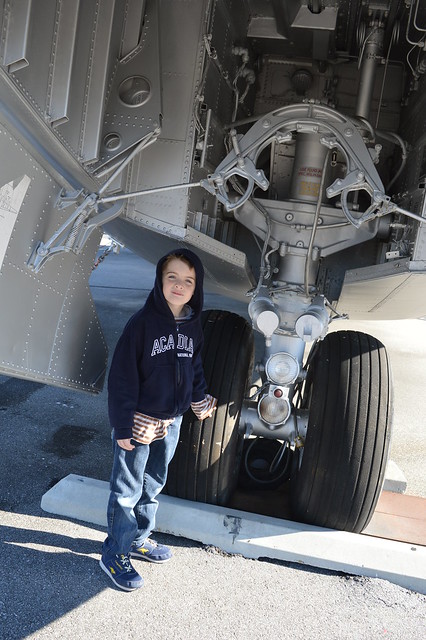 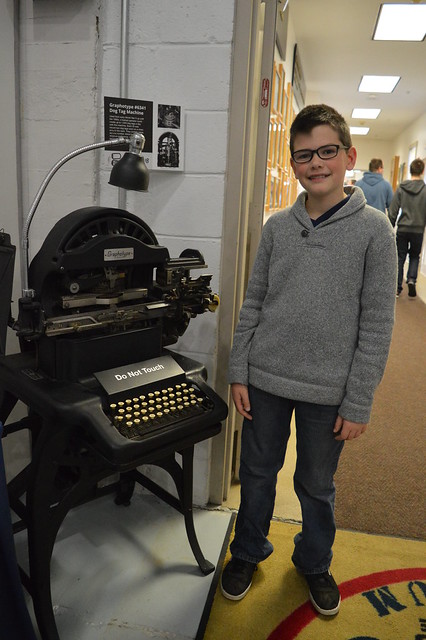 Military museums always have to go a long way to win me over because, as stated above, I really have pretty much no interest in the subject of military history.  As I possess only very general knowledge of military transport, I admit to having had low expectations of this one.  But win me over it did.  It was accessible, provided information that worked as an “idiot’s guide” for the uninformed (me), spacious enough that we never remotely felt harassed or harried by the presence of others, offered variety, and allowed the kids to actually engage with what they were looking at.  It was a really good museum and was a great start to our trip. 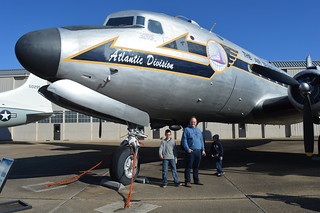