Apologies for being so quiet in recent weeks, not only on my own blog but more so on the blogs of those I follow.  Free time has been in extremely short supply and it has not been possible to find time to read blog posts or do any art or really do anything in my spare time other than flop on the sofa in front of the TV or collapse into bed and read until the book wallops my in my snoozing face.  Summer should be a more chill time for me since I am off work and the kids aren’t in school.  However, our summer did not get off to the best start.

As followers of my blog may know from a previous mention, our basement flooded.  We had a week of almost perpetual torrential rain during which our sump pump failed.  Consequently, the basement of our house flooded, something we discovered only when one of the boys decided to go down there for a video game he wanted to play.  This was not just some dampness either.  Nope.  We had probably five or six inches of water.  Thankfully I was not at work and the kids were off school because immediately it was “all hands on deck” to try and rescue what we could.  Our house has no attic storage so the basement is used for storing almost everything you can imagine and as a place for the kids to keep all of their toys, board games, craft supplies, and video games, a sort of playroom/hang out. 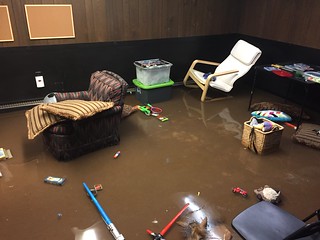 Having rescued what we could, the next step was to try and remove as much water as possible.  Kind neighbours loaned us their shop vac and large fans.  I set to with the pumping and kept a measure of my progress by drawing a level with a marker on the now kaput dehumidifier – the irony – to keep myself motivated.  It took many, many cold and wet hours but by 2am the following morning, all of the water (at least of the properly liquid variety) was gone.  The next stage was to get absolutely everything else out of the basement.  The rooms of our house had fast become filled with the possessions we had saved or were attempting to save – my husband had his memorabilia drying out all over the living room and kitchen floors – so the patio and front porch became the dumping ground for all the possessions that could not be salvaged, including the furniture. 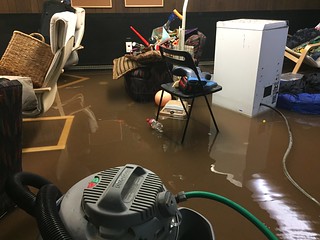 As an aside, what in the world would possess a doorstepping, cold-calling sales person to approach a house with a porch covered in flood damaged furniture and try to sell the occupants windows?  I ask because it happened to me during this whole ordeal.  As he gave me his opening pitch, I looked dumbfounded at the guy –  my large forehead covered in sweat beads, my clothes filthy, objects being lugged in my arms and disgorged onto the porch – my jaw fell open, my brow furrowed so much I could see my own eyebrows, and I gestured to all of the ruined possessions that surrounded us.  I actually have no idea what I said to him but I know I mentally high-fived myself for not deploying curse words.  Whatever it was I said, the chap literally walked backwards and then scurried away.  Seriously, dude: know your audience.

Anyway, the week proceeded with ripping off walls and ripping up carpet and thoroughly drying the space out.  We also had to have a new sump pump installed (obviously) and also a new water heater because the flood had led the one we had – which was less than two years old – being condemned.  Super.  We also tried to salvage as many possessions as we could, though the success rate was not superb.  The thing is, when you emigrate, you part with most of your worldly goods.  The only non-essential things that crossed the Atlantic with us were things that were irreplaceable, things that had sentimental value or meaning to us.  Therefore, when I mention that we tried to save what we could, that is because it wasn’t just a bunch of stuff we probably should have donated or recycled years ago, it was the stuff we had considered important enough to pack into a shipping crate and pay to transport across an ocean. 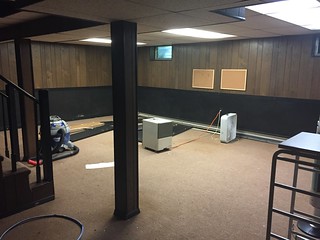 So it has been a pretty dispiriting time and there is, of course, all the chaos and hassle, not to mention the stress over financing the restoration.  However, we have been trying to maintain perspective because truly we are in the privileged position that we only lost stuff and only in one level of our house.  People endure far worse during fires and natural disasters.  We have also endured the deaths of loved ones so we have appropriate perspective on losing things that are merely material.  I appreciate we are lucky to have what we do and that really I have such little cause to whine in the grand scheme of things.  Additionally, we are lucky that the basement has not been decorated since the 1970s so it is not as if we are having to rip out lovely new carpet and beautifully painted walls.  It was due for a refresh at some stage but it would have been so much nicer to save up to do it on our own timeline.  So we definitely have perspective and know things could be so much worse.  However, I would be lying if I claimed I was not stressed out of my mind by the current state of things. 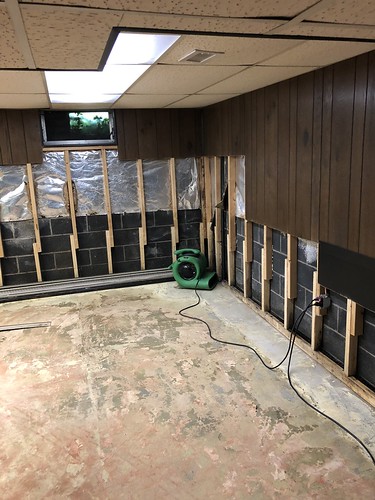 And did I mention that my dishwasher decided to shuffle off its electrical coil in the aftermath of the flood?  I mean, having to hand wash everything is the least of my problems right now but I seriously could have done without that timing.

And – on top of all of this – we were scheduled to go on vacation at the end of the week of flood recovery.  We were committed to going  – as it was too late to cancel and get refunded – and we knew we would benefit from escaping from the house mess but still the timing was stressful to handle.

So the explanation for my online absence is two-fold: flood recovery and travelling.  I will blog about the latter as time permits.  Hopefully normal blog interaction service will resume soon.