We just celebrated a milestone birthday in the Pict household as Mr Pict turned 40.  Life might begin at 40 but Mr Pict’s birthday was all about looking backwards at fond favourites and long held obsessions that started in his youth.  And the aphorism that you are only as old as you feel was underscored by the fact that every single one of his gifts was a tad juvenile.  You definitely cannot be approaching middle-age, after all, when you have just received a Darth Vader mug, Big Hero 6 on bluray, a Predator Pop vinyl figure and – the piece de resistance – the Lego Death Star.  Such joyful supping from the fountain of youth had him bowled over. 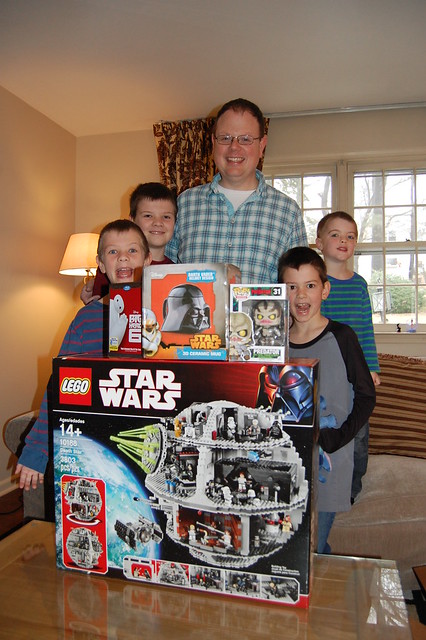 We had also all made something for our husband / father.  Our middle two sons had created a toybox in their Disney Infinity video game.  Mr Pict is fanatical about ancient Rome so they had built a Roman temple and they had also digitally constructed the words “Happy Birthday” and set up a fireworks display.  Continuing on that theme, our oldest and youngest sons had created a little world on Minecraft that was inspired by ancient Rome.  There was an elaborate temple, streets and houses, a colosseum full of fighting gladiators and hatches releasing funny creatures into the arena and lots of sculptures.  As a computer and video gaming fan, Mr Pict was thoroughly impressed as well as being touched.  My effort was a small watercolour of Yoda. 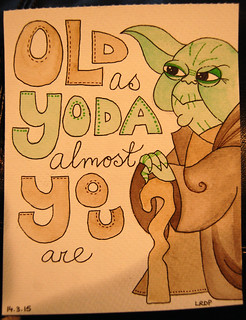 In keeping with the wholly juvenile theme of the day, we had a family outing to the cinema to see ‘Paddington’.  Not only did we see a kid’s film but Paddington was a TV series that Mr Pict and I watched as kids so it had the vintage, retro, ’70s connection that was apt for the day too.

I have to tell you that we thoroughly enjoyed the movie.  I confess that I went in with low expectations – having never particularly been a fan of the TV show or the Michael Bond books on which it was based – so it far exceeded my expectations.  It was sweet without slipping into mawkishness, there were jokes pitched at adults as well as plenty of great slapstick and silliness for the kiddliwinks, the performances were on point and the whole thing was charming and warm.  The curriculum vitae of the staff were littered with British institutions such as the Harry Potter series, Downton Abbey and Horrible Histories.  Indeed, the whole thing was very British.

‘Paddington’ was set in a version of London that does not exist anywhere other than in a film studio, all twee and quaint and a little bit hip.  There was the stiff-upper-lipped, buttoned-up father obsessed with rules, risk management and maintaining order  – who of course had to learn to let loose and have fun – who is the mainstay of so many British movies and telly programmes.  Probably no coincidence that he was portrayed by the same actor who plays the above-stairs patriarch in ‘Downton Abbey’ either.  He was married to a woman who represented another British stereotype, that of the lovable eccentric.  She was all bubbling emotion and energy with pleasingly clashing clothes in bright colours and with a creative job to boot.  Paddington had to learn how to navigate British rules of behaviour and etiquette in addition to things like plumbing because Britons are all about etiquette, of course.  There’s a nosy, interfering neighbour.  There’s also the fondness for nostalgia, partly no doubt due to the source material being vintage but also because there’s a love of harking back to bygone eras in British cinema, so there was an allusion to wartime evacuees and child immigrants fleeing Hitler’s Germany in addition to the film somehow stylistically transcending eras so as to straddle the divide between contemporary Britain and the 1950s source material.  There’s the Queen’s guard, obsessions with weather, tea, cab drivers, the hazards of the London Underground.  And an immigrant, albeit a spectacled bear from Peru.

Anyway, it was all very well done.  Engaging performances, well constructed set pieces, actual laugh out loud moments, verbal wit and visual comedy and some lovely moments of flair with the cinematography.  So it was a great addition to the birthday schedule.

To spare me from cooking a complex meal, we decided to go out for dinner.  This turned out to be a bad choice as it turned what was proving to be a fabulous birthday celebration into a curate’s egg.  Our service started out indifferent and tardy and got worse from there.  We waited an hour and forty minutes for our entrees to arrive at our table.  By that time, the energy from our appetisers had worn off.  The kids were getting cranky and very tired despite our having arrived early for dinner.  And when my kids get cranky, my own tolerance and patience boils down into annoyance.  No apology or explanation was offered for the delay.  We could discern that there was no problem in the kitchen as one of the tables adjacent to us went through three covers in the time it took for our meals to arrive.  Ridiculous.  We asked to see the Manager who could also offer no explanation but who, by way of apology, waived the entire bill.  That gesture was appreciated but we would prefer to have not had a wrecked evening out.

Since we got home so late from dinner, we decided to postpone the celebration cake until the next evening.  It was a rich, chocolate confection of moist sponge and smooth, thick frosting that proved to be a massive hit with all concerned. 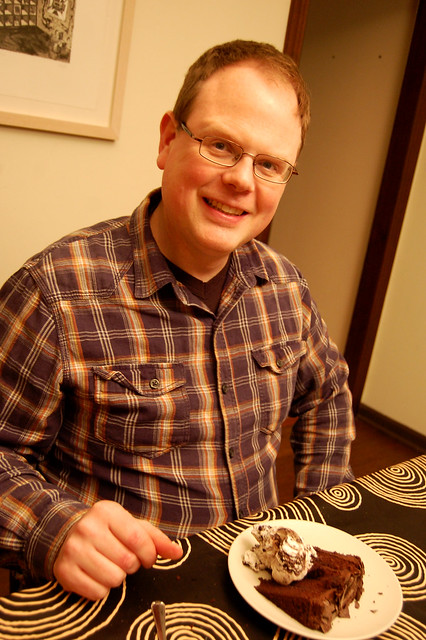 And that concluded the geekiest birthday of our lives so far.