Our 12 year old has an obsession with sharks.  This is partly because he fears them and partly because he thinks they are fantastic creatures.  This obsession has led him to becoming a bit of a mini-expert on the (in)famous 1916 shark attacks.  I appreciate that some readers might think this is a bit of a tasteless topic to allow a tween boy to become obsessed with but a) we are nerds rearing other nerds and b) we encourage our sons’ curiosity and support their interests.  After all, our kids are being raised by parents who are – among other things – interested in the American Civil War, zombies, pandemics, the history of sideshows, and true crime.  It’s how we roll.  Anyway, at the (shark) tail end of Shark Week, we decided to facilitate our little shark nerd by taking a trip to the Jersey Shore to visit sites relevant to the attacks that occurred in 1916. 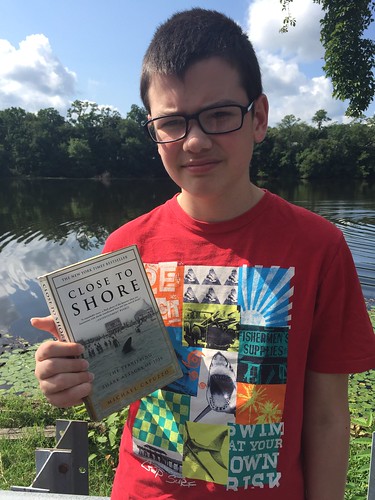 While it would have been neater to visit the sites in chronological order, other factors dictated that we actually undertake the trip in reverse order.  We, therefore, started our trip in the town of Matawan.  The final attack actually occurred at Cliffwood when 12 year old Joseph Dunn was attacked as he was clambering out of the water.  Thankfully he survived.  Matawan was the site, therefore, not of the final attack but of the final fatal attack.  One of the reasons the 1916 shark attacks are so notorious is because of the bizarre fact that the final attacks occurred in an inland creek and not in saltwater.  It was 12 July and some boys had just gotten off work from the factory where they were employed and headed to the creek to swim.  Obviously there was no way these poor kids could possibly anticipate that a shark would be present in the water and unfortunately one little boy, Lester Stillwell, was killed.  The other boys alerted the folks of Matawan and tailor Stanley Fisher leapt to action.  He dived into the creek to recover little Lester and was himself attacked.  Heroic Stanley was quickly lifted from the water, placed onto a train to get him to hospital, but he succumbed to his injuries.  My research had made it apparent that there was no way for us to access the swimming hole without committing an act of trespass and probably doing battle with poisonous plants.  Our 12 year old, therefore, made do with visiting a part of Matawan Creek that had safe public access. 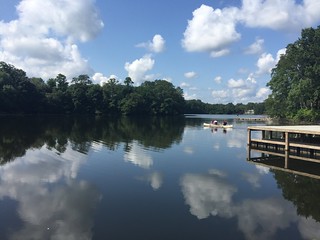 We then visited Rose Hill Cemetery, a lovely, peaceful, shady spot where both Lester Stillwell and Stanley Fisher are buried.  Little Lester’s grave is sited near a pond that was absolutely covered in blooming lily pads.  It was a pretty and serene spot.  Previous visitors had left little toys and trinkets for Lester so evidently we were not the only people who had undertaken this trip.  On a little grassy promontory, we located the grave of Stanley Fisher.  It seemed apt that his grave overlooked that of Lester just as, in life, he had been looking out for the boy.  We also stopped by to see a memorial that was placed in a park to commemorate the centenary of the tragedy. 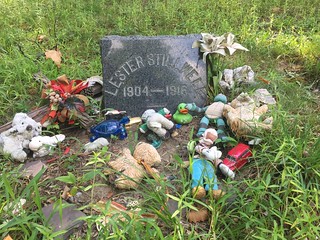 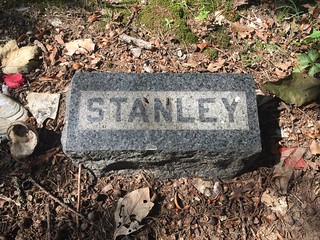 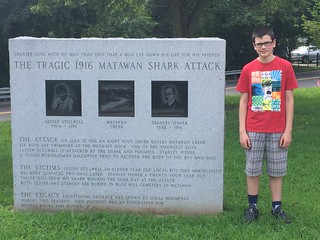 After Matawan, we went slightly off-theme.  It would be entirely off-theme except that the location is on Raritan Bay and it was in that body of water that the alleged man-eater shark was caught.  I write alleged because we cannot know for sure that they captured the correct shark or indeed that only one shark was responsible for all of the attacks that happened over the course of those 12 days in July 1916.  Anyway, since we were in the vicinity, we thought we would go and check out the National Park at Sandy Hook to see if it was worth making that the focus of a day trip at some point in the future.  The answer is “Yes” so I won’t go into too much detail in this blog post since we plan to return and visit properly at some point.  I love lighthouses so it has one of those for me and it has Fort Hancock so has some military history for Mr Pict.  For the kids, it has wide open space for them to be feral and access to beaches. 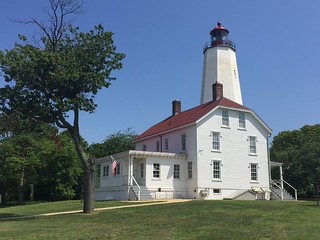 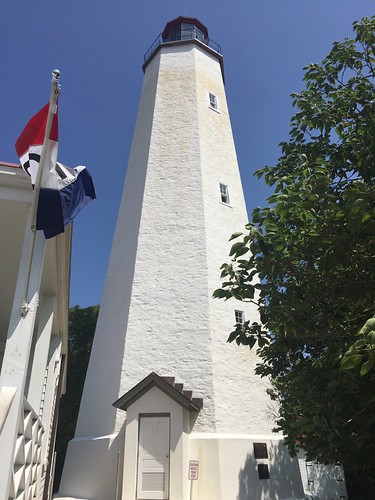 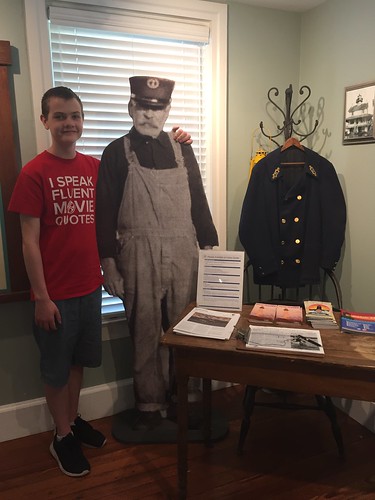 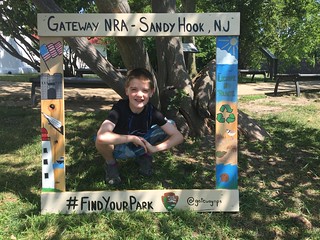 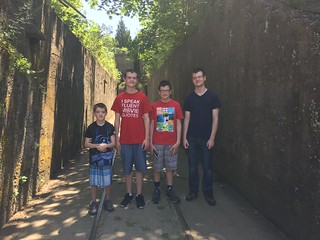 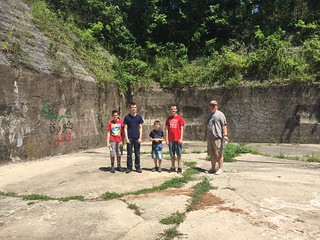 Back on topic, our next location was in Spring Lake.  This was where, on 6 July 1916, Charles Bruder was attacked.  The poor man was so severely injured that he died on the lifeboat as it made its way back to shore.  Bruder had been employed as a bellhop at the Essex & Sussex Hotel.  The building is still standing, though it is now a condominium block, so our 12 year old was able to see where Bruder lived and worked as well as the section of shoreline where the tragedy occurred. 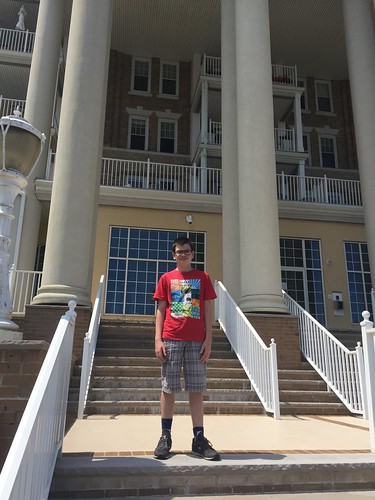 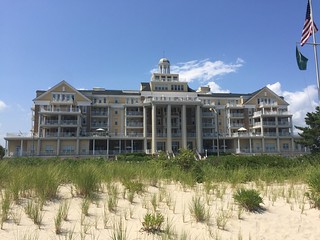 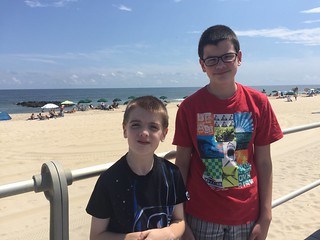 Our final location for the day was Beach Haven, on Long Beach Island.  We had been to Long Beach Island previously – and even found a dead shark on the beach – but that was before our son had researched the 1916 attacks and knew of its relevance.  Beach Haven was the site of the first attack, on 1 July, when a young man from Philadelphia named Charles Vansant was attacked.  His rescuers pulled him from the water and carried him into the hotel where he was a guest but tragically he died.  The Engleside Hotel was demolished in the 1940s but we could visit the place where it once stood as it became a Veterans Memorial Park.  We then headed down to the beach.  It being the conclusion of our trip and getting near the end of the day, we opted to spend some time relaxing and having fun there.  Amazingly  – given the theme of the day – the 12 year old with the mild phobia of water went swimming in the sea and had a wonderful time. 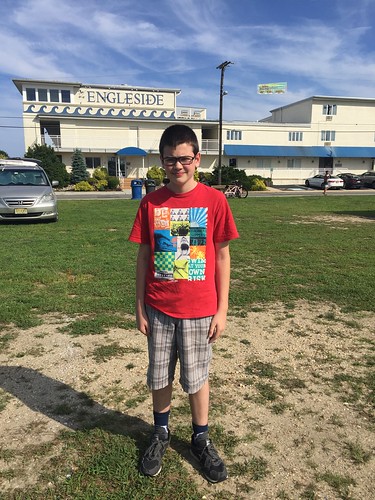 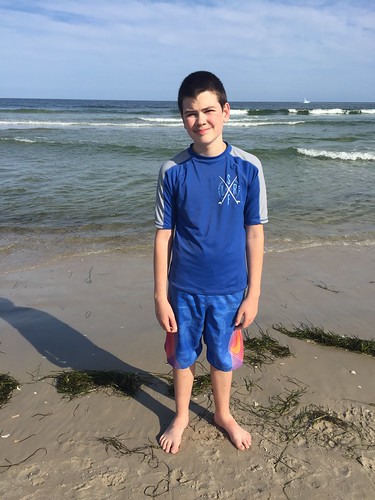 Next time we go to the Shore, we will commit to doing what more regular folks do.