My June Art Snacks box presented me with a challenging colour palette.  Along with the neutral mechanical pencil and the fine tip black gel pen, I had two water based pens in bright yellow and a grey-mauve, and a juicy fine tip brush pen in hot pink.  I could see how I could just about turn the grey-mauve into a neutral and make it work with either the yellow or the pink but making all three work in some coherent way definitely presented me with a challenge.  I also found that grey-mauve watercolour pen tricky to work with.  Even though the yellow was the exact same brand, its pigment behaved much differently.  That grey-mauve, however, didn’t blend well and I was left with a hard line wherever I had drawn with it.  I found the saturation of its pigment very variable too.  I do like that colour, however, so I will persevere and continue to experiment with it.  There must be a way to get it to cooperate and behave in the same way the yellow did.  I very much like the hot pink brush pen, however.  It was super juicy and activated really well when I added water and a little goes a long way.  I probably should have had the pink dominate the illustration since it was easier to work with.  I had not intended to give the female figure a turban.  I had originally sketched in that shape to be hair but I decided I needed a bit more yellow in the illustration to make the colours balance out a bit more so a turban it became.  There is something about the combination of colours and the style of the figure that makes me think of the 1980s and the New Romantic pop bands of my youth. 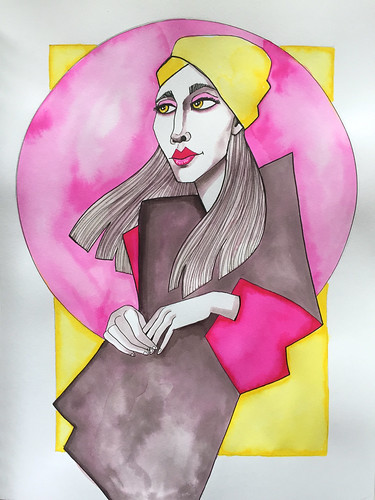 2 thoughts on “Hot Pink and Sunshine”