Mr Pict and I seem to have a bit of a tit-for-tat or quid pro quo thing going on when it comes to touring historic places: I get to visit a cemetery and he gets to tour a Civil War battlefield.  Having dragged everyone around Arlington National Cemetery the previous day – and two of the kids really were dragging their feet around there – the following day was dedicated to sites of Civil War battles.  While my blog post about the Cemetery was very probably too detailed, I will tell you in advance that my post about the battlefields is likely to be a bit threadbare and impressionistic because it really is not my area of expertise.

We started out our day at Fredericksburg, which I believe featured in a few cycles of warfare.  We watched an informative video presentation in the National Park office but apparently it all went in one ear and out the other because this is what I think I know about the action there*: by the Autumn of 1862, Lincoln needed a Union victory in order to bolster support for his administration so the pressure was on for Burnside and Hooker to take Richmond; the plan involved Burnside relocating his troops across the Rappahannock River at Fredericksburg; various bits of the plan went pear-shaped and the result was a Confederate victory.  In addition to the video, the building housed a small but effective museum.  I thought it was well-balanced in terms of its focus on the two sides of the conflict and in terms of its narrating of the experiences of combatants and the civilians.  I especially liked a wall of framed portraits on hinges that revealed information about the individuals portrayed when opened.  My youngest son, meanwhile, enjoyed the challenge of building a pontoon bridge. 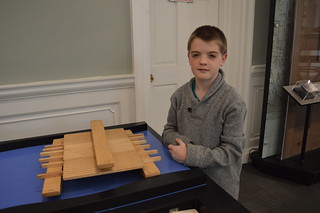 What the boys really enjoyed, however, was discovering a lizard inside a wee cranny and my youngest found an injured moth which he decided to adopt for the duration of our walk around the site.  He named the moth Stick and chose a suitable tree away from the car park to relocate it to. 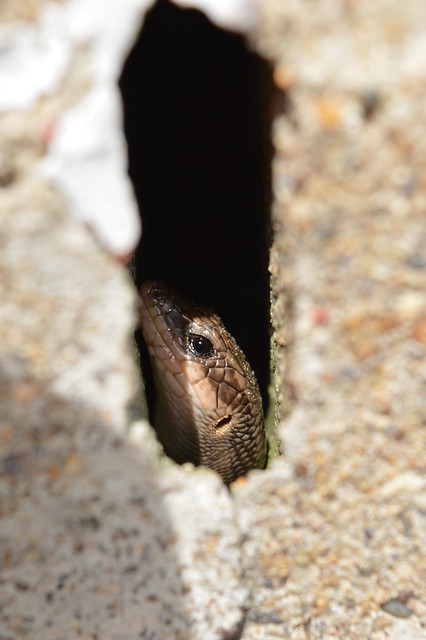 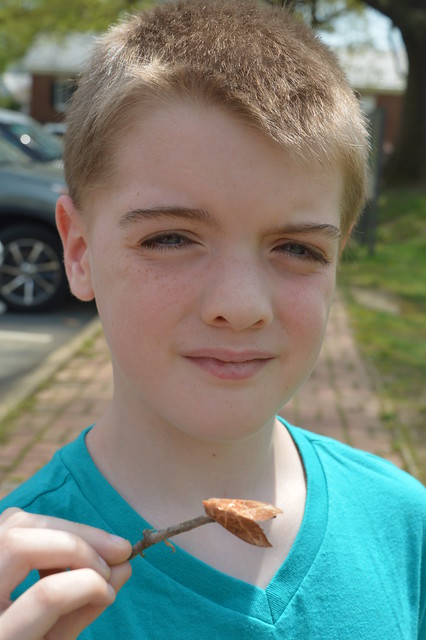 The area of battlefield preserved by the National Park Service is focused on a bloody scuffle called the Battle of Marye’s Heights.  This is an elevated area, a stone wall, and a sunken road.  I have the impression that every Civil War battle either involves a sunken road, a peach orchard, or a wheat field.  There were houses in this area so the civilian population had been forced to flee and leave their property to get hammered by weaponry.  While all that remains of most buildings is an outline of where they once stood, one building remained intact and in situ.  Peeking through the windows, we could see the pock-marks of bullets all over one wood panelled wall. 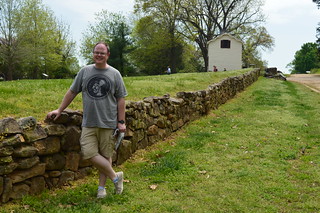 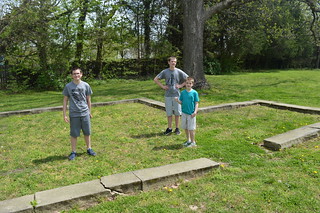 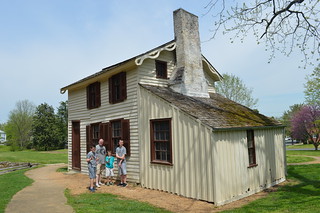 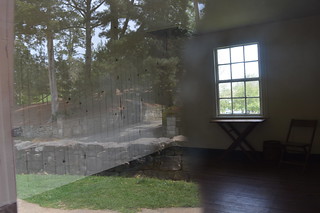 The park area contained a statue to a young soldier named Richard Rowland Kirkland.  He was a Confederate sergeant positioned at the stone wall.  He grew perturbed by the groans and anguish of the suffering Union soldiers and his compassion moved him to minister to the wounded.  There was not a ceasefire while he did so so he was very much risking his own life and limb to bring water to these injured men who were his enemy.  Poor Richard was to be killed at Chickamauga at age 20.  His is a touching story and one that is probably embellished but I prefer to remember the humanity people can be capable of when immersed in the history of hatred, division and bloodshed. 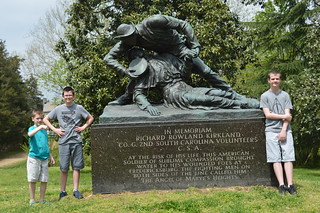 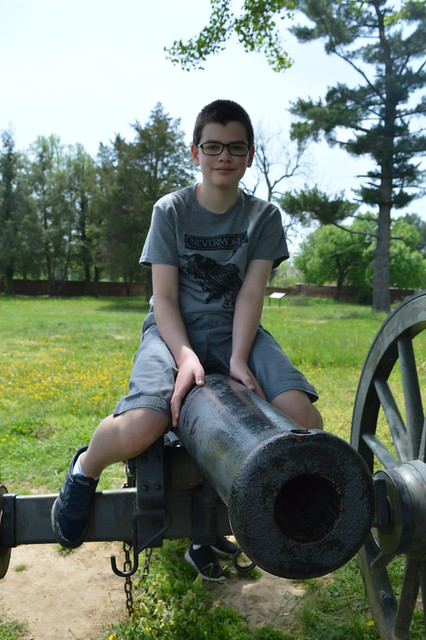 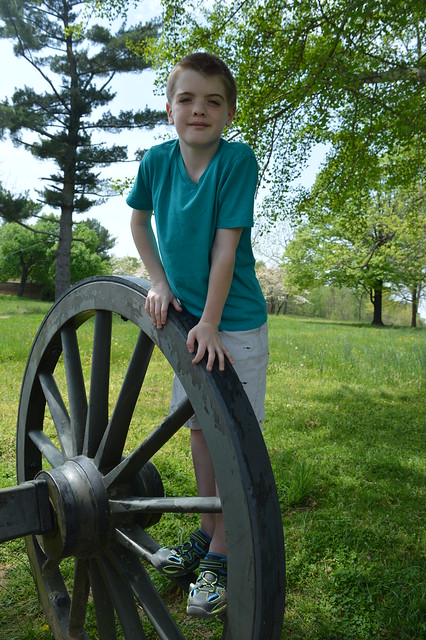 After a picnic lunch, we stopped off at Chancellorsville.  The visitor centre included a very good museum full of artefacts and information boards, lots packed into a small space.  For various reasons, I didn’t spend much time consuming the material but I did spend quite a bit of time in one room.  The centerpiece was a display case containing Confederate and Union uniforms and equipment but what really caught my attention was the surrounding walls.  They were covered in the names and, in some cases, photographic portraits of those who were killed in the battle – which, if memory serves, was the bloodiest except for Antietam.  Seeing all of those names was really quite arresting.  For my brain, numbers are a bit too abstract but to see those numbers as a visual was really evocative.  I was also struck by the mingling of names from both sides of the conflict. As someone with only a passing interest in the subject, I too often think of the Civil War in terms of the conflicting ideologies, the attitudes and decisions of the leadership of both sides, the dichotomy of “goodies and baddies”.  However, as soon as I am forced to remember the experiences of individuals, what I reflect on is that Confederate mothers keened and mourned for their sons as much as Union mothers did.

I had thought that Chancellorsville referred to a town of some description but learned at the visitor centre that it in fact refers to just a single dwelling house.  At the time of the battle, it was occupied by a woman surnamed Chancellor and her daughters.  They found themselves under siege in a burning house during the battle before being rescued and relocated out of harm’s way.  Again, we watched the video which was very informative and once again I almost instantly forgot much of the detail.  What I remember from the reenactment was a sense of complete chaos and scenes of fire raging through the woodland.  It was also the battle that inspired the novel ‘The Red Badge of Courage’.  It was also at Chancellorsville that Stonewall Jackson was shot by friendly fire, which led to the amputation of his left arm, and ultimately to his death from pneumonia a week later. 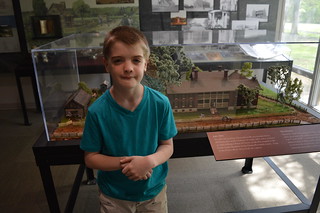 On the subject of Stonewall Jackson, he was the subject of our next quest.  As a fan of “Roadside America”, oddities, and the more obscure tourist attractions, this was the aspect of our day of battlefield touring that most interested me.  A short car journey deposited us at the end of the driveway that led to Ellwood Manor, a house dating from the late 18th Century that was requisitioned as a field hospital during the Civil War.  We were not there, however, to visit a historic building.  Nope.  Instead, we strolled right past the house and down a pretty little path that led to the family cemetery.  Buried in that cemetery was the subject of our quest: Stonewall Jackson’s left arm.  Jackson’s chaplain was the brother of the occupant of Ellwood Manor and, therefore, chose that spot as the final resting place of the General’s amputated limb.  It even has its own headstone, which is more than can be said of any of the entire people buried there.  We found ourselves at the grave of the majority of Stonewall Jackson in the summer of 2016 so it feels like some sort of achievement to have now visited his arm too.  I love all that peculiar and macabre stuff. 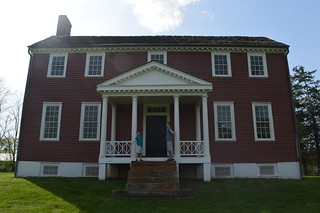 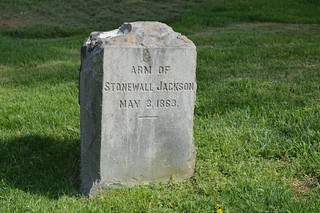 We concluded our battlefield tour with what, to my untrained eye, was just a field.  Mr Pict tried to explain its significance to me – something about the site of Jackson’s final flank attack – but by that point anything he was saying about military strategy and battle action just sounded like the brassy “wah wah” sounds the teachers make in ‘Peanuts’.  I guess some things my brain just was not designed to absorb.  Mr Pict was happy, however, and that was the important thing. 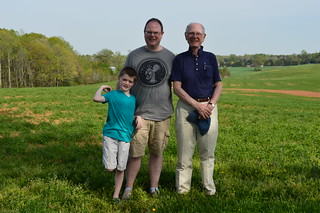 Then it was back to home base for a barbecue and s’mores for the boys, which is what they had been promised/bribed with, so they ended the day on a happy note too. 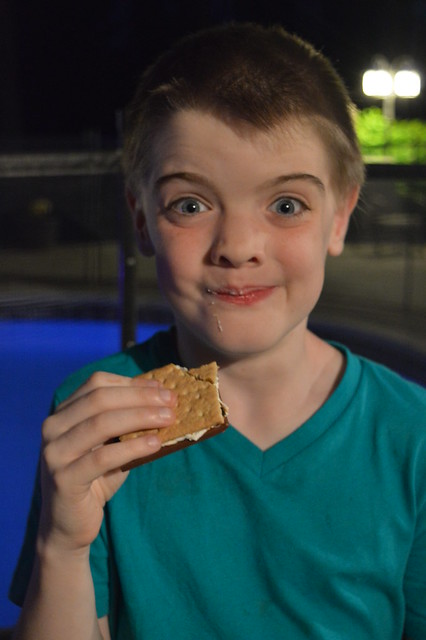 *Feel absolutely free to correct me in the comments.