Our third son turned 12 on Monday so the preceding weekend was filled with celebrations for him.  Our oldest son turns 16 on Saturday so our week is bookended with birthday festivities.  We have a tradition that the person with the birthday gets to choose the activity for the closest weekend.  My middle two sons are obsessed with the TV show ‘The Office’ so the decision was that we would go to Scranton and tour sites associated with that show and its cast of characters.  I have only seen the odd episode of the show so I had to do a lot of research and pick the brains of my 13 year old.  I may know next to nothing about ‘The Office’ but I am always happy to support, encourage, and facilitate someone else’s nerdy interests. 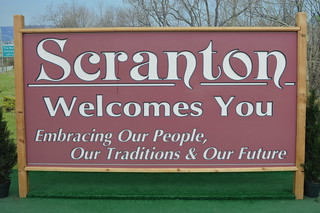 We parked up at the Steamtown Mall.  We had been watching that mall gradually deteriorate into something out of a dystopia during our previous visits to Scranton.  I was anticipating it being even more moribund and empty so was pleasantly surprised to see that real inroads have been made to turning around its fortunes.  What they seem to be doing is letting spaces to small, independent retailers – possibly for a peppercorn rent – which meant there were far fewer empty store spaces and much greater footfall.  An aquarium has also moved in which is presumably a way of pulling people into the mall.  My boys – including Mr Pict – liked a store dedicated to vintage video games.  It was the type of niche business that would never be able to afford a retail spot normally but it had a large space within the Steamtown Mall.  I was most impressed by the makeover of what had been the food court area.  It had been very sad and stale when we last visited – ghastly enough that I would never have thought to eat there – but it had been totally redesigned to provide compact spaces for eateries and artisans.  But I digress….

We started off outside Boscov’s, a department store founded in Pennsylvania.  Apparently this was where the characters Pam and Phyllis bought the same outfit.  Right next to Boscov’s was an Auntie Anne’s pretzel store.  Aside from the fact that a character named Kelly is fond of this brand of pretzel, it is nigh impossible for my kids to travel anywhere within Pennsylvania without snacking on a pretzel so we had to buy pretzel for elevenses.  Birthday boy had a pizza pretzel, the 13 year old had a jalapeno pretzel, and our youngest son had a pretzel dog which is, yes, a hot dog sausage wrapped in pretzel dough.  Our final Office item in the Mall was the “Welcome to Scranton” sign that features in the shows opening credits.  It used to be outside on the roadside but has been moved inside to become a tourist attraction.  My wee nerds were delighted to be able to pose beside it. 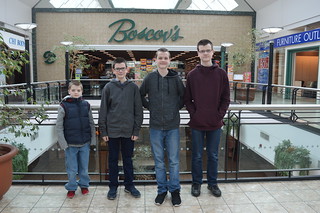 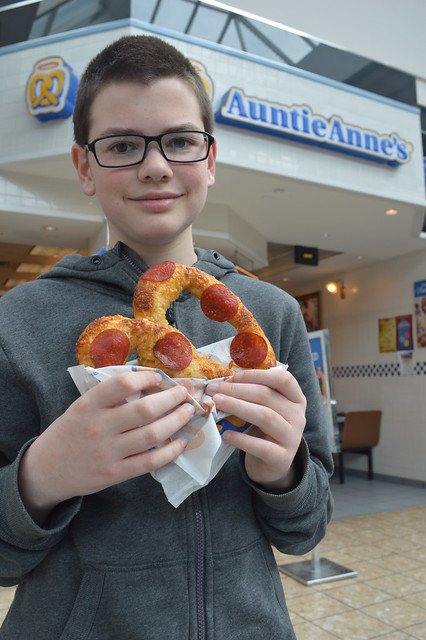 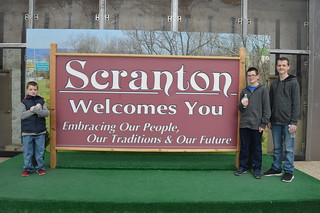 We exited the Mall and headed towards Courthouse Square.  From there, we could see the electrified sign atop the Trade building.  I have yet to see this lit up, which I imagine would be very impressive, but I love the design even without the illumination.  Scranton is named the Electric City because it was the home of the first electrified trolley (tram) system which operated from 1886.  However, the reason my boys were keen to see the historic sign was because the sign and the lyric “electric city” feature in a rap performed by the characters Michael and Dwight on ‘The Office’ – the same rap that gave me the title for this blog post.  There is also an Electric City mural on a wall alongside a busy road so, of course, we had to go and see that too.  While that mural functions as a welcome to Scranton, I actually preferred a colourful mural tucked away in an alley just off of Courthouse Square.  I had to go and see that on my own, however, since it was “off theme” and superfluous to our tour. 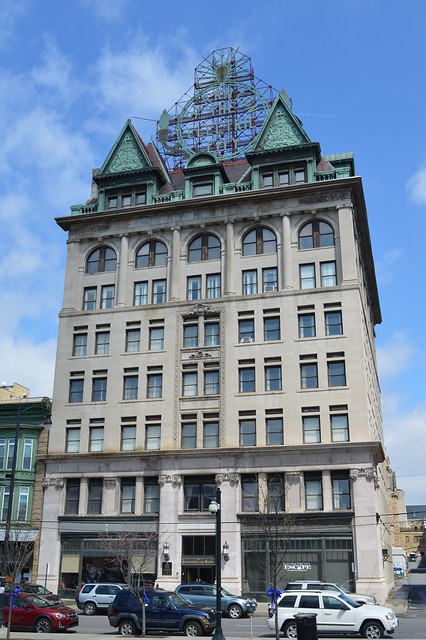 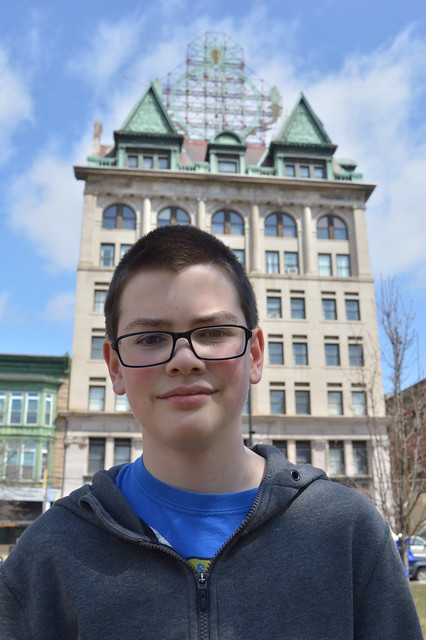 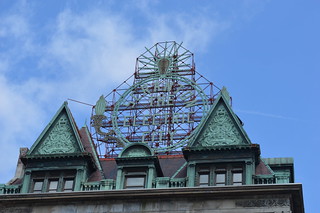 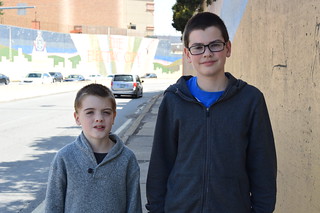 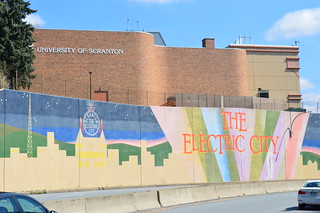 After the Electric City sign, we walked along to the Pennsylvania Paper and Supply company.  En route, we had a detour into a comic book store because apparently it is OK to go “off theme” if you are a child but not if you are an adult.  For those not in the know, ‘The Office’ is about the employees of Dunder Mifflin, a fictional paper company.  The building in which the real paper company is housed features in the opening credits and they have embraced the connection to the show by placing “Dunder Mifflin” on one side of the building’s tower.  As we stood on the street taking photos, a car drove past playing the theme music for us.  We laughed and waved.  It seems some Scrantonians are very welcoming towards nerdy TV tourists. 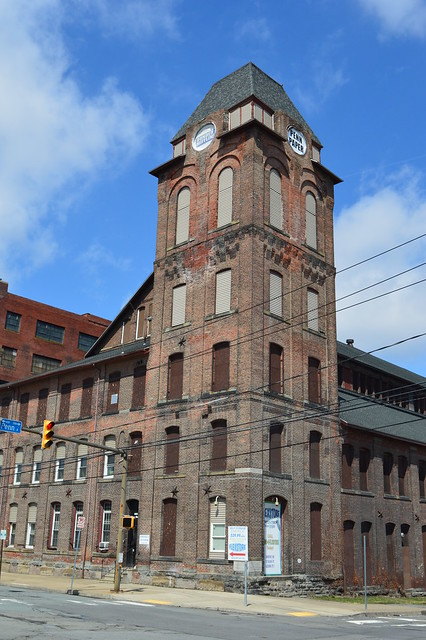 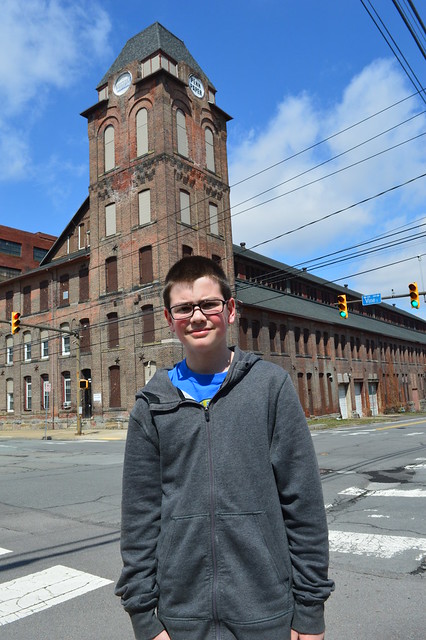 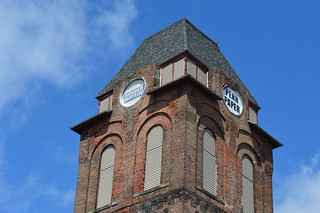 Next up was Cooper’s Seafood.  According to my 13 year old, this was the location where Michael and Holly argued about Meredith’s ethics.  I have no idea but I was quite keen on the idea of dining there.   Unfortunately, our arrival there did not coincide with anyone feeling hungry (thanks, pretzels!) so instead we just had to take in the building with our eyes and not with our stomachs.  There is a striped faux lighthouse surrounded by pirates and a gigantic octopus on the roof.  It looked like a lot of fun.  It was definitely the place for purchasing ‘Office’ merchandise.  My 12 year old could have gone bankrupt in there.  They even had things like staff badges for each character and paper with the Dunder Mifflin letterhead.  In the end, he chose to buy a poster for the movie-within-a-show ‘Threat Level Midnight’ and was chuffed to bits with his purchase. 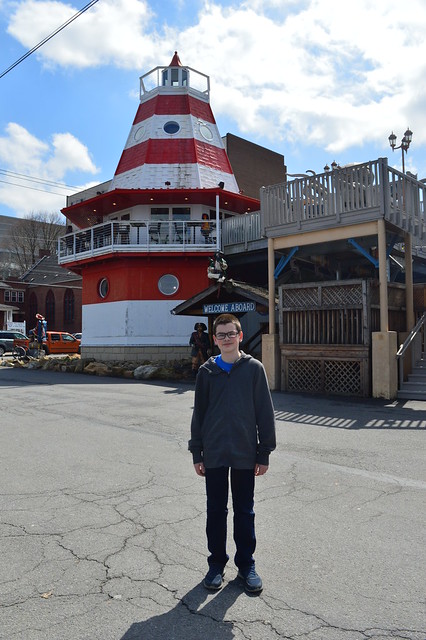 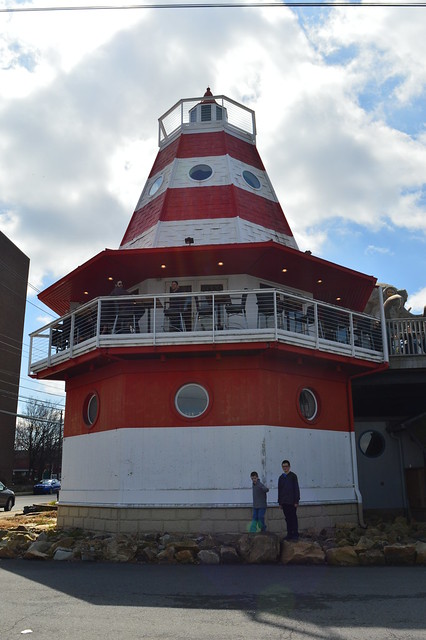 We then drove to an industrial estate on the fringes of Scranton.  First stop there was a bowling alley in which there is sited a bar called Poor Richard’s Pub.  It’s a favourite hang out spot for the characters.  I couldn’t take the kids into the bar so we just dipped into the building to claim it and snap some photos of the outside.  Nearby is a pizza restaurant called ‘Alfredo’s Pizza Cafe’.  Apparently there is a joke in the show that involves confusion between this pizza place and one called ‘Pizza by Alfredo’s’ that serves “hot circles of garbage”.  The smells wafting out of the restaurant were deeply appealing and had me drooling but we took a vote and again the kids declared that they were not hungry enough.  Gah!  So frustrating.  I love pizza.  We will need to try it out next time we find ourselves in Scranton.  I spotted a Rite Aid at the corner so we quickly nipped there for another photo op because, again, it is tied into the show since characters purchase a cologne from there called “Night Swept”.  Rite Aid is also part of Scranton’s economic history since it was founded there in the early 1960s. 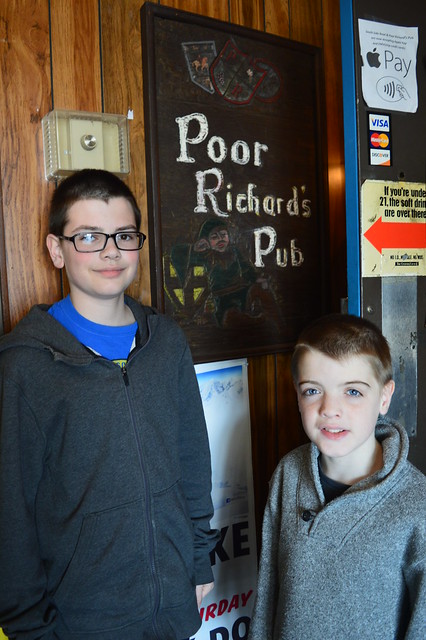 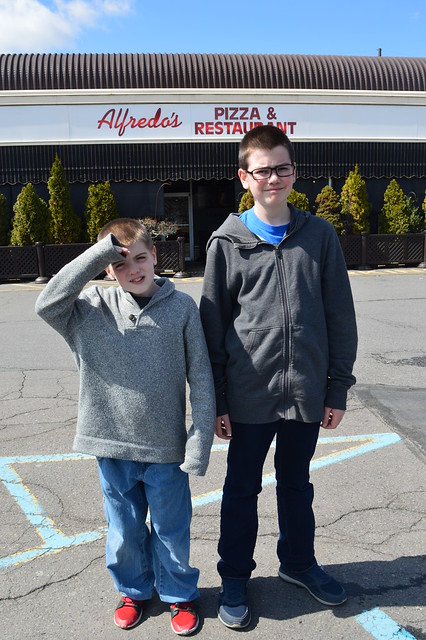 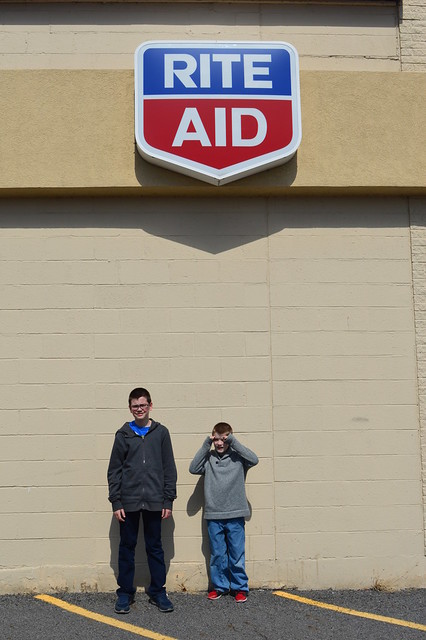 Having done all the major ‘Office’ themed stops within Scranton’s limits, the boys then decided we should go see Lake Wallenpaupack.  This lake features in an episode called “Booze Cruise”.  While it uses the name of the real lake, it was actually filmed in California but the kids were up for the idea of a lake visit regardless.  Unfortunately, at least from the direction we approached Lake Wallenpaupack, we could not find a public access route down towards the water or even a place to park up and walk down.  The lake is vast – Pennsylvania’s third largest indeed – so we decided to give up on the plan instead of wasting time circuiting the lake.  We turned around and gradually started working our way along very windy rural back roads towards major roads that would take us home.  That route took us past an abandoned motel so, of course, I had to quickly brake, pull the car over, and leap out to take photos.  I was way “off theme” again so everybody else refused to get out of the car.

By this time, it was very late in the afternoon, we still had a long drive home, and everyone was famished with hunger.  Having not eaten at either Cooper’s or Alfredo’s, we had one last attempt at eating “on theme” by opting for a Chilli’s, a chain restaurant that is the favourite of Michael’s, the main protagonist of ‘The Office’.  The boys even ordered the Awesome Blossom – Michael Scott’s favourite dish – though they were disappointed it was only petals and not a full onion blossom.  The service was excellent and the food so plentiful that we took home several boxes.  The birthday boy was well-fed, happy, and delighted with his ‘Office’ day out. 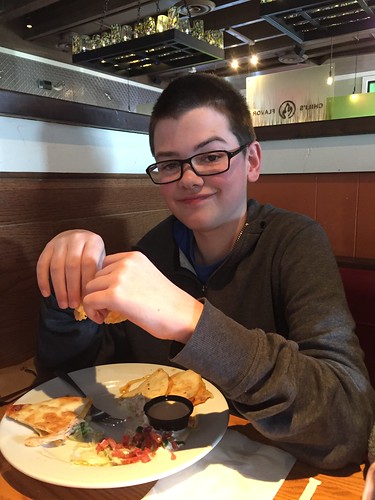 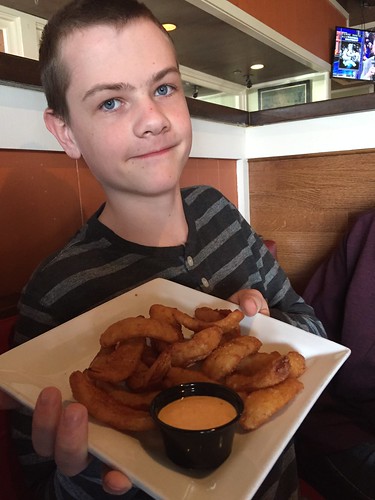