Would you like to know how to completely undermine the benefits of a relaxing Caribbean cruise and transform quality family time into snarling conflict?  Then do read on.

By mid-morning we had disembarked in Miami and bid farewell to my in-laws (who were travelling on to Mexico to visit family).  We had a whole two days of driving ahead of us with an overnight stay in Savannah.  With a bit of time to play with on the first day of travel, we had the option of either exploring Savannah (which I have not visited since 1998) or stopping off somewhere in Florida.  As you will no doubt guess, I was rooting for Savannah.  However, acknowledging it was going to be dark and everyone tired by the time we got there, I let Mr Pict have his choice: the Kennedy Space Center.

Mr Pict loves outer space stuff – he was an avid amatueur astronomer for a while – but it doesn’t do much for me.  Physics and engineering generally don’t do much for me.  However, I drag him around art galleries and cemeteries so it’s all about give and take.  Convincing the kids that we should support Dad in having his day was a whole other thing though.  Maybe it was a week of over-indulgence and burning the candle at both ends or of too much freedom.  Maybe they were all just crabbit and at peak t(w)een griping.  Whatever the cause of their resistance, they just were not having it.  With the exception of the youngest, they made it clear they were begrudging every single minute of the time spent there.  We have made this mistake before, pushing for just one more activity or experience on a vacation and then regretting it.  We should have known better. 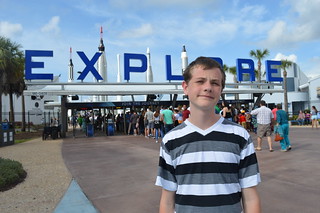 Having a sense of which way the wind was blowing, I advised Mr Pict to prioritise what things he really wanted to see.  We, therefore, decided to start with the tour of actual NASA buildings and lined up for the bus.  When I was last at the Space Center, almost exactly 20 years earlier, it essentially comprised just this tour, an IMAX theatre and some rockets.  Now the Visitor Complex is so vast that the tour seems almost tacked on as a sideshow.  The queue for the bus was constantly moving but it took ages for us to get to the head of the line.  The bus tour took us past the massive Vehicle Assembly Building, the scale of which can only really be appreciated by seeing it in real life, but what I was most excited about was seeing a large alligator in the road’s meridian.  We were deposited within a building that contained a launch command centre complete with a reenactment of the Apollo 8 launch.  There was then a large exhibition hall containing various vehicles, including a lunar rover, a Saturn V rocket, some kind of landing module, and spacesuits. 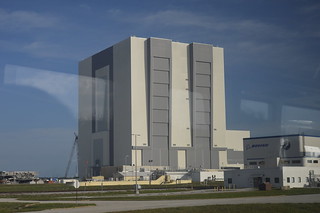 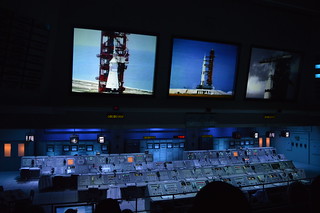 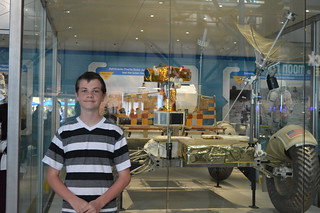 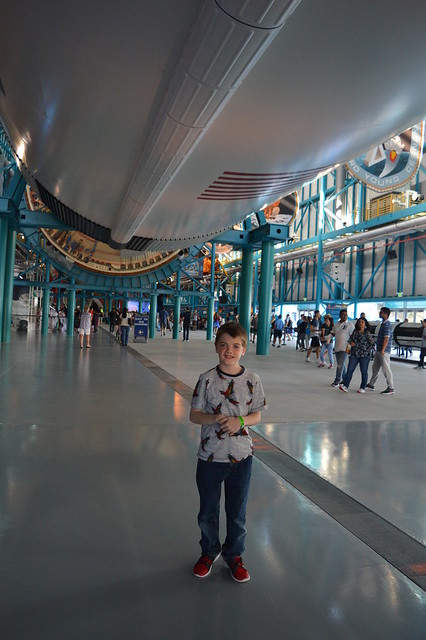 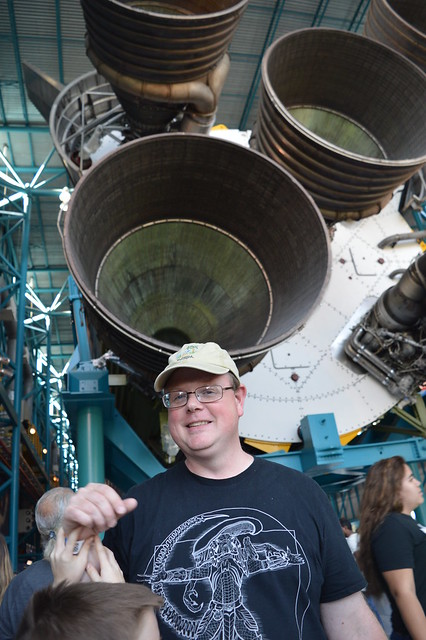 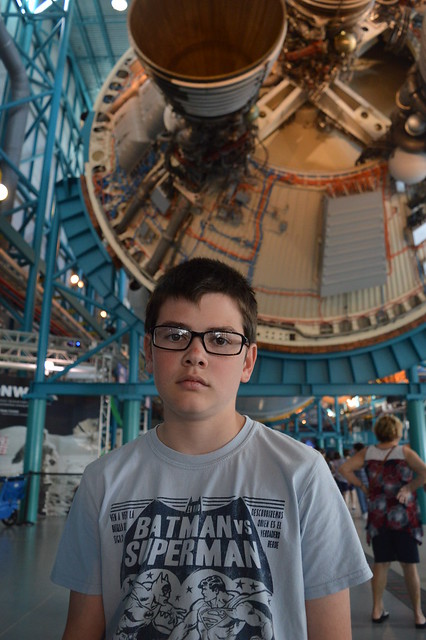 Upon returning the visitor complex, Mr Pict decided that we should next go into the Space Shuttle Atlantis exhibit.  Our oldest son utilised the fact he was still feeling unwell to opt out so we found him a shady waiting area while they rest of us went in.  The line was extremely long and very tedious.  We were standing in line for 45 minutes just to enter a room where we had to stand and watch an audio-visual presentation before being herded into another room in which we had to stand and walk.  This room at least contained an actual Atlantis Shuttle.  We then discovered that the line for the Atlantis experience was going to be another 40 minutes with the experience itself lasting half an hour.  Honestly, I was done standing and queuing but I also did not want to leave my oldest son alone any longer – plus I get queasy in simulators – so I declared I was just going to head for the exit.  That was the cue for the other three boys to declare they were over it too.  Even Mr Pict had to admit that the thought of joining yet another queue just for this one ruddy experience was a despairing one.  He quit too. 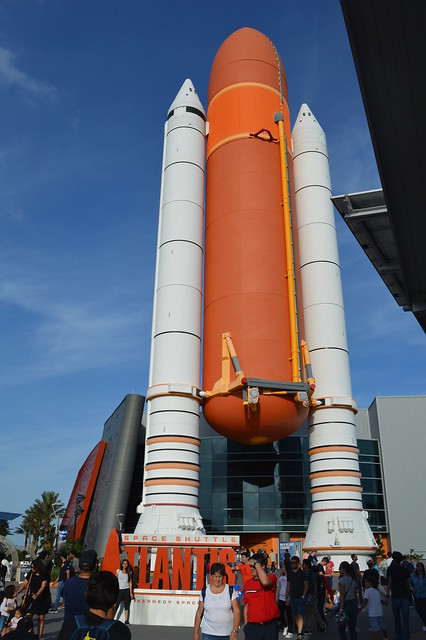 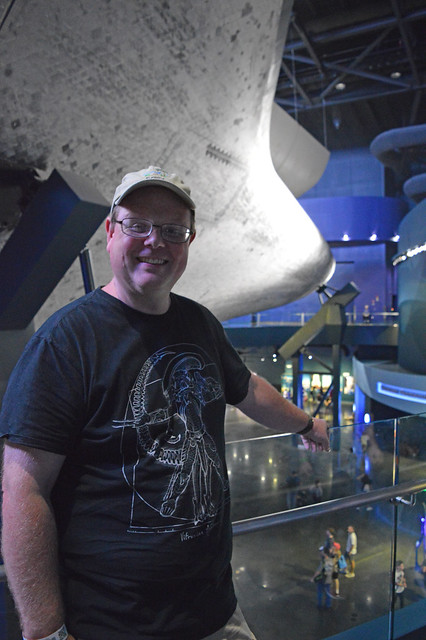 Back in the sunshine, we had a look around and every exhibition area was in the same situation with crazily long lines and ridiculous wait times.  The kids were very moody by this point.  Making our next move wa s like handling a basket of cobras.  Additionally, we knew we still had a few hours in the car before reaching Savannah and rest ahead of us.  It was time to quit while we were less behind.  The Space Center feels like it has expanded to be a Disney or Universal style attraction but without the mechanics to handle the crowd dynamics or to at least keep people entertained and motivated while they stand in lengthy lines.  It was a bum note to end on after our cruise vacation.  Emotional eating is not healthy but sometimes good food is the cure.  Therefore, we found a barbecue joint in Titusville for our dinner pit stop.  Happily some delicious food helped raise everyone’s spirits. 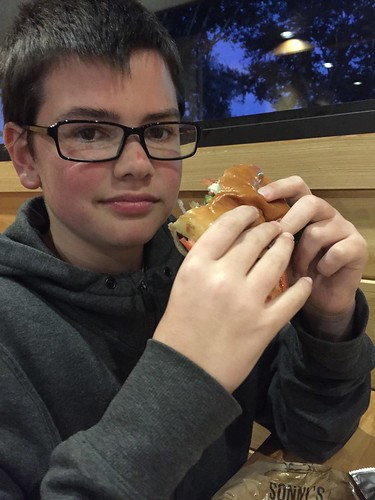 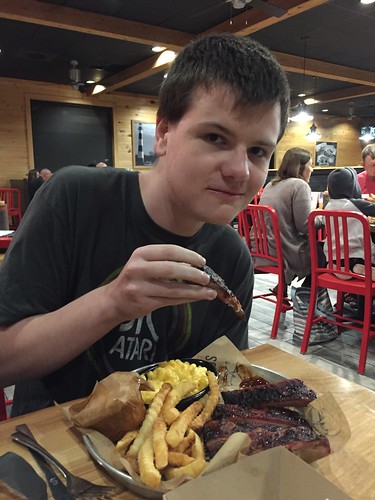