The second and final leg of my birthday trip involved a cemetery.  This will come as no surprise to those who have known me a long time or who have been following this blog for a while.  I love cemeteries of any kind, from poky wee family plots to provincial church graveyards to massive municipal burial grounds.  I am also a family history nerd and this trip combined both of these passions.

Mr Pict is a dual US/UK national (well, we all are now but he has been one from birth) and he has branches of his family that go all the way back to early colonial times, including Mayflower passengers, and a branch that goes back to 16th Century Switzerland.  This latter family, the Stricklers, were Mennonites who were forced to flee Switzerland because of their religious beliefs (Mr Pict’s 10x Great-Grandfather is known as “Conrad the Persecuted”) and they eventually found their way to Pennsylvania in the early 18th Century.  Back in August, I had used a family trip to Buffalo as an excuse to drag the extended family around three cemeteries to “meet” direct line Strickler ancestors.  This time, however, we were seeking to meet ancestors from two generations even further back, including the first Strickler – another Conrad – to emigrate to America.

The weird thing about this cemetery – which is named the Strickler-Miller Cemetery – is that it stands in the grounds of the York County Prison.  It is outside the walls and the barbed wire but is nevertheless plonked so adjacent to the prison facility that we were always in sight of guard towers in what presumably is an exercise yard.  The prison stands on land that my husband’s ancestors once owned and farmed in centuries past so it makes sense that the burial plot is where it is but nevertheless it was a very peculiar feeling to be pootling around a cemetery in the shadow of a prison. 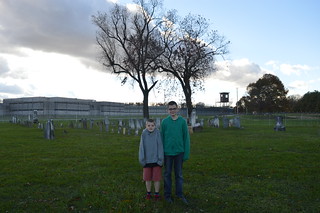 While we had experienced so much success in locating graves in Buffalo, we were much less successful in our explorations in this cemetery – despite it being vastly smaller than those cemeteries.  The issue was the age of the graves we were looking for.  My husband’s 6x Great-Grandfather died in 1771.  I was looking for a small and worn field stone and saw a couple that might be right but could also be entirely wrong.  We did, however, find several collateral ancestors and finally – after much viewing of the eroded transcription from different angles – we found the grave of Mr Pict’s 5x Great-Grandfather, Johannes Strickler, who died in 1795.  We were in pursuit of his wife Elizabeth’s grave when we were thwarted in an unexpected way. 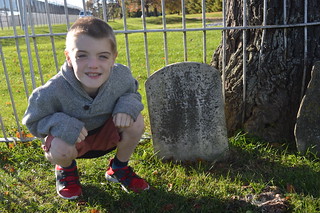 We were methodically wandering up and down the rows of wonky grave markers when a corrections officer drove down the road from the prison to the cemetery, rolled down his window, and ordered us to leave.  We tried to explain why we were in the cemetery but he was having absolutely none of it.  I could have either argued the toss or asked if we could speak to the governor to ask permission, as nothing I had read indicated that we were not allowed to be there.  However, I was not about to argue with an armed man in any circumstances.  Furthermore, the kids were complaining of being cold (the wind chill had picked up), one had accidentally whacked another in the face with his sleeve, and I had twisted my ankle by falling down a grass covered groundhog hole.  It was time to accept defeat and depart of our own accord before we were escorted back to the main road.

It, therefore, was not a wholly successful cemetery trip but the kids were happy to have the prison guard anecdote to share with their classmates on Monday morning.  It’s a risky business being a nerd sometimes.

20 thoughts on “Meeting the Ancestors in Prison”