After departing the House on the Rock and partaking of a cheese and cracker picnic in the car, we journeyed through places named Gotham and Kickapoo and past scores of splattered raccoons to wend our way towards Wisconsin’s share of the Mississippi River.

We had been reliably informed by the internet, various guide books, and by people we spoke to, that the Great River Road – the drive up the side of the Mississippi River – was spectacularly beautiful and that we would be bowled over.  Well, spoiler alert, we were not.  We were instead disappointed and found ourselves wishing we had taken a speedier route in order to buy ourselves more time at the other end of the day.  It may well be the case that the Minnesota side of the River is stunningly scenic and full of breathtaking vistas.  Since we were on the Wisconsin side, however, I can only relate our unanimous opinion that the views were disappointing and the experience deflating.  For much of the route, we could not even see the river from the road, either because of distance or because of visual blocks.  The kids were not at all impressed with the decision making of their parents.  We had many miles of grumping.  This was the first time seeing the Mississippi for our youngest two sons so we found a couple of places to pull over for them to have a proper look.  The first was overlooking a railway embankment and was a pretty grotty view but we thankfully found a second, more scenic spot. 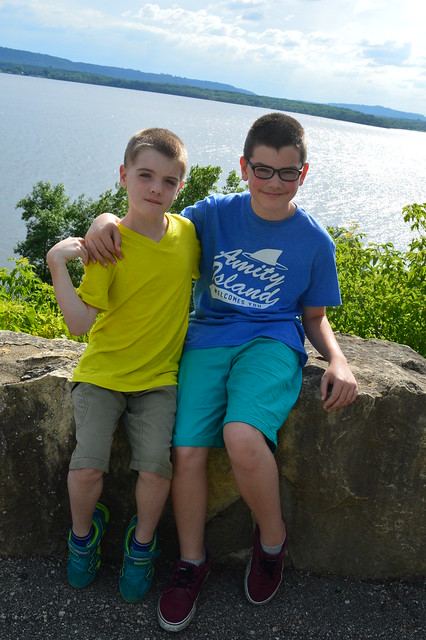 We stopped off in La Crosse for a comfort break and because I had two bits of “Roadside America” I was keen to see.  The first of these was a giant blue baby hatching from an egg.  The sculpture is by an artist named Wolfgang Auer who hails from a German city twinned with La Crosse.  It is made of fibreglass, is 9 feet tall, and I think I read it is supposed to represent the vulnerability of parenthood – though I may be misremembering.  It was originally sited somewhere else in the town but we found it at its new home in the grounds of the town hall. 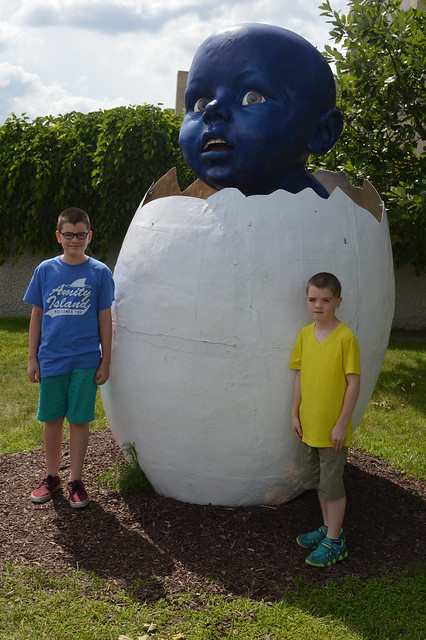 Our second stop in La Crosse was at the Brewery Company to see the World’s Largest Six Pack.  These are actually storage tanks built in the 1960s and subsequently painted to look like cans of beer.  A board in front of the six pack informed us that they hold 7.3 million cans worth of beer, would stretch 565 miles if those cans were lined up, and that you could give one person a six pack of beer each day for over 3000 days just from the contents of these tanks.  A statue of Gambrinus, the King of Beer, was across the street but the road was too busy so I did not cross over to visit him.  Besides, it was time to hit the road again. 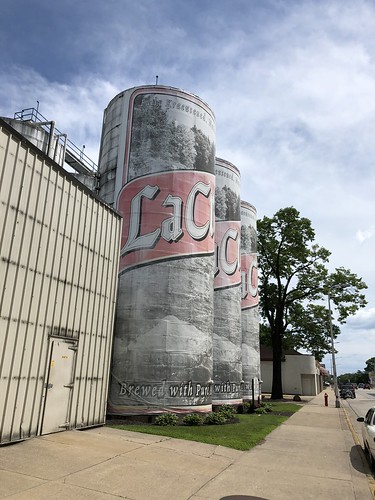 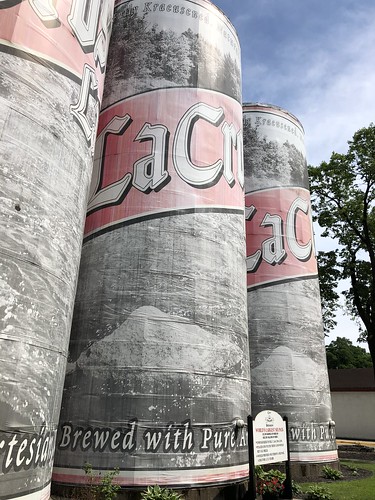 Our destination for the evening was St Paul.  We arrived so late that we did not even countenance doing anything beyond seeing the city skyline.  The kids didn’t even make use of the hotel pool.  Still, it meant I claimed Minnesota as my 32nd state.