On Sunday a very rare event occurred: I found myself at home alone for over an hour.  I decided that this  was such a blue moon alignment of schedules that I was entirely justified in spending the whole time on myself.  Of course, inevitably I pottered around and frittered away time for a bit but I did settle down at my art table, open up my art journal, and set to work.  For the first time in a very long time, I completed an art journal page, from beginning to end, in one setting.  I used the drying time of the first layer for a cup of tea.

I decided to work on last week’s Art Journal Adventure prompt which was the letter G.  As I have mentioned before, I like vague prompts because they are so open-ended but I appreciate having a prompt as a nudge to just get on with something, anything.  I was in a spooky, monster making sort of mood so I decided that G would be for Ghost.  I wanted my ghost to be appearing out of the gloom so I started by making the page dark and gradually pulled in lighter layers while narrowing the focus until I was using white for the highlights on the ghostly figure.  The proportions, especially of the arms, are terrible but who cares really.  It’s only an art journal page and, besides which, she’s a ghost.  Perfection isn’t an option when you are the wailing, moaning, unsettled undead.

Ultimately the outcome on the page is irrelevant.  What really matters is that, after a long period of meagre rations of art time, I got to spend a whole feast of time playing around with art materials and getting messy. 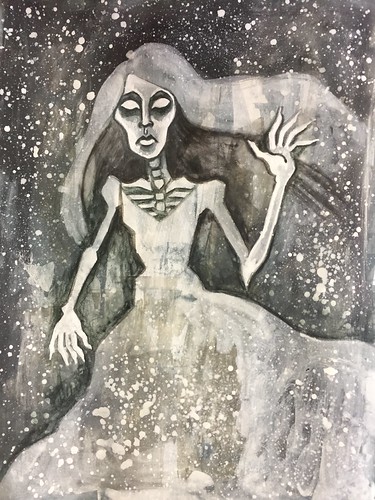