This week’s Art Journal Adventure prompt was to include song lyrics or the title of a song in the art journal page.  You may recall that I enjoy vague prompts that allow my imagination to wander off in all sorts of directions but with music I did not know where to start.  We listen to a lot of music as a family and have very eclectic tastes.  When doing chores, I have music playing so I can karaoke my way through the house and I also always play music when I am at my art table drawing or painting.  I, therefore, could have chosen any number of songs as the inspiration for my page this week.

I thought about springboarding from the last piece of music I had listened to before reading the prompt.  That was Danse Macabre by Saint-Saens which had massive potential as a subject for illustration (and, in fact, I had illustrated it when I was in High School) but I knew I did not have the free time available this week to take on something with that degree of detail.  The last album I listened to in its entirety was Fleetwood Mac’s ‘Rumours’ so I pondered that for a bit.  Meanwhile I asked my kids for suggestions since they are always a great resource for inspiration.  Elvis, Prince, The Beatles, The Beastie Boys, Elton John, The White Stripes and Frank Sinatra all featured in their suggestions but one idea immediately gave me a strong visual: Space Oddity.  As soon as my 10 year old said it, I knew that was going to be the song I depicted on my journal page, perhaps because David Bowie was always so strongly and uniquely visual.

I kept my illustration simple partly out of choice – I do love just plain old pen and ink – and partly out of necessity – my old nemesis, time.  It depicts David Bowie (I hope that is clear even though I am not a good portraitist) floating through space in spacesuit, untethered but calm. I obviously did not use any reference images in creating the spacesuit.  It is definitely more ‘Lost in Space’ than NASA, that’s for sure.  I swithered over including either the song title or the lyric “the stars look very different today” in the illustration but decided against it because a) my calligraphy is not the best and b) I could not work out the placement for the words in the composition.  I hope the song reference is clear without the words. 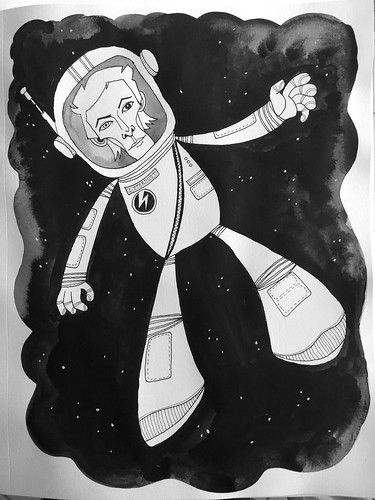