Someone asked me recently if I ever return to past works and have another stab at them in order to apply sharpened skills or a more developed style.  I do return time and again to certain subjects – zombies, Red Riding Hood, skeletal elements, mythology – but I don’t generally have another crack at a past artwork.  I thought, however, that maybe it could be an interesting exercise to take a few works in a medium I am more comfortable with -namely ink and watercolour – and try depicting the exact same subject using mixed media.  I decided to use some of my illustrations from my 100 Faces challenge.

First up for the experiment was my 85th drawing in the series, which I had titled “Confidence”.  I chose it largely because I was working in the red section of my Rainbow Art Journal and I had remembered how much I liked the effect of the bold red ink pooling and puddling.  I also chose it because it was an illustration I actually really liked in the series.  I lost the more diagonal composition, which I definitely prefer, and I think the new version of the face looks more sullen and bored than confident.  I am also not happy with that busy, blotchy background and may paint that out at some stage.  However, as first experiments go, it is not such a failure that I will abandon the whole enterprise.  Not just yet anyway. 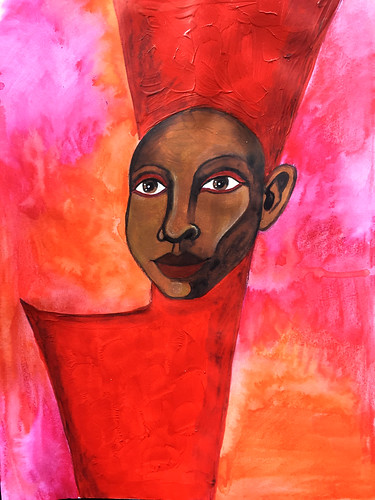