Our second day in Baltimore was dedicated to all things Edgar Allan Poe.  I have been a fan of Poe’s writing since I was a tween – not a super-fan by any stretch but his work is something I have returned to frequently through the years.  Poe was rather itinerant so Baltimore was only one of many cities where he lived and worked.  Indeed, there is a Poe house in Philly that I really must visit some time soon.  It was, however, in Baltimore that he died.  If you have read my blog enough then you will know me to be an avid wanderer of cemeteries and graveyards so the prospect of visiting Poe’s grave was an opportunity I could not pass up.

Westminster Hall and Burying Ground is a charming little spot in an otherwise not so charming area.  The small graveyard predates the church building by over half a century and, as such, the Gothic Revival building straddles the ground below by being placed on top of piers.  The result is a sort of crawlspace under the church.  We could get under it by stooping.  It was pretty fascinating to see since I have never seen anything quite like it.  My kids enjoyed exploring all of the nooks and crannies the space had to offer which was fine by me as it gave me more time to read the memorial inscriptions and study the grave architecture.

Poe, in fact, has two grave sites within the burying ground.  We visited them in reverse chronological order as the second site is imposing and just inside the entry gate.  Poe died in 1849 at the age of just 40.  His death was rather confounding as nobody could figure out why he was in Baltimore and he was in too delirious a state to explain.  He was also wearing clothes that did not belong to him.  Even his cause of death has been lost in the mists of time.  In the end then, Poe’s death was as mysterious as one of his stories.  Apt but sad really.  Anyway, in 1875, with Poe’s literary reputation posthumously established, a group raised enough funds to establish a more impressive memorial in the graveyard.  Poe’s remains were exhumed and he was re-interred at the site, a large block of pale marble on a granite base and a medallion portrait inserted into its face. 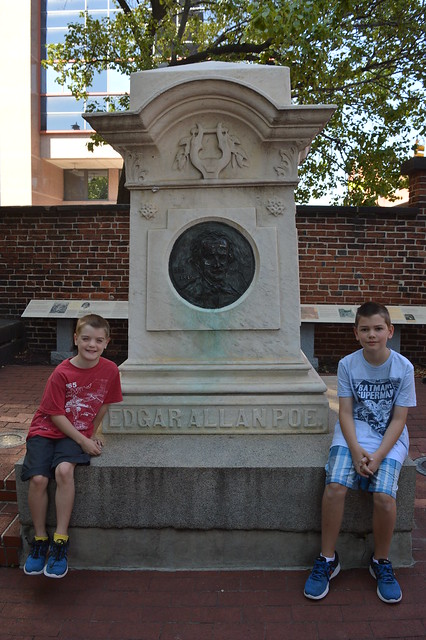 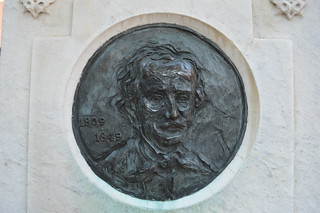 There having been no challenge in locating Poe’s memorial, the boys then scuttled off to see who could find the original grave first.  In such a small space, it again was not difficult to find.  This burial spot had a much more modest headstone with a carving of a raven on it.  This had been a family plot so the grave of Poe’s grandfather was nearby and his brother was also buried in the vicinity.  Poe’s cousin/wife and aunt/mother-in-law had also once been laid to rest in this spot but – like their famous relative – had been relocated to the memorial site. 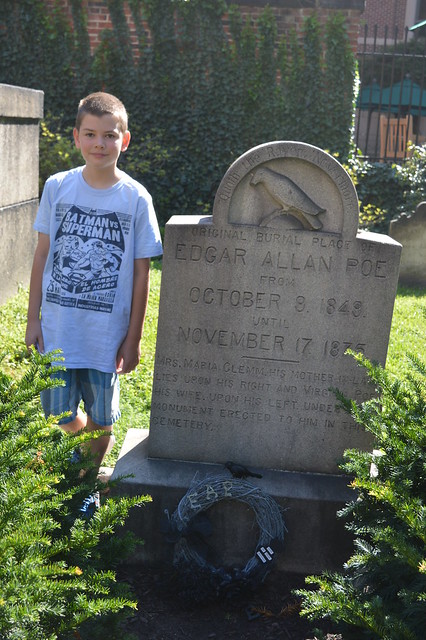 Poe is not the only famous resident of the graveyard, however.  Tucked against an exterior wall is the grave of James McHenry.  He had served as Secretary of War under Washington and Adams, had signed the US Constitution as a delegate representing Maryland, and Fort McHenry named in his honour.  Also of particular interest to me was the grave of Philip Barton Key.  Key, an attorney, was an attorney and the son of Francis Scott Key.  See how niftily I managed to tie up so many of the elements of our Baltimore trip!  He was having an affair with Teresa Bagioli Sickles which very much displeased her husband, despite his own notorious philandering.  The husband, Daniel Sickles, shot Key repeatedly after confronting him on a Washington DC street.  Mr Pict’s ears pricked up at that part.  Not only was the murder victim somewhat famous but so was the murderer.  Dan Sickles was a New York politician and lawyer who later became infamous for almost causing a Union disaster at the Battle of Gettysburg when he moved his troops without orders and with catastrophic results.  The Civil War nerd was, therefore, suddenly interested in the grave.  The murder, however, is interesting for another reason: it was the first time in US legal history that a defence of temporary insanity had been attempted and by gum it worked because Sickles was acquitted.  This was in 1859, before Gettysburg and the loss of his leg, and before his congressional career. 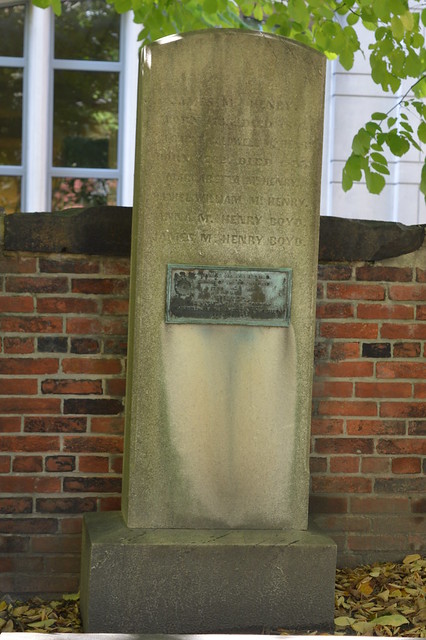 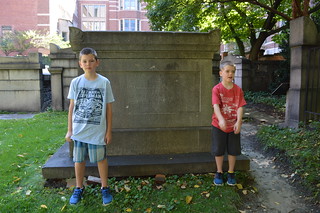 There were other interesting graves in the grounds too, including several more people of historical significance.  One area of the burial ground, very near the underside of the building, was covered in graves belonging to one tragic family.  They were the graves of John and Sarah Brown and four of their children.  Six of their ten children died young, many in early infancy, and Sarah also died prematurely in one of the city’s epidemics.  It was a poignant reminder of the high mortality rates in times past.  There was also a bowed grave, marking the resting place of a veteran of the Revolutionary War.  The raised slab of marble, which was atop four pedestals, had been eroded by the elements and by pollution in such a way that it had buckled into a curve.  I had not seen anything like that before in all my visits to cemeteries.  There were also large, above-ground vaults for various families.  They had fancy looking facades to them but it was interesting to note that the rest of the vault looked rather like a large pipe. 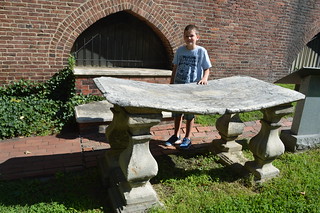 Having seen both of his grave sites, it was a hop, skip, and a jump to go and visit one of Poe’s houses.  The house in Baltimore is actually the earliest surviving house in which Poe lived.  It almost did not survive as it was slated for demolition in the early 1940s but was saved thanks to a Poe society.  It was, therefore, preserved and stands at the end of a terrace of 1930s houses.  It was quite the juxtaposition.  Among the stories Poe wrote while resident in the house were ‘M.S. found in a bottle’, ‘Morella’, and ‘Berenice’. 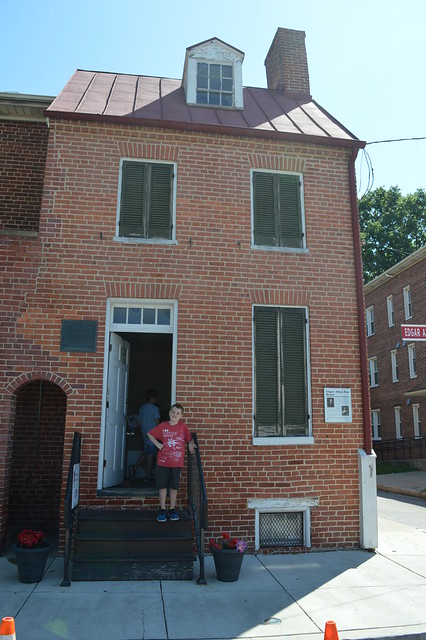 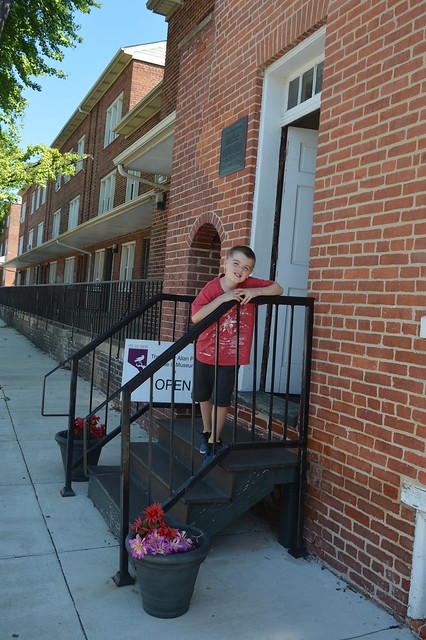 The house was rented by Poe’s aunt, Maria Clemm, who lived there with her mother (Poe’s grandmother), her daughter Virginia (who Poe would marry when she was just 13), her son Henry, and nephew Edgar.  It was a very small house to have accommodated all of those people and it was explained to us that the women would all have slept in one of the rooms while Edgar and Henry shared another room.  The rooms were decorated as they would have been in the 1830s but there was no furniture as part of the reconstruction.  This was probably fairly lucky as there was very little space in each room as it was.  The room the males would have slept in did contain some items linked to Poe, including a chair and his lap sized writing desk.  From that room, a tiny, narrow, winding staircase led up to an attic garrett room which contained a bed, chest, and chair.  The spaces inside the house were dark, gloomy, and more than a little claustrophobic but that actually felt completely apt for Poe’s house. 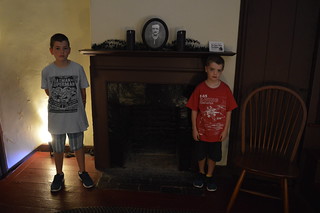 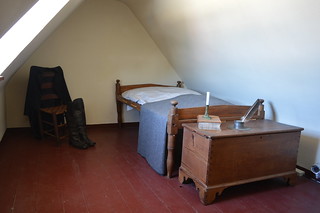 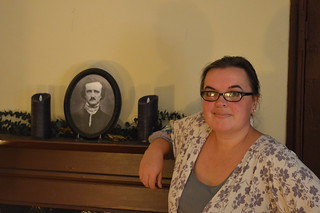 I was thrilled to have visited one of the three remaining houses that Poe once lived in.  I was even more thrilled that the visit inspired by youngest sons to become interested in Poe.  They have subsequently watched a series of animations of short stories and have read the pop-up book of Poe writings we own.