Mr Pict and I were aware that we had planned our family road trip around the things we though the children ought to see and that meant lots of National Parks and incredible landscapes.  Therefore, when we had a gap in the schedule after Slide Rock State Park, we thought we would let the kids decide where to go next.  They unanimously declared that they wanted to go to Bearizona.  We, therefore, left Sedona and headed to Williams and arrived at Bearizona fairly late in the day but, advantageously, as the air began to cool and most visitors began to depart. 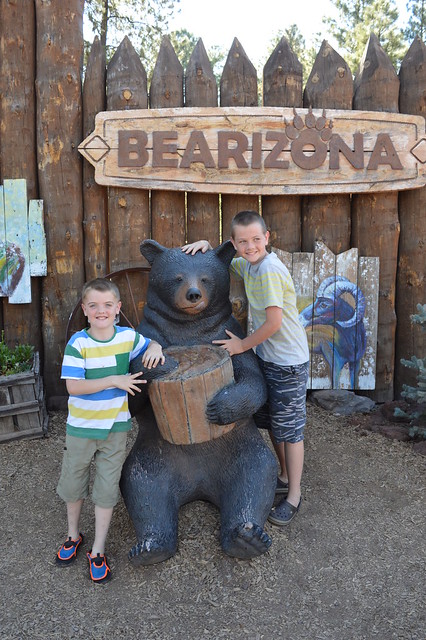 Bearizona is a wildlife park that comprises a drive-through safari area and a walk-through zoo.  We started with the drive-through safari.  We could have hopped on one of the tour buses but opted to take our own (rental) car through so as to ensure we all got the best views possible.  The concept is that this wildlife park showcases animals from the region and, therefore, presents an opportunity to see the local fauna up close but safely.  I think that theme might be stretched somewhat by the inclusion of Alaskan tundra wolves but we won’t quibble with small details.  As soon as we were through the entry gate, we started to spot critters with ease.  A mountain goat was basking and almost glowing in the sun and a little further on some mule deer were munching their dinner from a trough.  We also saw burros before we moved from herbivores to carnivores.  The wolves were milling around, mostly in the shade of the trees, but one white wolf was so close that it brushed against the door of our car.  The kids thought it was magical to be so close to wolves and I must admit it was pretty cool.  From the wolf enclosure, we moved into the juvenile bear area.  I had thought that we would find it hard to see the bears, that they would keep their distance from the road track.  However, despite them having a fairly large area in which to operate, we saw dozens of bears.  Furthermore, they were very active.  That was probably another advantage to having left it late in the day to visit.  A couple of bears were even being playful and were tearing up pieces of bark.  It was a bit of a wow moment to see black bears that close.  The adult black bears, by contrast, were much less active.  While we could still see plenty of them, they were mostly lounging around in various positions.  We also drove through two herds of bison – one white and one standard issue.  We have all encountered bison before (though the kids and I have yet to see them in the wild) but it is always lovely to see them. 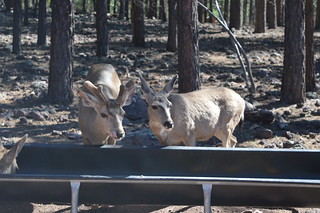 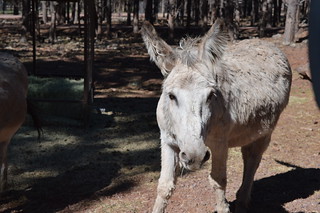 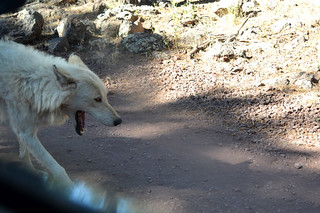 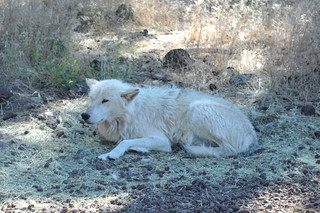 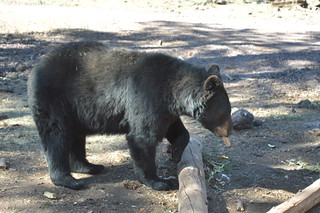 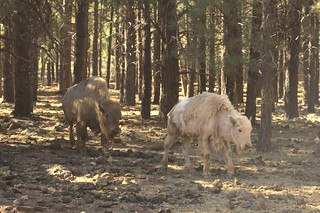 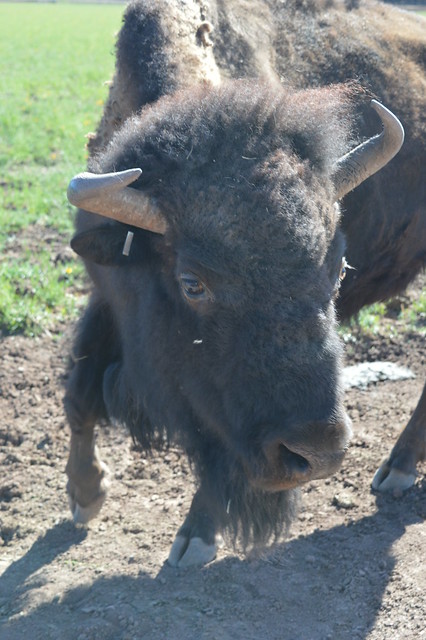 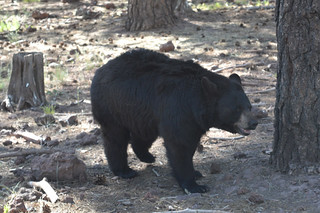 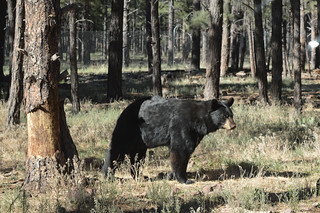 After the drive-through area, we parked up and entered the zoo area.  First up were beavers.  My 10 year old was really excited to see the beavers and especially because they were in the middle of eating dinner so he could see them using their strong teeth to chow down on carrots and other veggies.  I adore porcupines so I was glad to see them.  I love the way they walk with a rolling gait and their sweet, round faces.  My cat daft 8 year old was excited to see bobcats and thought they looked every bit as huggable as our own pet cats.  Lucky for him and for the bobcats, he couldn’t get near them for a cuddle.  I think seeing bobcats and snoozing ringtail cats might have been the highlight of the road trip for him though.  We also saw javelinas – the hairy wee pigs that live in southwestern deserts – and foxes, an American badger, and some playful otters. 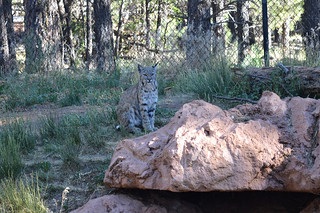 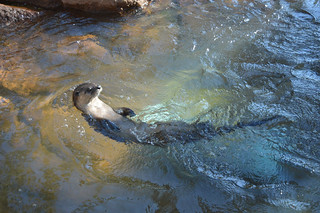 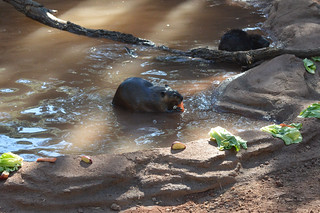 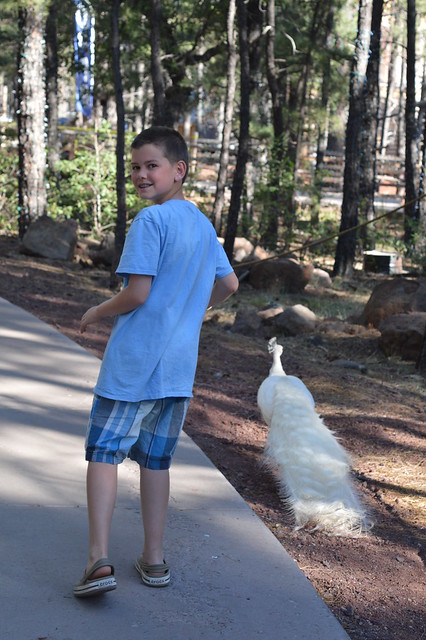 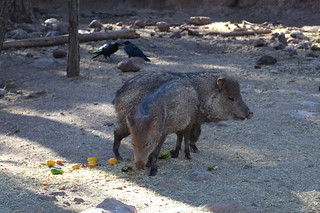 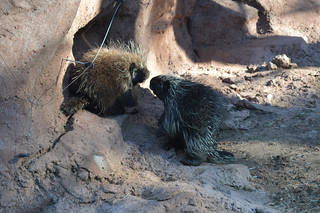 An area the kids really loved was the barnyard area where they could walk among sheep and goats.  The goats were incredibly friendly and the herd pretty much adopted my 8 year old and let him walk in among them.  Another goat seemed to take a shine to my 11 year old and even touched noses with him.  My son was instantly smitten.  We happened to be in the barnyard when the keeper arrived to feed the goats their dinner so she offered to let my kids help her share out the food.  They gladly said yes and were soon holding their hands out while goats and sheep munched straight from their hands.  They absolutely loved it. 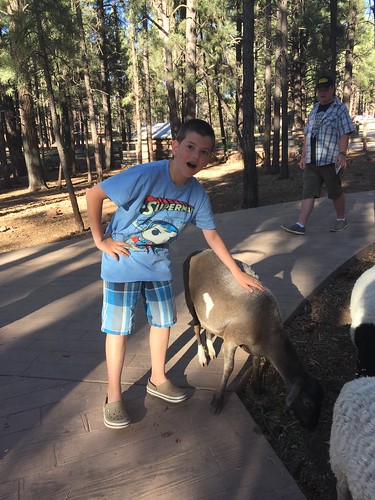 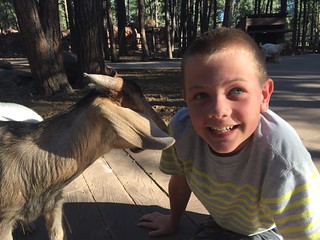 After a visit to the rear of the gift shop and restaurant to see the jaguar roaming around, it was time to leave Bearizona and head back to our Flagstaff base for our last evening in Arizona.  We had another early start ahead of us the next morning.