On the seventh day of our vacation, we decided to drive south from Flagstaff and visit Sedona.  We had an incredibly stressful drive there as we ended up on a road that was barely moving.  It turned out the traffic jam was caused by a blasting zone on the road meaning the workers kept having to halt traffic in both directions.  Even when the cars were moving, they were doing so incredibly slowly because a convoy system was in place.  This was because there had been a landslip or massive rockfall.  The road was virtually impassible at that point and was near impossible to drive for its entire length.  The surface was appallingly uneven.  At one point, a ridge of rubble caught the underside of our rental car which caused me peak stress for the rest of the journey.  The powers that be really ought to have closed the road entirely because it was downright dangerous.

Mr Pict and I were, therefore, super glad when we reached our first destination for the day and could finally get out of the car.  We were at Slide Rock State Park in Oak Creek Canyon.  While Mr Pict and I had been to Sedona before, we had never visited this state park so all six of us were experiencing something for the first time.  We were lucky to arrive as early as we did as the car park was filling up fast.  Indeed, when we left, there was a queue of cars all along the road waiting to enter.  We found where all the hundreds of people were when we reached the creek.  The place was absolutely heaving with people.  The lure of the water on such a baking hot day was understandable and Slide Rock turned out to be a fantastic spot for cooling down in the water.  It was the landlocked equivalent of a beach and I probably loved it even more for not having sand. 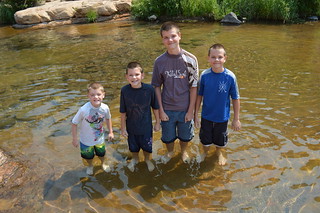 We found a spot to set down our stuff and then straight away my four boys were wading out into the water.  The air temperature may have been extremely hot but the water was ice cold.  Since I was merely paddling, I rather enjoyed the fact my feet turned to glaciers as it cooled the rest of me down.  Being entirely immersed in such frigid water, however, was a whole other challenge.  The kids were moving tentatively through the water until, one by one, they slipped and fell with a splash into the water.  That was one method of acclimating to the temperatures I suppose.  Once they had been drenched, it was much easier for them to just let loose and play. 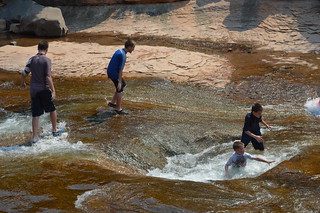 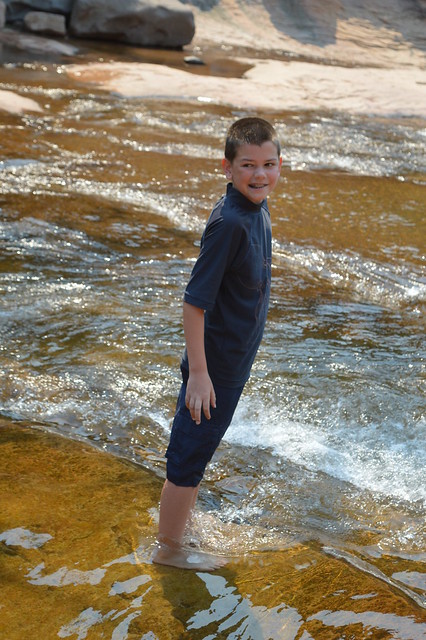 This area is where the creek gradually descends down bumps and through shallow crevices across the smooth surface of sandstone.  There are, therefore, areas for very shallow paddling with sudden (but visually obvious) deep pools of water, there are shallow gorges through which the water crashes at speed, there are wide, deep pools for swimming, and the steep rocks on either side create opportunities for diving in.  It was like a natural swimming pool full of flumes and diving platforms.  Everyone had an absolute blast playing in the water.  Mr Pict and the older boys had several turns at leaping from the rocks and splashing into the pool below.  They also experienced the rush of coursing down the water filled chutes.  The littlest Pict meanwhile was delighted to befriend a group of butterflies who were resting on the silt between the hot red rocks and the chilly water. 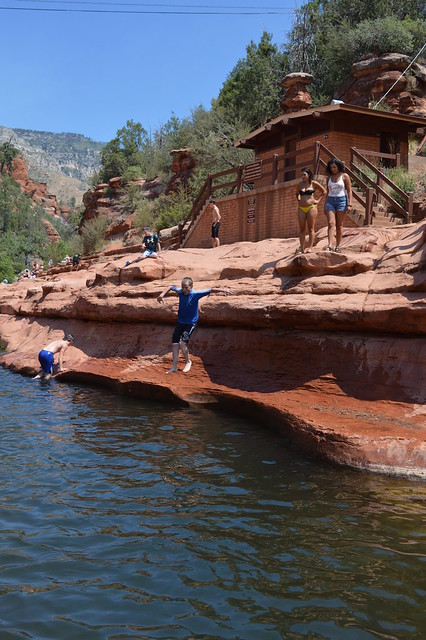 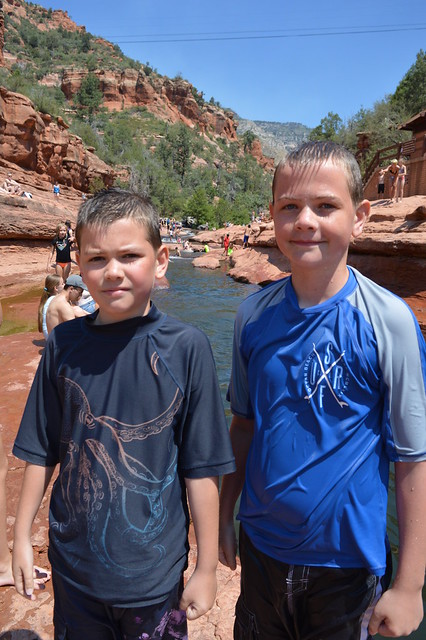 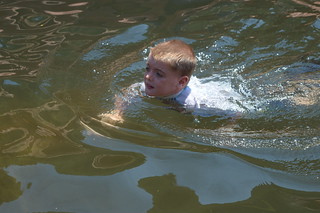 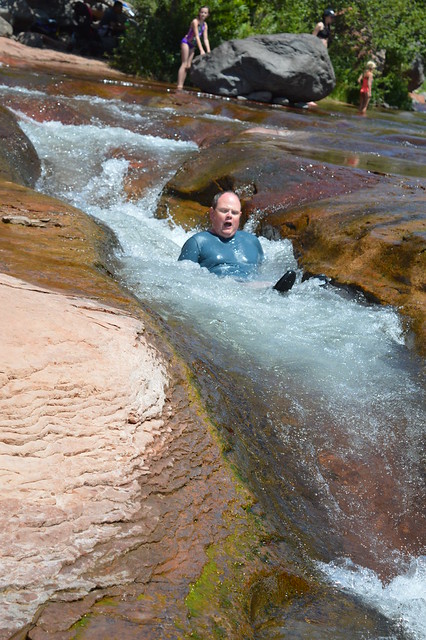 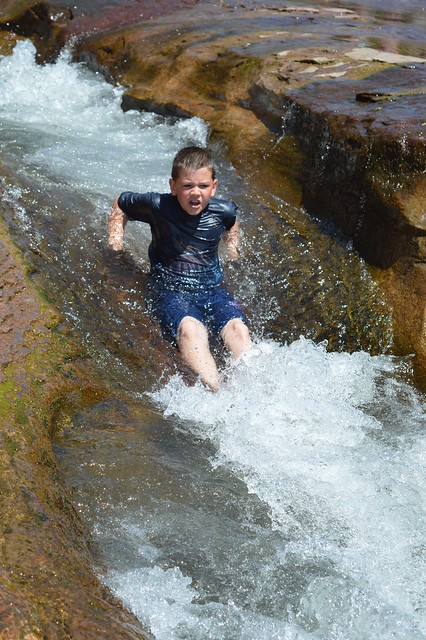 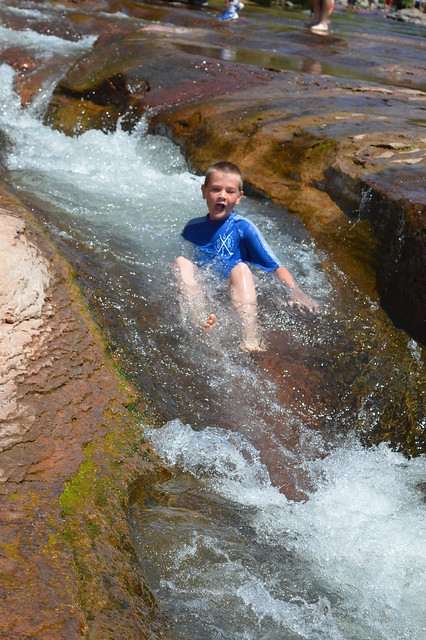 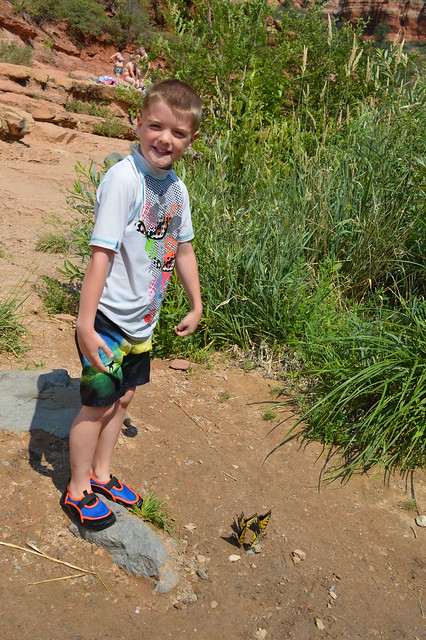 After a morning of exercise, we were ready for some lunch.  We headed into Sedona, parked up, and immediately found a charming Mexican restaurant called Oaxaca.  We welcomed the shade but even more so we welcomed the hearty, flavourful food.  Once more, I opted for a salad that turned out to be so immense I could not finish it.  Mr Pict and the kids all had more traditional Mexican fare, enchiladas and burritos, and declared that they were delicious.  They then shared some desserts as an extra treat.  After that tasty pit stop, we had a brief wander around that end of Sedona.  There were lots of interesting shops to explore if shopping is your thing.  Shopping is not my thing and it decidedly is not my thing when I have four kids in tow.  We, therefore, didn’t spend long in Sedona.  Besides which, we had somewhere else to go onto that day. 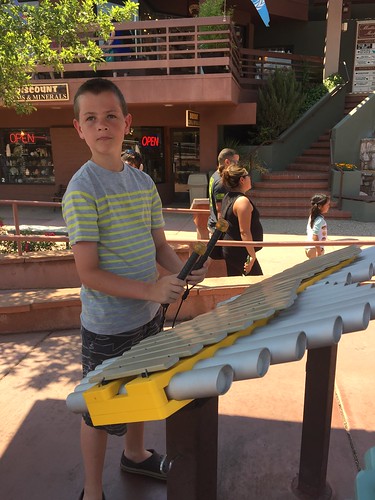 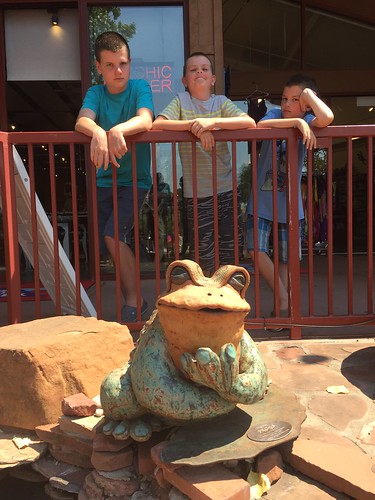 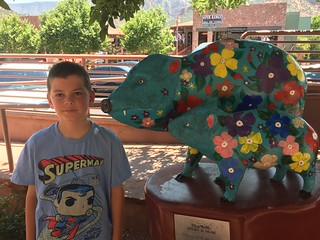