I generally try to make do with the art materials I already own but a couple of months ago, armed with a 60% off coupon and a Michael’s gift card, I had a bit of a splurge.  I thought I could indulge myself since I was paying next to nothing from my own coffers so I bought a set of Dr Ph Martin’s Hydrus watercolours and a pack of Jane Davenport Mermaid Markers.  I had been coveting the Hydrus watercolours for a while.  Since I like to use liquid media very wet but also like the pigment to be punchy and bold, I had a feeling the concentrated watercolours would really appeal to me.  The Mermaid Markers were new to the market but I thought they might make for a good portable art supply and treated myself to them too.

Despite being a hyper organised control freak, I am not one of those people who makes up palette cards for each medium they own.  I tell myself I will make time to do it and yet somehow I just never do.  I did, however, think that my Rainbow Art Journal might be just the place to make a record of some of my media and what the colours look like on paper.  This page in the red section of my Rainbow Art Journal is the first of these.  The product name of the Mermaid Markers initially gave me the idea to illustrate a mermaid; however, I had just been listening to Stravinsky’s Firebird the day before so I decided to draw a sort of harpy, woman-phoenix hybrid, using the markers and some of the Hydrus paints. I worked quickly and loosely as a challenge to myself and because I really wanted to focus on playing with the media.  The mermaid marker is super juicy and richly pigmented.  If all the other colours are the same then I can definitely see those being a handy portable art resource.  The Lobster colour is a bold primary red so I used a lot of that in this illustration.  The hydrus colours added a bit more variety as the cadmium was a red leaning towards orange and the rose had a little blue in it I think to make it more purplish.  The three reds, therefore, provided me with enough variety on this page that I did not feel the need to add any other media except for a little black ink for details such as the face and the talon fingers. 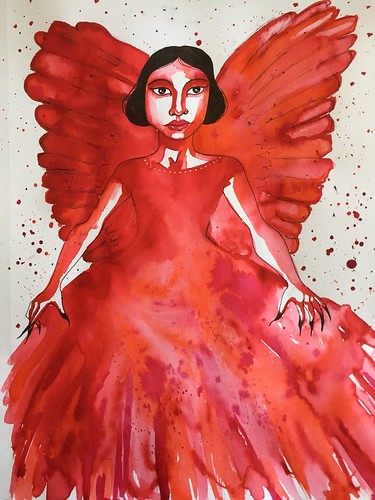