Frequent readers of this blog will know that I really do enjoy a bit of spatter in my art work so I was very happy to learn that spatter was the basis of this week’s Life Book lesson.  The lesson was taken by Mandy Van Goeije and was about starting loose and abstract and then finding some form within that abstraction to turn into an illustration, generating text to support that illustration, and layering watercolour and other media on top of a splattery, puddly watercolour background.

I decided to use the primary colours for my spatter because it was what was demonstrated in the tutorial and because I recognised that it was a palette that I don’t often use.  I often add spatter at some stage in my art work but it was a twist on things to actually use the spatter as the starting point.  I am not someone who tends to get creatively blocked because of having a blank page but I imagine this is a good way to get past that problem. 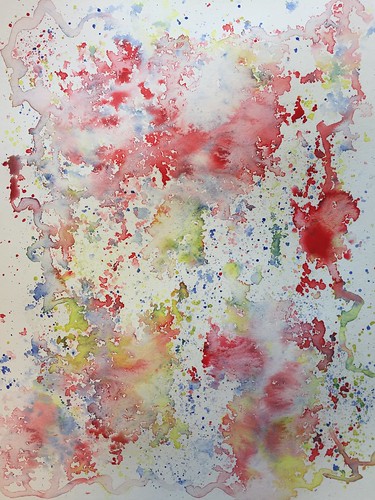 Once I had the spattery layer, I had to look for shapes and forms within it that suggested the starting point for an illustration.  It is human nature to see facial features in inanimate objects (a quick google told me it is called “pareidolia”) and it is something I certainly do.  When looking at my spattery layer, however, the form I saw emerge was a human figure – a tilted head surrounded by red hair and, in the negative space – upraised arms and hands.  I think my brain determining I would see a human figure is probably an extension of the same phenomenon that has people seeing faces.  When coming up with the story element of my art work and the text, I decided my figure should be the Muse of Spatter and wrote “The Muse of Spatter dances wherever she pleases and creates from chaos” as I felt that basically encapsulated the theme of the lesson and what I created as a result of it. 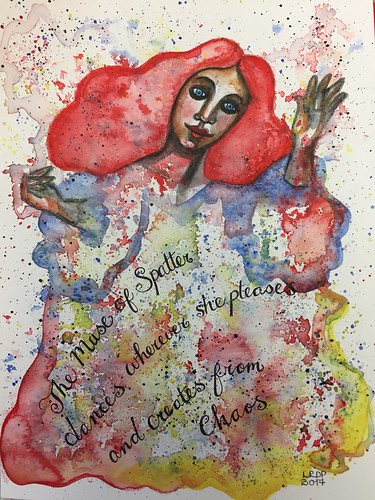 13 thoughts on “The Muse of Spatter”