Last week’s Art Journal Adventure prompt was “Home”.  That can be interpreted in many different ways, physical, emotional, geographical, and it is a theme that has cropped up a few times in my art journal since I started keeping one a few years ago.  This time, however, I decided to keep it super easy and just draw a house, just a quick and simple illustration without putting too much thought into it.  Partly this was so that it would be a challenge to me to work more intuitively and not get so trapped into my head trying to get an idea in my mind’s eye to appear on paper; partly it was because I was so short on time and so this drawing was done, from start to finish, in a mere twenty minutes courtesy of two pre-inked fountain pens (the inks being Noodler’s Bulletproof and Lamy Pacific Blue in case you are interested).  Since I knew I could not even attempt precision, I thought I would accentuate the inevitable weird angles and wobbly lines and produce an entirely wonky house. 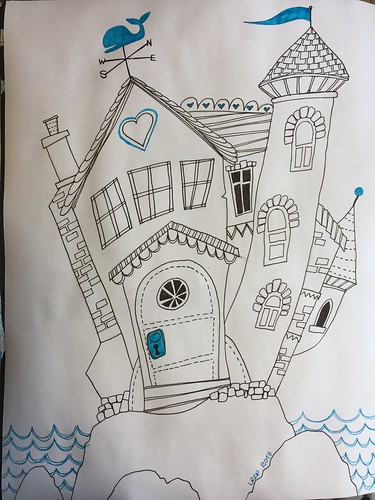