This Sunday the 89th Academy Awards Ceremony will be held in Hollywood.  As a movie nerd, the Oscars are a big deal to me.  I rarely manage to catch any of the other movie awards ceremonies but I do my level best to watch the Oscars each year and now my movie nerd kids are old enough to stay up for at least part of the ceremony too.  Of course, by virtue of having kids and only making it to the cinema once or twice a year without them, these days I have rarely seen any of the movies in contention prior to awards season but I still enjoy the whole thing nevertheless.

A few weeks ago I had a lot of fun with an art journal page filled with illustrations of vintage mug shots.  I was keen to repeat that experiment and thought the Oscars posed the perfect opportunity to try out the not-quite-blind-contour approach once more.  Obviously once I had the basic outline and interior shapes mapped out in pencil through sideways glances, I refined and modified the sketches but only a little because I wanted to retain the looseness of my initital mark making.  The results were entirely mixed when the outcome is considered – and the likenesses are actually woeful – but I had a whole lot of fun drawing these and that is actually what is more important.  These were also relaxing to draw because I could work on them, using pencil and fountain pens, while tucked up on the sofa watching a movie.

Initially I was intending to work through all the nominees in all the major awards categories.  However, I realised I was over-extending myself so I limited myself to the four acting categories only.  The text accompanying each portrait indicates who the portraits depict – or who they are supposed to depict since the likenesses are not exactly accurate.  Some are better than others, of course, but some bear no resemblance whatsoever to the actual person.  I don’t think Natalie Portman or Denzel Washington are about to sue me for insulting their faces and I am not a portraitist so that’s OK . 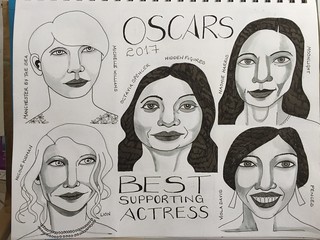 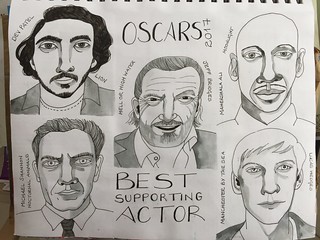 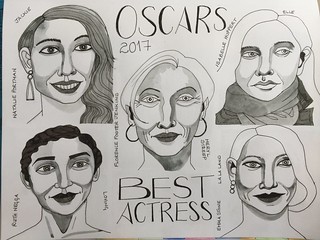 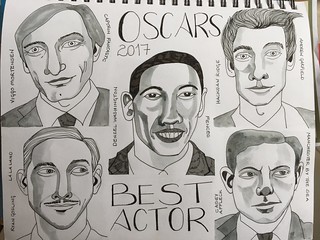