In the Summer months, it seems like the entire of Philly and its suburbs decamps to the Jersey Shore.  I actually know plenty of people who also head to the coast at regular periods throughout the year.  It appears that the Jersey Shore is the destination of choice for most of our neighbours.  We, however, have only been a couple of times.  This is partly because I don’t like sand and partly because we are contrary besoms.  However, it is mostly because none of us find we can relax in crowded settings.  This is even more so in beach settings because of the experience of losing our youngest child on a crowded beach several years ago.  All of which preamble is to explain why it is, over three years since moving to America, we have only been to the Jersey Shore a couple of times.  Since we had an unseasonably nice day for February last weekend, we decided we should expand our explorations of New Jersey’s coastline and head to Cape May.

Suspecting the beach would still be chilly, we made the focus of our trip the Cape May County Zoo.  The zoo is free which appeals to my thrifty nature but had me concerned about the welfare standards.  Thankfully I was wrong to be cynical as the enclosures actually seemed well designed and considered.

We headed first to the reptile and amphibian house.  The kids and I always spend a lot of time in these areas at zoos so we wanted to prioritise having enough time there.  We were pleased that so many of the snakes, lizards, and frogs were on display in their tanks as quite often they are tucked away in little hollows and can barely be seen.  There were snakes large and small from places near and far; a variety of turtles, including one who was very crinkly and spiky looking; a large alligator; brightly coloured frogs and a chubby frog squashed in the corner of its tank; axolotls and newts; and an iguana riding on a tortoise’s back. 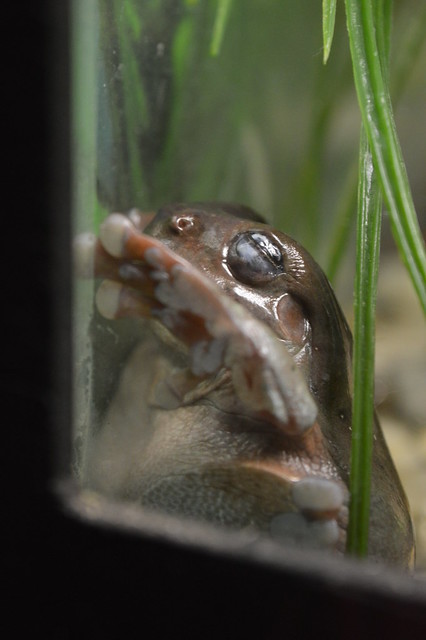 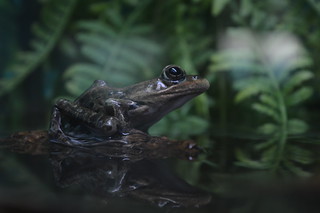 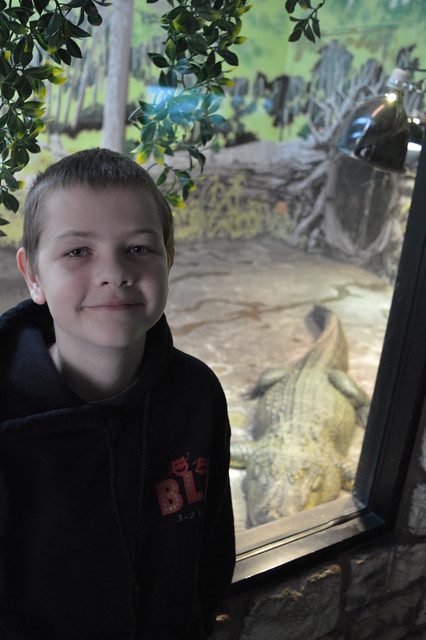 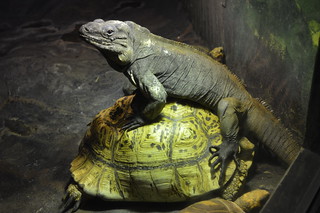 With the exception of the tiger, which refused to put in an appearance, the mammals too were all out and about and easy for us to see.  My 9 year old was eager to see marsupials for some reason so was delighted to see wallabies lazing around in the sun, looking like they were watching Netflix on the sofa.  We also got to see a brace of black bears.  Aside from the baby black bear that ran across the road in front of us in West Virginia last summer, it was the closest any of us had been to a black bear since one of them was walking right along the fence line.  Its companion, meanwhile, was lying on its back with one leg up in the air against a fence.  In addition to seeing the lions, we heard the male roar.  It was an incredible sound, only the second time my kids have heard a real life lion roar, though the sight of the lions lolling around like large moggies was a bit less awe-inspiring.  There were also leopards – traditional and snow varieties – and a red panda, zebra, giraffes, ostriches, lemurs, and bison. 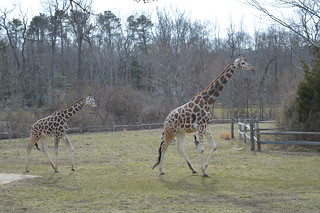 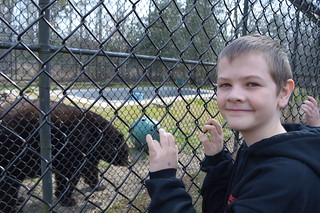 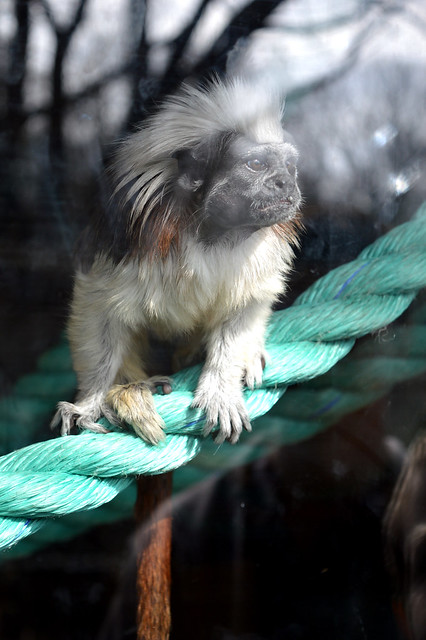 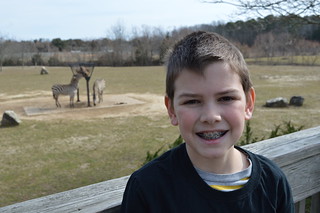 We didn’t see all of the animals that inhabit the zoo (there are apparently over 250 species) but because admission was free we didn’t feel like we had to push things and see every last creature.  I would have kept going but the kids were rapidly escalating their hunger levels from peckish to rampagingly hangry so we decided to leave while the going was good and go in search of food.

After a very tasty sojourn in a Mediterranean diner, we headed for the actual shore.  It would have been cruel and unusual of us parents to take the kids to the Jersey Shore for the day and not actually let them anywhere near the beach.  The coast was decidedly chiller than even a short jaunt inland and the sky was darkening quickly but the kids were still determined to have fun.  We forget sometimes that these kids were used to playing on beaches year round on the west coast of Scotland and are pretty hardy and determined as a result.  They all kicked off their shoes within minutes and, while two of them did a sort of Chariots of Fire run along the sand, two of them lifted up their trouser legs to have a bit of a paddle in the Atlantic.  A bit of a paddle, however, turned into a wade and – before we could even issue a warning they would no doubt have ignored anyway – two of them ended up soaked.  Their answer was to just peel off their sodden trousers and continue playing in the surf.  Our youngest child was, therefore, frolicking in the sea with bare legs and a winter coat.  He looked hysterically ridiculous but he was having an absolute whale of a time.  Sometimes the boys just really need to be feral in the great outdoors. 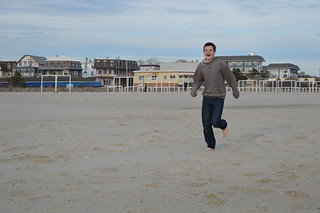 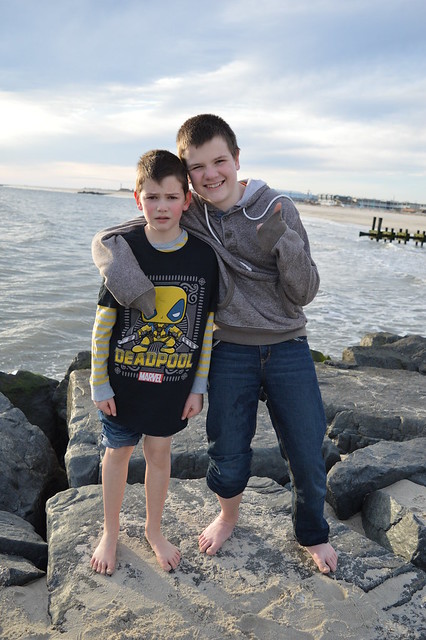 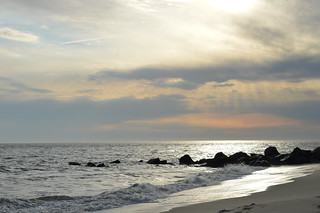 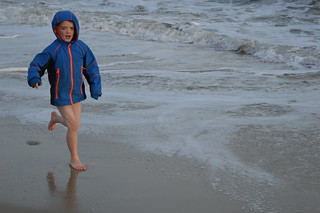 I couldn’t come to the coast and not see a lighthouse so our final destination for the day, as day slipped into night, was the Cape May Lighthouse.   The current lighthouse was built in 1859 and is the third incarnation of a lighthouse at that spot.  I guess third time was the charm.  I arrived too late to enter the lighthouse so I just had to content myself with looking at it.  Maybe some day I will return and force myself up the claustrophobic spiral staircase in order to see the view. 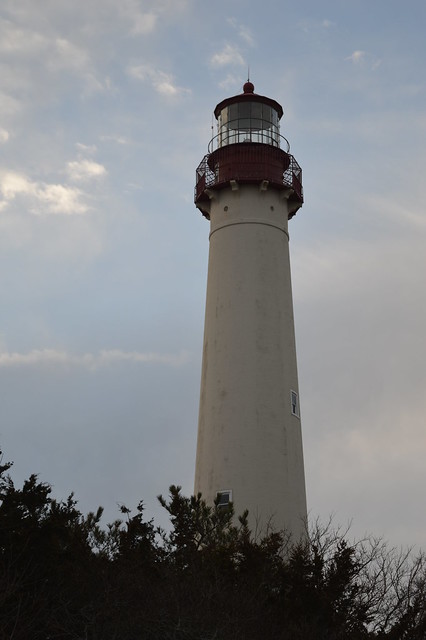 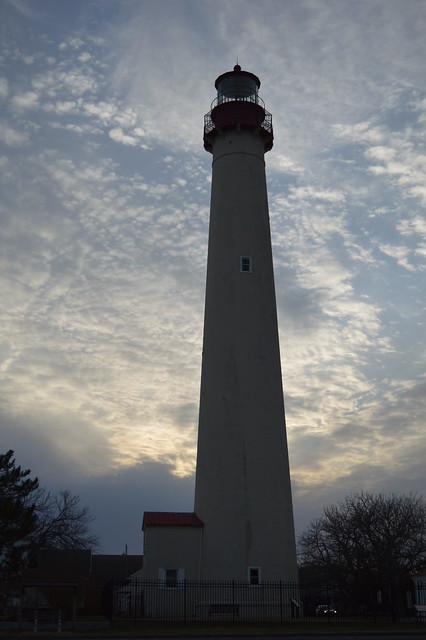