I am a big Alfred Hitchcock fan, have been since childhood.  I think I started with the ‘…Presents’ TV show and then got into the movies but it may have been the other way around.  I was so wee that I can’t actually remember.  ‘Vertigo’ is my favourite movie after ‘Jaws’.  I also love ‘Shadow of a Doubt’ and ‘Rear Window’.  When I first visited Northern California, back in 2000, I made sure I visited several filming locations of Hitchcock movies.  These included Bodega Bay where I ran around like a nitwit pretending I was being attacked by birds, as I am sure when visitors do.  ‘The Birds’ is one of those movies I enjoy precisely because it defies resolution in the same way that I enjoy ‘The Shining‘.  I won’t discuss it more so as to not risk spoiling it for any reader who has not seen it but I like that it is ambiguous and mysterious.  I think it contributes to its unsettling atmosphere.  My mother, on the other hand, absolutely hates ‘The Birds’ for the same reason.  All of which preamble is to explain why I chose to draw an iconic scene from ‘The Birds’ – based on the movie poster indeed – as the next illustration in my Inktober sketchbook.  You will note that I still pretty much suck at drawing birds.  These are definitely cousins to my Raven. 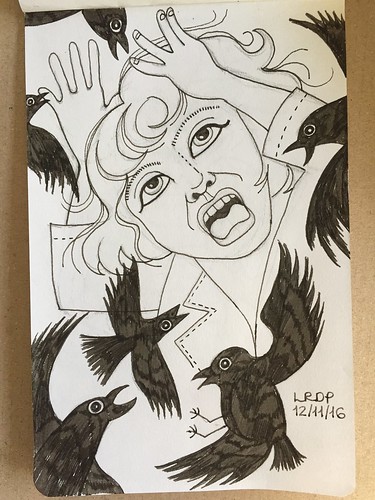