Incredibly, today marks three years – three whole years – since I started this blog.  I never would have imagined I would be capable of keeping this blog going for three years but here I am.

It is easy to remember my blog anniversary because I embarked on it a week after emigrating to the US from Scotland.  Therefore, my immigration and my blog have always been inextricably linked.  It was a friend who suggested that I start a blog so that folks back home could see what I was up to (though actually the overwhelming majority just use Facebook to do so) and so that I could have a record, for posterity, of my initial responses and reactions to my new life and experiences.  For at least the  first year, that really was the theme that dominated: finding my feet as a stranger in a strange land.  There were lots of rants as I tried to navigate American bureaucracy, lots of observations about differences between Britain and America, and lots of first experiences.  Gradually, however, by the second year, posts about those sorts of topics became less numerous and instead I started posting about my art work and about family life and about our various trips, travels and experiences as a family.  It’s not that I am not still struggling with some aspects of American life because I sincerely and surely am.  It is just that I don’t post about those things because they are either repetitive (I still hate the road system and it makes me neurotic and anxious) or boring (the tax system here is labyrinthine and even most Americans don’t understand it so I stand no chance) or too private for now (an ongoing battle with a particular authority regarding Civil Rights that causes me sleepless nights and awful stress).

So, for this blog anniversary, instead of a more traditional review I am going to do a version of something I did last December and review the search terms that are bringing people to my blog.  Since that blog post was all words, this time I thought I might illustrate it with some quick, silly drawings.  I picked five not quite at random but five among those that I thought might have a strong visual element to them.  This is what I ended up with.

I regularly get people turning up at my blog looking for Helen of Troy.  Who knew she was quite so popular?  Whatever these searchers are looking for, I do hope they find some sort of answer when they land on my Helen of Troy drawing.  But they probably don’t.  I am encouraged that so many people are into the classics though.  The “for kids” bit of the search term throws me a bit.  Are they looking for a child-friendly translation of The Iliad?  Anyway, in my mind I converted this search term into Helen’s abduction by a pair of kids who have her trussed up in their wagon. 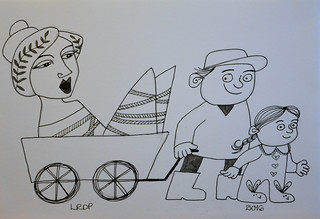 Lots and lots of people wash up on the shores of my blog because they are searching for some sort of art inspiration.  I do wonder what that says about the appeal of the rest of my blog’s content but never mind.  This search term sparked an idea, however, in that the word “art” could be a noun and was probably intended as such but it could also, just about, be a verb – I know my kids and I talk about “arting”.  Let’s just pretend it is grammatically correct for the sake of my brain segue.  I imagined mixed up, Picasso-like animals engaged in making art. 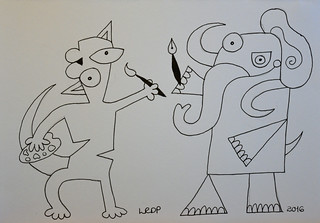 It’s great that so many people are looking for ways to introduce kids to the great artists.  I hope my Mondrian History of Art lesson with my kids gave someone some ideas.  Their search term made me think of Piet Mondrian campaigning for kids, being “for” something in the sense of protest.  I, therefore, drew him with a placard that alludes to his style.  My 10 year old asked why on earth I was drawing Hitler.  Oh dear. 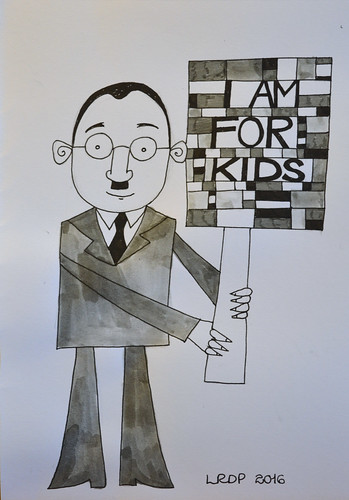 My minotaur drawing gets a lot of visitors even two years after I drew him.  Any suggestions as to why people are conducting internet searches for minotaurs?  This particular search term made me think of a minotaur being sneaky and tip-toeing around the labyrinth. 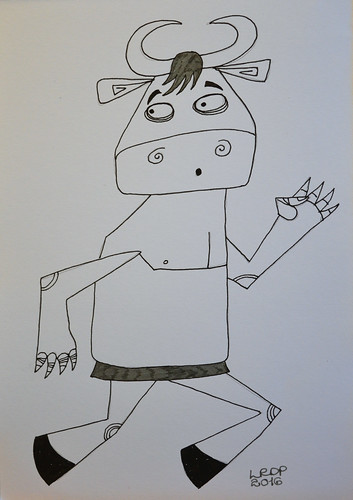 This is one of those search terms I just cannot resolve.  What on earth was this person trying to find?  My assumption is that they arrived at my blog because “pa” is the PA of Pennsylvania but why would they be googling for packing tape in Pennsylvania?  Just go the store and get some tape.  No need to google it.  But if it is “pa” in the sense of father or grandfather then what is the connection between the older male relative and the need for packing tape?  I don’t know that I want the answer but that latter interpretation formed the basis of my drawing. 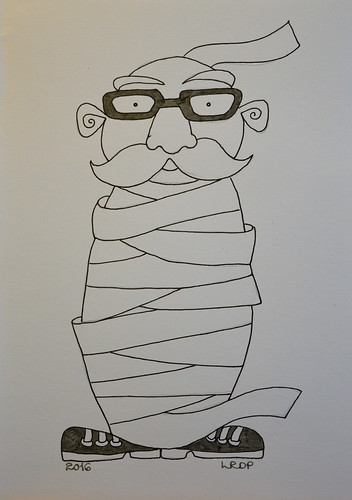