I was not feeling immediately inspired by either prompt today and, since I don’t have time in the day to ruminate and await a visit from the inky muse, I decided to just crack on with my own thing.  I definitely have a Halloween /  monster / horror theme emerging in my Inktober sketchbook so I decided to continue in that vein without encroaching on the territory of future prompts.  Since I recently convinced my oldest son to read the complete works of Edgar Allan Poe, I decided to draw a raven.  I suspect The Raven is by far and away Poe’s most famous work though I personally am a fan of Annabel Lee, the Masque of the Red Death, and Ligeia.  And now I want to reread Poe.  I am actually rather fond of crows and ravens.  I know a lot of people find them repugnant or creepy but I love the glossy sheen of their black feathers, their sturdy shape, and their intellect.  This was just a super-quick drawing – ten minutes from beginning to end – so I don’t think I have done the raven justice but I like this as a starting point.  Perhaps I will turn it into a lino block print or more developed and detailed ink drawing at some stage. 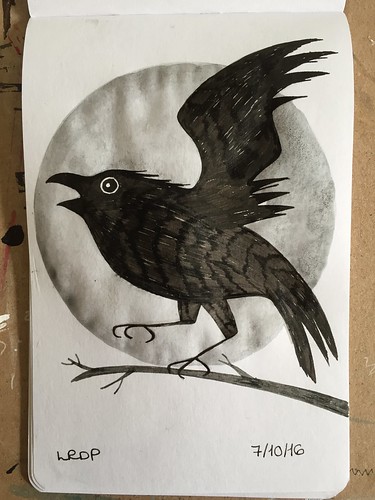