By taking short cuts, I actually managed to find time for two art lessons from last week.  It also helped that my kids had friends over to play so they were occupied and I could find a chunk of time in which to sit at my kitchen table and get arty and make a start on this piece.

Last week’s Let’s Face It lesson was taken by Kara Bullock and was more practice in drawing the face along with hands.  It also involved using white gesso to paint the face and hands in greyscale.  That was not something I had done before and I was surprised by how much I enjoyed it.  Perhaps that was because it almost felt like drawing with gesso rather than treating the gesso like paint.  I do also really like creating pieces that are monochromatic or have very limited palettes so I added very little in the way of colour to the areas of flesh in the figure and face and I kept the background grungy and neutral.  The background that Bullock demonstrated in the tutorial was really very different from the one I ended up with but it was the creation of the background that was my major shortcut for this piece so I had to try something new.  Her background had been pretty textural and grungy, however, so I tried to generate that same sort of feeling but in a different way.  By way of contrast to all the texture and grunge, however, I added a disc of bronze paint behind the figure.  I do love to add discs and halos surrounding the figures in my art work.  I don’t know why.  I just go with it. 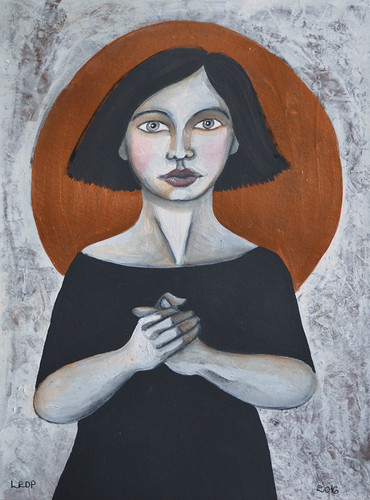 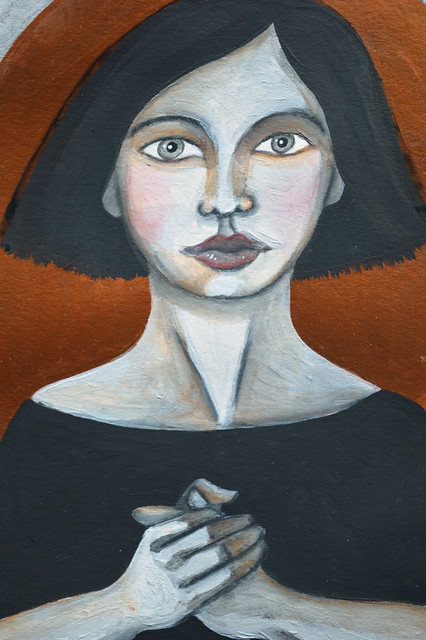 16 thoughts on “Girl with Bronze Disc”