After making sock monsters a few weeks ago, my 9 year old has been well and truly bitten by the sock transformation bug.  Every few days he is looking to eke out time to sew a sock and turn it into something cuddly.  I may have to create a security system for our socks soon to keep them safe from his scissors and needles.  He and I are also making his Halloween costume.  My sewing related stress levels are soaring yet somehow I keep encouraging him.  Maybe some day he will be doing all of the sewing repairs in the household.

Most of his monsters have just evolved from the meeting of sock, thread and buttons but then he decided that he wanted to aim for a specific outcome.  He wanted to make a Cthulhu.  Mr Pict is into Lovecraft (and a board game called Eldritch Horror) and I have painted Cthulhu twice, despite not being a Lovecraft fan, so I guess that sewed the seeds of the Cthulhu plan.

He picked out a black sock with which to construct his Cthulhu and then he found a black glove (also in my sock orphanage) for the tentacled bit of the face.  Orange and red buttons became the fiery eyes and he used some black felt for the wings.  I think he did a fantastic job.  The best praise he received came from his brothers who all declared it to be amazing and to wish they had a sock Cthulhu too.  He was beaming from ear to ear. 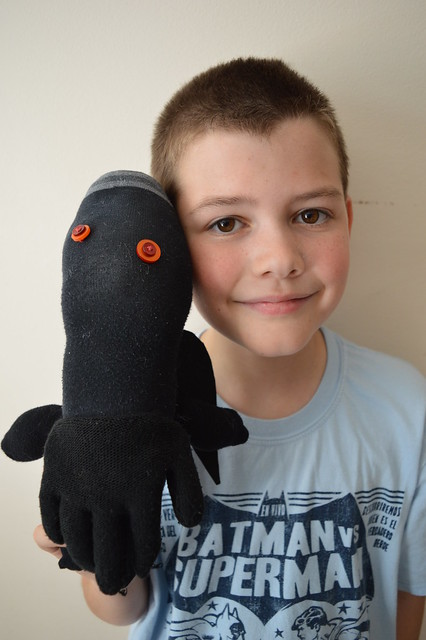 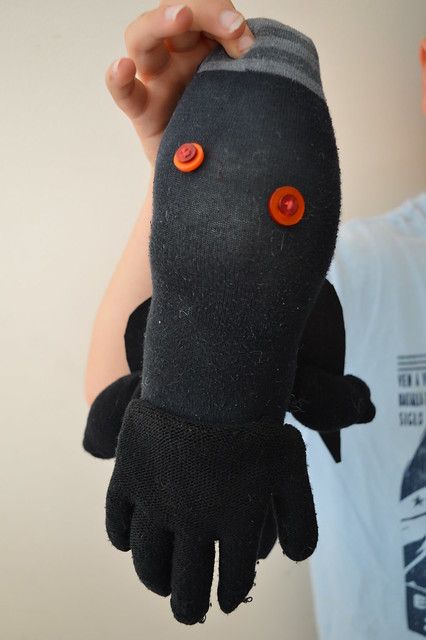 PS  If you like monsters crafted from textiles then you should totally check out the wonderful creations to be found on the CrawCrafts Beastie Blog.  Helen’s Beasties are a monstrous marvel and an inspiration to my wee monster crafter.