On the twelfth day of our road trip, we found ourselves winding up the sides of the Appalachians, flitting between sparsely populated, rural West Virginia and pockets of charming little hamlets in Virginia.  I was very taken with the beautiful wild flowers edging the roads.  Even on the busier roads, the verges were like colourful meadows.

It was just as well it was all so pretty because we spent entirely too long on these winding roads having gotten lost and taken a wrong turn that required us to double back and take an alternative, even more zig-zagging route to our destination.  Two of our children suffer from car sickness so we had to pull the car over a couple of times.  At the end of the day, our youngest was fist pumping in celebration of having beaten his previous record and filled a dozen bags with vomit. Through it all I tried to focus on the  pretty wildflowers.

We also had a couple of wildlife encounters.  The less exciting one was that we found a turtle moseying across the road at an alarmingly slow pace.  Knowing it was likely to get pancaked, we halted the car so I could get out and move the turtle.  As I reached down to scoop it up, however, it decided that was the time to get a wriggle on and it darted from my grasp but in the opposite direction to where it had been headed.  What then followed was a minute or so of me scurrying around after a turtle that was doing the equivalent of handbrake turns and looking like some sort of hybrid of Dr Doolittle and the Keystone Cops.  Far more excitingly, however, WE SAW A BEAR.  We were reaching the crest of a particular steep stretch of road and I was just looking up from the latest bag of puke I had tied up when I saw the dark shape clambering the grass verge to our left.  I yelled, “Bear!” so suddenly and loudly that Mr Pict automatically breaked (which was OK as we were the only car on the road).  And there was indeed a baby black bear scrambling up the slope towards the treeline. By the time I got my phone out of my pocket, the bear was gone and my photo opportunity was missed.  We waited for a good few minutes in the hope that it might reappear or even that its mother or siblings might appear but nothing more stirred and we finally had to move on.  We were, however, all terribly excited to have seen a wild bear. 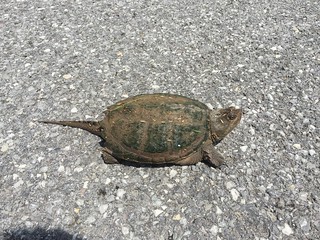 After our meandering route, being waylaid by the pukers, and the stop for bear spotting and turtle rescuing, it was late morning by the time we arrived at Cass where we planned on taking the scenic railroad.  Our intention had been to take a railroad trip from Cass up to the summit of Bald Knob, a local mountain, but we had missed that train by a couple of hours.  In fact, we were lucky to be able to take any train whatsoever as the last train of the day was due to depart just 15 minutes after we arrived.  The tickets turned out to be pricier than we had expected but we felt we could not very well have gone through all of that palaver just to turn around and go all the way back again.  It transpired the Bald Knob excursion would have taken us 4 hours so it was possibly lucky we did not end up doing that.  The tickets we bought were for a 2 hour trip to Whittaker Station, a recreated logging camp, and back. 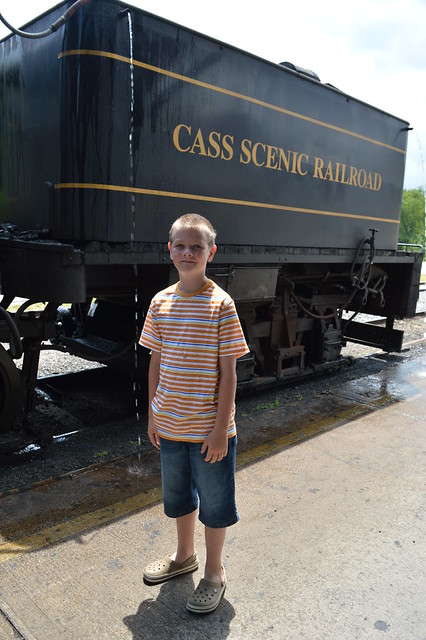 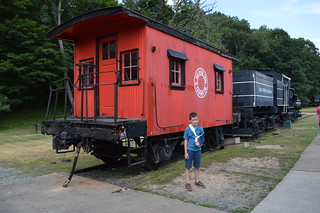 We had no sooner boarded the open sided railcars – converted log cars – and sat ourselves on the benches than we were off on our trip.  Cass was founded in the very early 1900s as a company town serving a lumber operation so the first site that pulled into view was the ruins of the large sawmill.  We were informed that at one time this was the largest double-banded sawmill in the world.  It was so rusty and derelict that I would have loved to have gotten out and explored it but we chuffed on.  We then passed the sheds where we could see two of the Shay engines owned by the railroad.  I know almost absolutely zilch about railway history but we were given the distinct impression that these were a big deal. 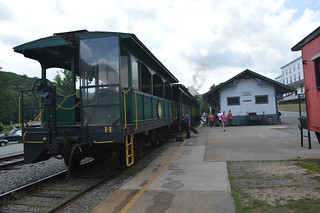 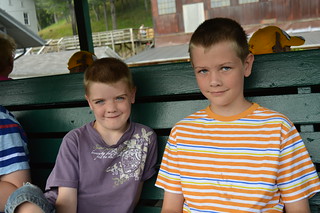 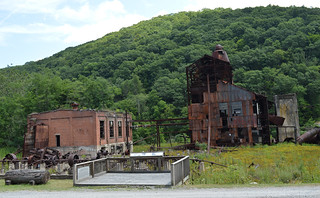 We were being pulled and pushed by Shay engine number 4 and there was one chap shovelling a ton of coal just to get us up and down Black Allegheny Mountain.  I write that the engine was both pulling and pushing us because the standard gauge had two switchbacks to allow for the gradient of the hill.  Therefore, sometimes the engine was behind the railcars and other times it was in front of them.  The gradient was 5% until the second switchback when it became 9%. 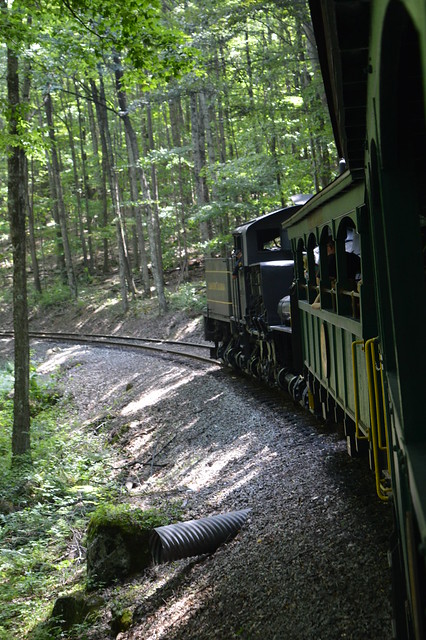 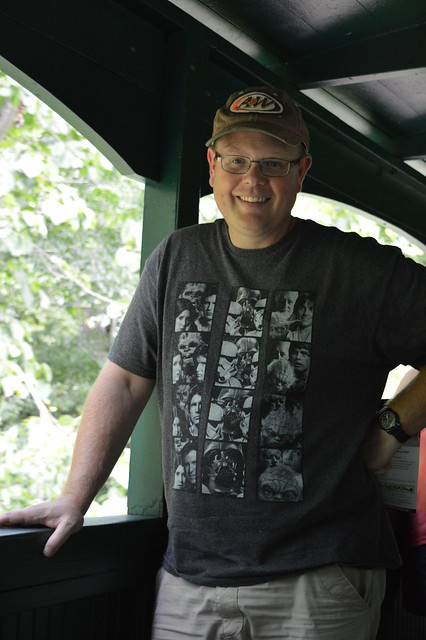 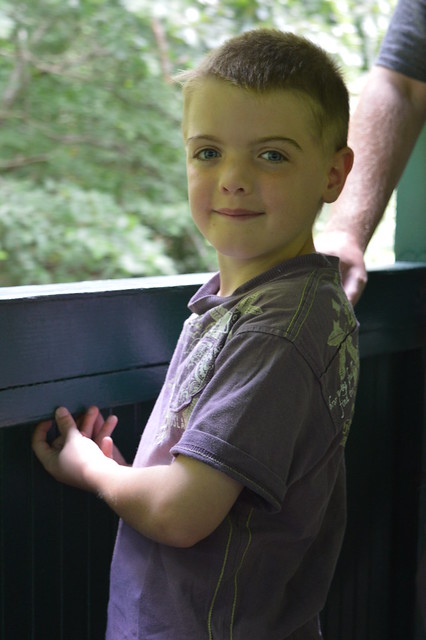 The train emerged from the trees into a clearing which was the site of a recreated logging camp.  The clearing had once been the camp for the immigrant workers who constructed the railway line but it was now being used to demonstrate what a typical logging camp of the 1940s would have looked like – logging having ceased there in 1960.   According to my phone, the elevation at the Whittaker Station was 3280 and at Cass was 2470 so that was the measure of the journey we had made. 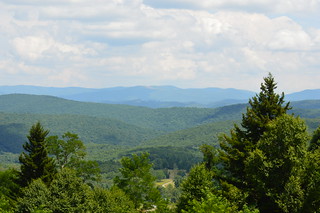 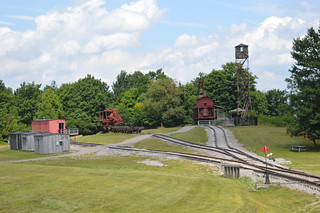 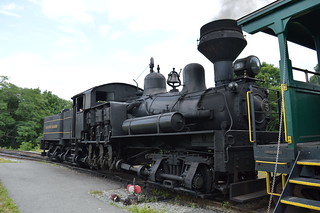 We wandered around and had a look into the wooden shanties.  Some of these were set up as work huts, where the saws were sharpened for instance, and others were set up to show the accommodation the loggers would have stayed in.  There was also a dining car where the workers would have been fed by the camp cook.  There were then several pieces of large mechanical equipment I admit I did not fully understand but which were clearly used for moving massive logs around.  Apparently one of these – a Lidgerwood Tower Skidder – is one of only two left in the whole world.  I know as little about industrial history as I do railroad history so I entirely failed to absorb the information I was reading. 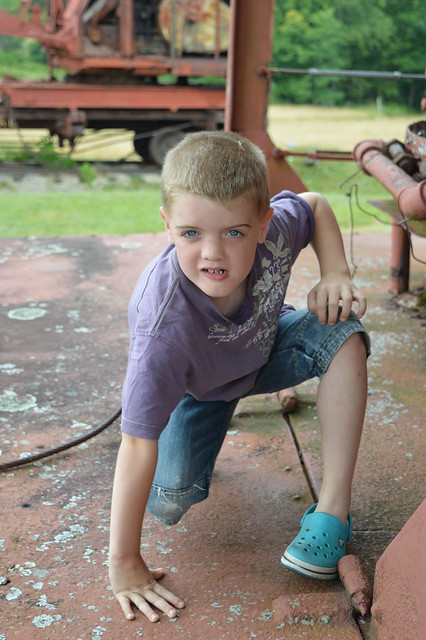 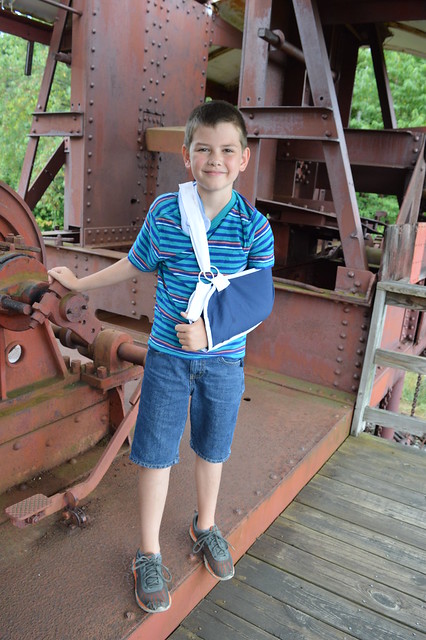 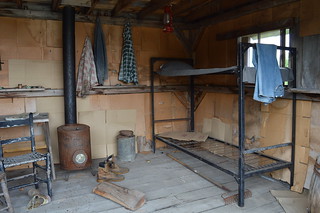 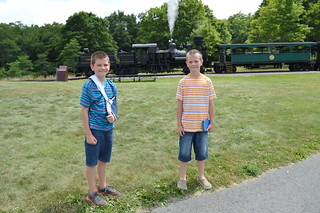 After some refreshments, we boarded the railcars again and headed back down the mountain.  The boys played on some of the old locomotives and cabooses set up near the Cass station but soon we had to make tracks. 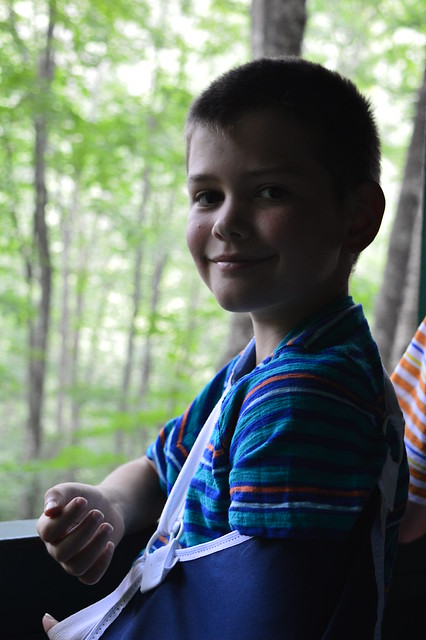 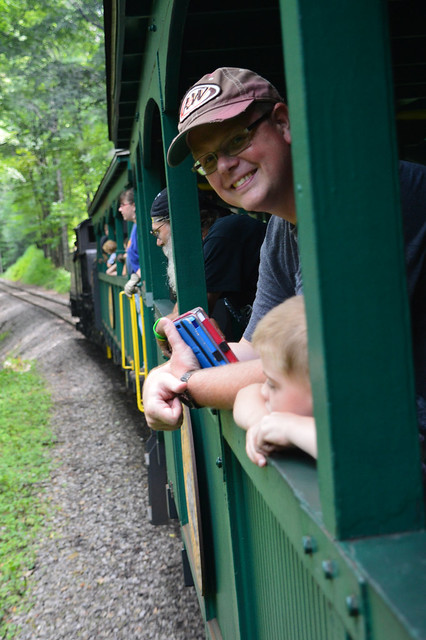 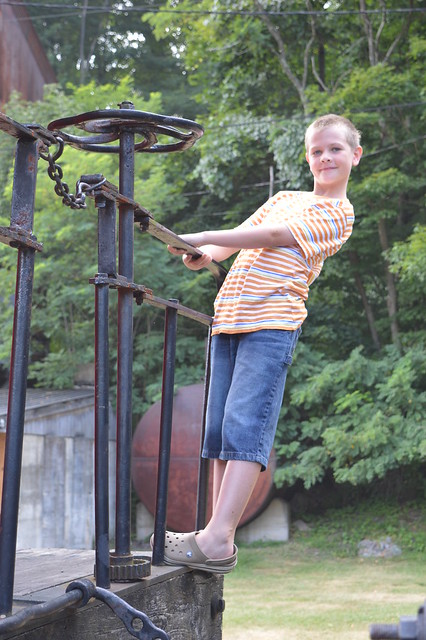 Back down the mountains we drove with more groaning from nauseous children and more barf bags being filled and no more exciting wildlife to distract and excite us.  We passed the birthplace of the author Pearl Buck. Not even I could muster enthusiasm for that.  We felt like we were on a road to nowhere.  We were all getting fractious, parents included.

And then we were saved by the Civil War.

Although my husband is a Civil War nerd, he had not actually planned this little detour.  It was just serendipity.  We needed some fresh air and to stretch our legs and he got to visit another Civil War battle site.  Win-win.  The Battle of Droop Mountain occurred in November 1863 when Confederate forces attempted to stop Union troops passing through the area to meet up with other troops and destroy Confederate railway lines.  After a brief but bloody fight, the Union forces won the day and consequently pretty much took West Virginia since the Confederates collapsed and gave up. 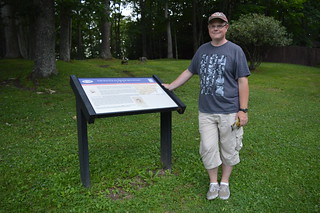 Something like 400 men died at Droop Mountain.  Apparently the unknown Confederate dead were removed to a cemetery in Lewisburg.  Some must have remained, however, as there was a small moss covered plot at the edge of the woods containing worn headstones.  There was something very poignant about it, about how remote it was, how untended, the way it was being consumed by nature. 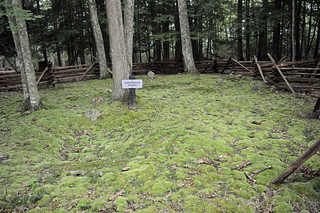 As dusk began to settle, my feral kids wandered around the site, spotted deer lurking in the dark shadows of the woods, and we climbed up a modern watch tower to get a good view of the surrounding landscape.  The place had meaning for Mr Pict and he was soon deciphering the view in relation to what had happened in 1863 but to the rest of us it was just a welcome break from the car and some respite from the winding roads. 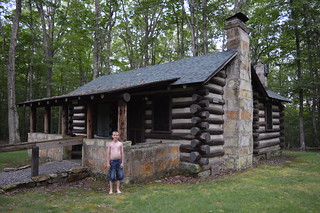 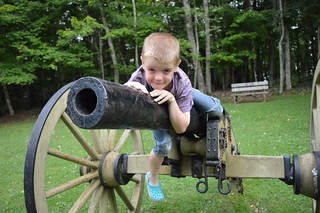 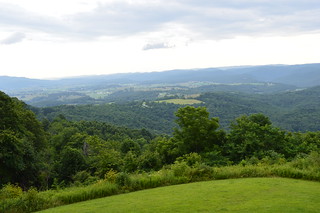 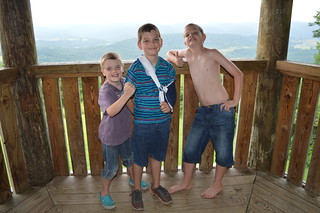 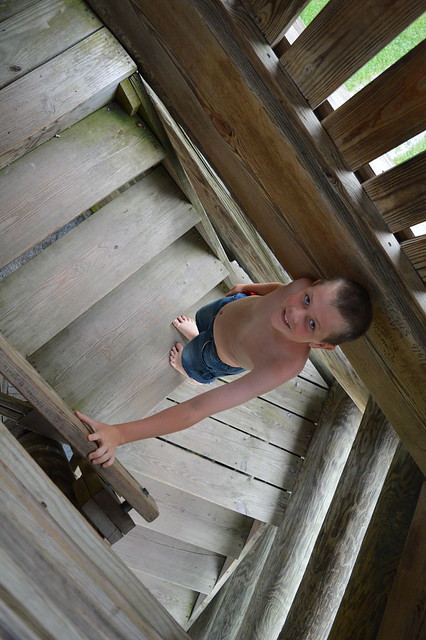 Our room for the night was a ramshackle motel in Harrisonburg, Virginia.  It was a spacious room and we all had adequate sleeping space but the place was beat up and had definitely seen better days.  The kids moaned about the parsimonious internet but I was more concerned about the fact the air conditioning was preset and could not be adjusted.  Worse still was the fact that the orange blinking light on the phone would not switch off no matter what we did so I felt like I was napping on a helipad all night.  Not good.  It was a cruddy end to a day that had ultimately been a bit of a bust.  The railroad trip was pleasant enough but we had wasted the better part of a day on it so it did not, for us anyway, represent the best utilisation of our time.  We just had to keep reminding ourselves that had we not taken the road to Cass – indeed had we not taken the wrong road to Cass – then we never would have seen the bear.  Bears win.