On our last night in the vacation house in Grand Haven, Mr Pict and I were woken abruptly at 1.30am by a piercing yell.  Our 9 year old had fallen from the top bunk bed and his arm was hurting.  It was hurting a lot.  I had a good look at the arm, got him to move his fingers, looked at the shoulder blade and collar bone, and nothing seemed amiss visually.  But the level of pain he was experiencing in his upper arm was excruciating.  His father and I suspected it was broken.  We hoped it wasn’t but the only way to know for sure was to take him to the ER.

So at 2am, Mr Pict drove off to the ER with our little hurt one while I stayed home for the other three kids – who had amazingly slept through all the noise and hubbub.  They returned at 5am with the news that it was indeed broken.  It was a clean snap right through the front upper arm bone.  The ER doctor had put him in a splint and sling and told us to give him standard over the counter pain meds to manage the pain.  Our poor wee chap was officially broken in bone and in spirit.  He could see the rest of this road trip and summer vacation before him as being a long  and miserable struggle.

Remarkably I have made it over 40 years having never broken a bone in my body and over 13 years as a parent without one of my kids breaking a bone.  I am, as such, no expert in such matters.  However, even in our sleep deprived and addled states, Mr Pict and I felt we needed a second opinion as to the whole issue of the splint.  Our 9 year old could barely function with it as it held his arm at a 90 degree angle and was so padded that he could not get a clean shirt on.  We had to leave Grand Haven that day, however, and head to Chicago.  We needed to seek out a second opinion in Chicago.

We had crappy internet access in Grand Haven yet the internet still managed to help me as I reached out to a group of friends I call my Mommapedia and set them to googling and researching while we drove to Chicago.  They came up trumps and so upon arriving in the city we immediately headed to the Illinois Bone and Joint Institute that was running a walk-in clinic.  Exasperatingly and despite a change in time zones we arrived just too late for the walk-in service.  The receptionist, however, was sympathetic to our situation and asked if a doctor would still see our son.  Happily one would.

The upshot was that this doctor determined that there was no need for the splint.  The sling would keep the upper arm immobile enough since a clean break should start knitting back together pretty quickly in a 9 year old.  He had to be mindful of his arm and not allow it to get knocked or hurt in any way but the splint could definitely come off.  He recommended a follow up with an orthopedic doctor back home in a few weeks time.  That was it.  As parents, all we could do was trust the expert.  The 9 year old was elated to lose the splint.

As experiences go, this was not the first any of us anticipated or desired from our vacation.  Life does like to chuck those curve balls at us, doesn’t it? 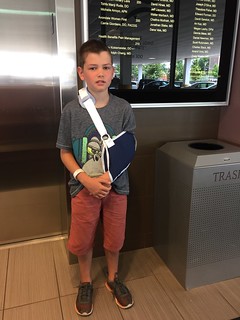