I have a clown phobia.  It is part of a more generalised phobia of circuses but, while it is possible I would be able to just about tolerate a circus, there is no way whatsoever that I would be able to tolerate a clown.  It doesn’t have to be a creepy clown or a miserable clown.  It can be a jovial clown one would happily hire to entertain a group of kids and I would still be a wreck.  I think a lot of people who suffer from coulrophobia (the official term for a clown phobia) were triggered by some exposure to horror movie clowns, maybe on the cover of a video or a poster.  I, however, have had my clown and circus phobia from prior to ever seeing such a thing.  While I cannot say for sure, I think it was one specific trip to a circus that was the kernel for my fear.

I was probably about five and visiting my grandparents in Aberdeen and my parents took us kids to a circus that had set up near the beach – a beach my Dad was always phobic of because of childhood tales of  slavers pinching kids from the shore and which I always hated because it was always freezing when we went.  But I digress.  The circus was awful.  It was cheap and nasty and stank.  I have a strong smell memory of the reek of damp straw, the tangy ammonia of pee, and of animal faeces.  The smell of damp straw still makes me gag a little as a result.  The quality of the show was abysmal.  Each performer was playing multiple roles inside and outside of the show ring so, for example, the woman who was the dog trainer was also the lead acrobat and the assistant for knife throwing and had also sold us the tickets at the door.  Jack of all trades and absolutely master of none.  It was slipshod and ramshackle and woefully amateur.  One of the things I remember about the same small troupe performing all the roles was that they would rush to change costumes as if that would stop us from spotting that they were understaffed.  And the reason I remember that is because the men who were the clowns were in costumes and make-up that was disturbingly haphazard and ragged.  It was the face paint that got me.  It was all splatter and smears.  It was entirely disturbing.  I am actually feeling a bit queasy just conjuring it up in my mind’s eye in order to describe it.  It freaked me out.  I wanted to leave immediately that they appeared.  I had entirely reached my limit for tolerating the circus.  The freakily faced clowns pushed me over my threshold.  But for whatever reason, we stuck it out.  My clown and circus phobia was born.

All of which preamble is to explain that this week’s Let’s Face It lesson got right under my skin because, upon opening the email, I was faced with a painting of a female clown.  Nope.  No way.  There was just no way I was going to paint a clown, even a pretty one with very minimal make-up, just a red nose and painted cheeks.  Absolutely no way.  I watched the video by this week’s tutor Olga Furman up to a point and, when I felt she was getting into clown detail territory, I had to quit watching.  I know it is illogical, entirely silly and immature even, but that is what makes it a phobia, right?  So once again I improvised.  The essential elements of the lesson were to paint the portrait in greyscale and then add a small smattering of colour to the face and to have the monochrome elements stand out against a bright background and clothing details.

I did not do very well with this lesson.  Mostly it was because I was in a rush (again!) because with my kids with me 24/7 now my art time has been reduced, and I also knew I had to get the piece finished in one sitting as I had to tidy away my art area to make room for guests who are visiting this weekend, but partly I think I just wasn’t “into” the lesson because I kept thinking about ruddy clowns.  Fingers crossed for no more art lessons involving clowns then. 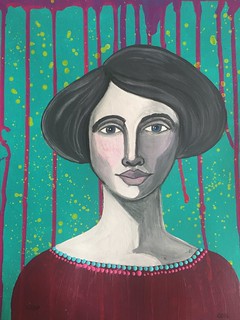 11 thoughts on “Coulrophobia and Colour”