This past weekend we visited a World War 2 history festival at Graeme Park.  The park is a historic site in Horsham, to the north of Philadelphia and, therefore, not too far from where we live.  It was the summer residence of Sir William Keith, an 18th Century Governor of Pennsylvania and Delaware.  While the mansion is still called Keith House, the park is named for the next generation of residents to live there.  Our visit, however, was not about the eighteenth century but was all about the Second World War.  We will have to return some other time to learn the history of the property and park. 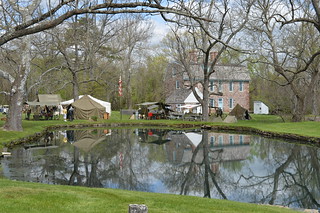 Mr Pict and I are history fanatics and we, therefore, grab every opportunity we can to engage the children in history.  Military history is not especially my thing but I accept that most history events and festivals will be dominated by major conflicts from across the centuries.  Indeed, the Chalke Valley History Festival that we attended last year on our trip back to the UK was themed around different periods of military history with some social history tacked on for good measure.

First up was a small aeroplane, minus its tail and wings, that the kids were permitted to climb inside.  They enjoyed taking turns pretending to be pilots.  Then we arrived at some stalls where genuine artifacts and memorabilia were being sold alongside replicas and war themed toys.  The kids always enjoy things like flea markets, boot fairs, and jumble sails so they had a great time rooting around.  Mr Pict and I were amused to see that toys from our childhoods, such as little plastic soldier figures and Action Men (GI Joes in the US) were being sold as “vintage”.  My oldest son and I also had a wee tour of some military vehicles and classic cars from the 1940s.  He chose a cream Chrysler as his favourite whereas I liked a sapphire blue Lincoln best. 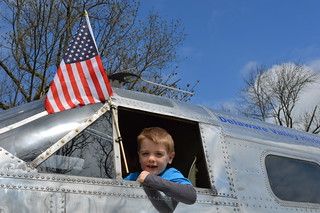 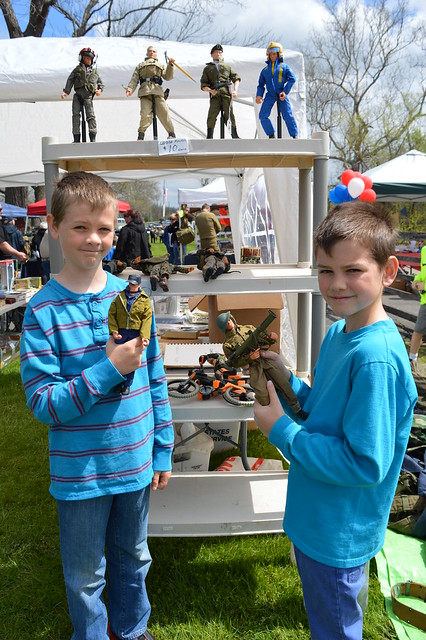 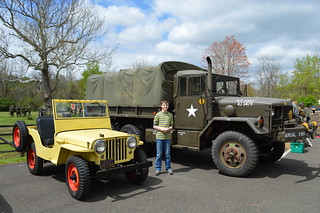 Then it was time to watch a reenactment of American infantry troops moving across a field towards SS and Wehrmacht troops who were occupying a farm house and adjacent land.  It was interesting to watch the maneuvres and the strategic use of the limited land forms but I think the kids would have engaged more had there been an MC commentating and explaining what was happening.  They did like all the gunfire and explosions, however, and liked trying to predict which soldiers were going to “die” next.

Next up was an Abbot and Costello tribute act.  I grew up watching Abbot and Costello movies so I introduced my boys to them a few years ago.  They love the movies that crossover with the Universal monsters.  The tribute duo were skilled impersonators and were great at the rat-a-tat-tat high speed repartee but, as you might expect, the jokes were a bit dated for the kids to always “get” the punch line.  They did enjoy the puns, however, and my oldest found an elaborate, extended pun about a baseball game amusing. 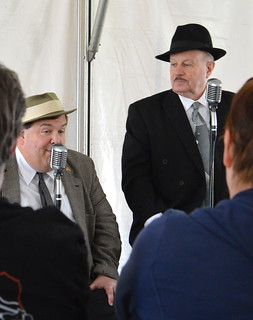 We then wandered around the encampment while the boys munched on pretzels (of course, because we cannot go on any outing without them consuming pretzels).  We saw reenacters depicting woodland defences and firing from foxholes, a few more military vehicles, and “soldiers” sitting outside their tents to eat their lunches.  We also did some dancing to Glen Miller music. 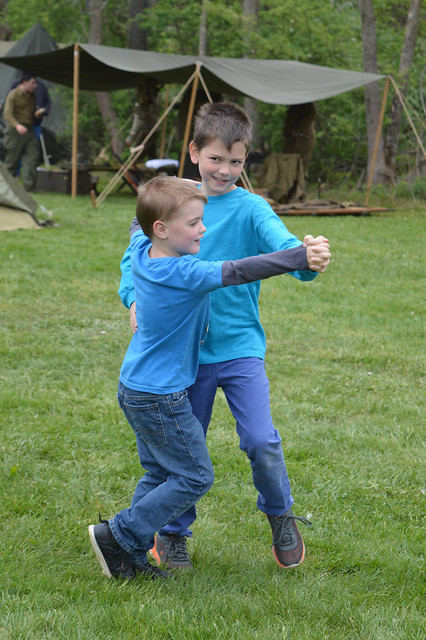 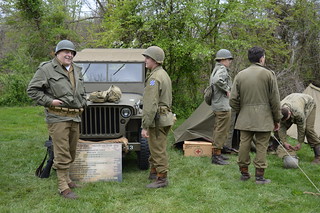 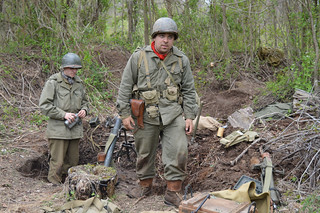 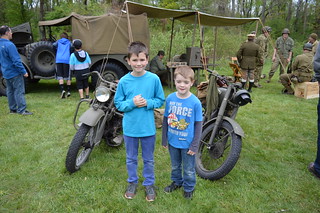 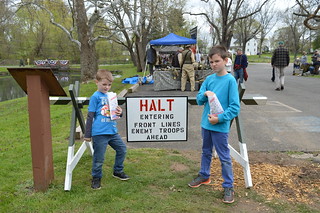 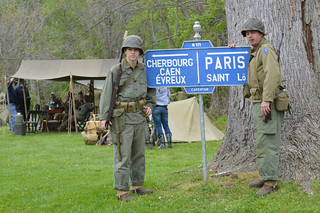 After all the formal activities, we let the boys spend some time climbing some large fallen trees.  They always love scrabbling around on trees and this one had some great long branches for them to balance on plus a little “cave” formed by its exposed root system.  We also found a Canadian Tiger Swallowtail.  I assume it was injured in some way as it did not fly off when we approached it and even allowed the kids to gently handle it.  We moved it to a more secluded spot so that it could hopefully recover and then fly off.  Then, on the walk back to the car, the kid and I encountered a few snakes.  Most slithered a speedy retreat but one large Eastern Gartersnake stayed on the spot which enabled us to get up close and study it.  It soon became apparent that it too had been injured, probably by a car, so I picked it up and moved it to a grassy spot, safely away from tires.  It thanked me with a farewell hiss. 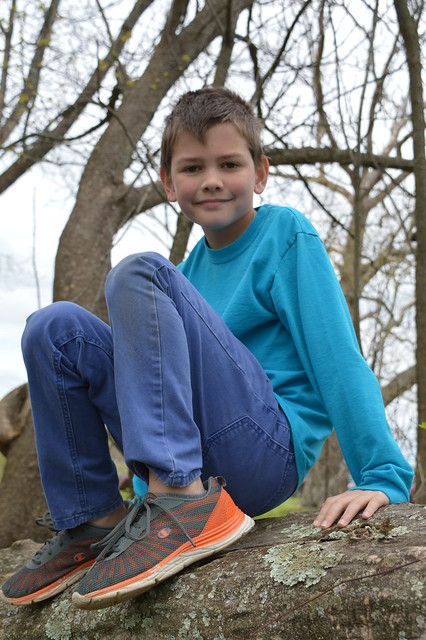 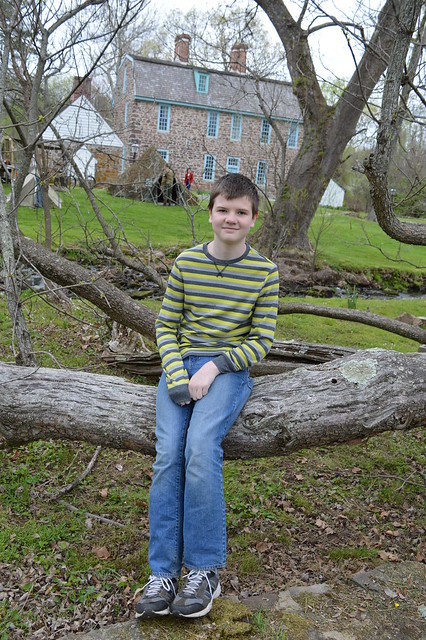 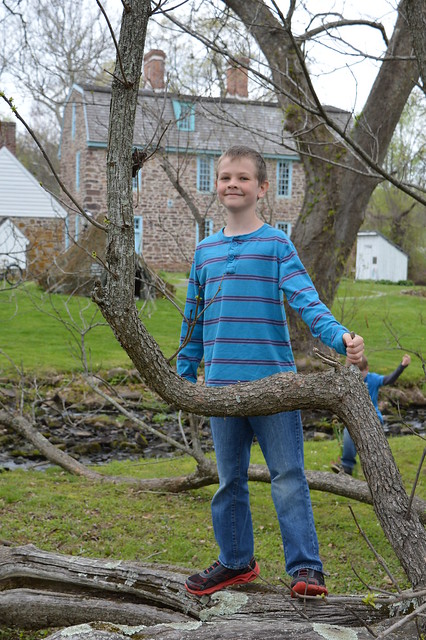 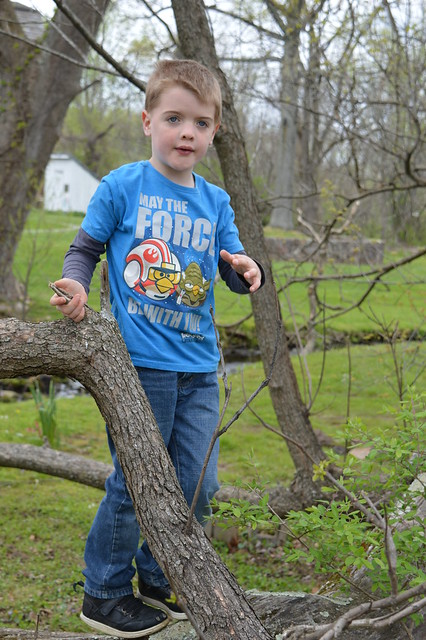 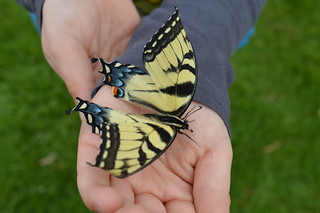 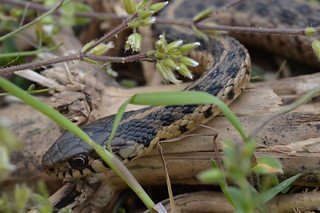 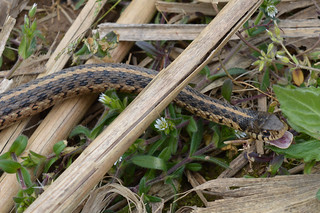