The theme for the tenth week of the Colour Me Positive art journal challenge was “beauty”.  The quotation provided was “Every piece of you is a burst of something beautiful”.  There were lots of directions I could have gone in based on that starting point.  However, a chat with my 8 year old led to the idea of a mermaid.

I have a checkered history when it comes to creating mermaid art works.  My most recent effort was a success but I suspect that was because she had no visible mermaid features.  I decided, therefore, to keep things simple with a monochrome illustration.  I did introduce an element of challenge, however, by deciding to use biro as my medium, drawing straight onto the page with no pencil guidelines with the exception of the exterior blob shape so as to keep the wave shapes in line.  With no ability to rectify mistakes (excluding Tipex) I was forced to slow down and draw more thoughtfully than I often do.  It was, therefore, pretty relaxing.

The drawing evolved on the page so that it eventually depicted a mermaid in the foreground, sunning herself flirtatiously on the rocks, a shipwrecked sailor looking cheerful as he believes the beautiful mermaid will rescue him, and a lighthouse because I like lighthouses and it suggests perilous waters.  Of course, we all know that mermaids like to drown sailors.  It’s dolphins that do the rescuing.  For that reason, I titled my illustration “Dangerous Beauty”. 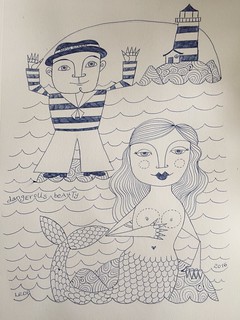