The prompt for the second week of Colour Me Positive was about being brave.  Given that I have decided that this year, in order to make progress in several areas of my life, I need to quit fearing failure and learn to take more risks, the theme chimed well with my goals for the year.  The quotation for this week was “She took the leap and built her wings on the way down”.  That too chimed with me because I am such an over-thinker, processing all the possibilities, and such a control freak that I find it difficult to make leaps.  Obviously I am capable of making some significant leaps (I emigrated across the Atlantic after all) but it is something I find really challenging.

It does not always happen when I read prompts, but I immediately had an idea for the art journal page.  The visual image that formed in my head was of Icarus tumbling through a golden sky.  Obviously Icarus’ story is one of failure, hubris and not following parental instructions.  However, I thought I could definitely make something out of a winged figure in a golden sky. The second, optional prompt was to use a silhouette.  I decided to silhouette the wings because it would save me time, not having to draw all those feather details.  The sun is gold paint.  It doesn’t photograph well as all the brush marks show but it is nicely metallic.  I finished the page by stamping the quotation. 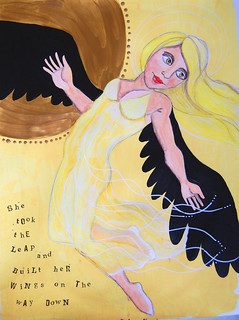 7 thoughts on “She Built her Wings on the Way Down”