Following our early afternoon jaunt to Washington Crossing, we did something that appealed far more to the boys – we headed into the city to soak up some of the festive atmosphere.  I must confess that I am rather short of seasonal sparkle this year.  I think November arrived quickly and caught me off guard and I have felt like I have been playing catch up ever since.  I have also been very distracted by other things that have required my focus so I have had little time to think about Christmas.  That is all on top of the fact that for me the holiday season brings with it additional chores, tasks and errands to be ploughed through.  I am not feeling all bah humbug about it but nor am I excited and enthused about Christmas yet.  I was hoping, therefore, that a trip into Philadelphia to see the market and the lights would start to sprinkle me with glitter.

Our first port of call was the Christmas Village.  I learned that Philly had a Christmas market by reading a blog article on Phoodie and the Beast but maybe all of my distractions have led me to overlook promotion for it.  Sited in Love Park, it is quite a bit smaller than the European markets it is clearly emulating but the compact nature probably suited us best as there is only so much perusing of wares my kids will tolerate.  Swirling around a central Christmas tree, the little wooden shacks were selling all sorts of things.  There were lots of stalls that would interest if one was seeking handcrafted jewellery.  There were also lots of stalls selling lovely Christmas ornaments.  I rather liked wooden Santas, carved in Russia and Ukraine, but they were very much out of my price range.  We also liked a stall bedecked in blown glass baubles but I resisted temptation as I have found that glass baubles and small boys do not mix.  The boys were captivated by a stall selling puppets.  I think had they had deeper pockets, they could have spent a lot of pocket money at that stall. 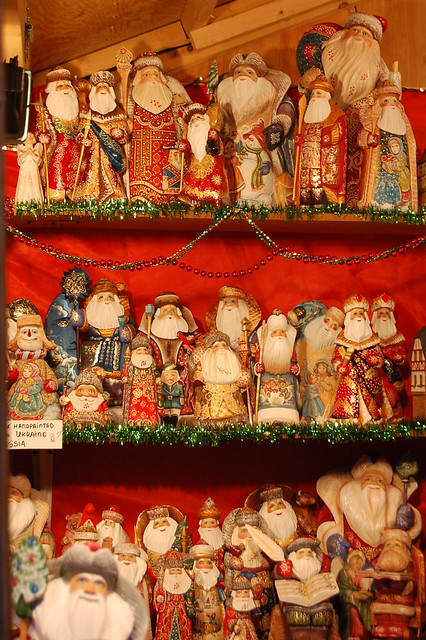 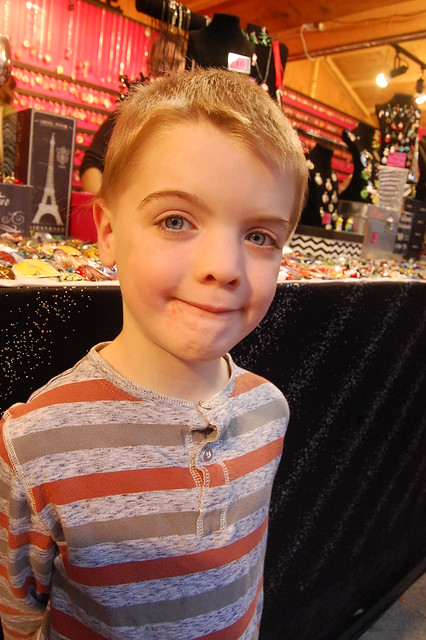 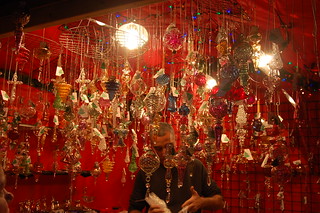 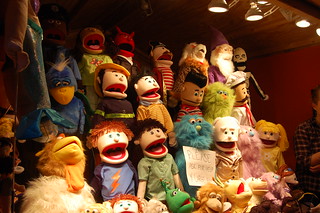 It has been a few years since I was last at a Christmas market – the last one being in Glasgow – and I rather liked the experience.  There was enough to see and do without it being a time consuming slog or another episode of “dragging whining kids somewhere against their will”.  The atmosphere was friendly and warm, with plenty of people milling around, lots of glistening lights, and the smells of delicious foods filling the area and making my stomach rumble despite the fact I was still stuffed full from a late lunch / early dinner.  While the compact nature of this Christmas village was helpful to us as parents, it did mean that all the people milling about were like sardines.  I don’t like crowds because I do not like physical contact with random people so that was another reason we did not malinger too long in the market.  We did stay long enough to let the boys pick out two little Germanic houses that emit a charming glow when a candle is placed inside. 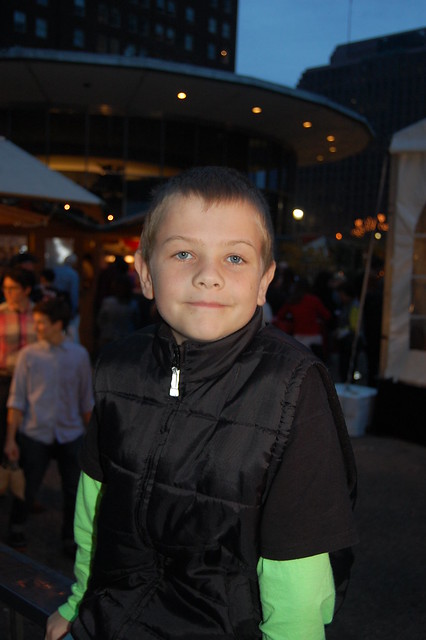 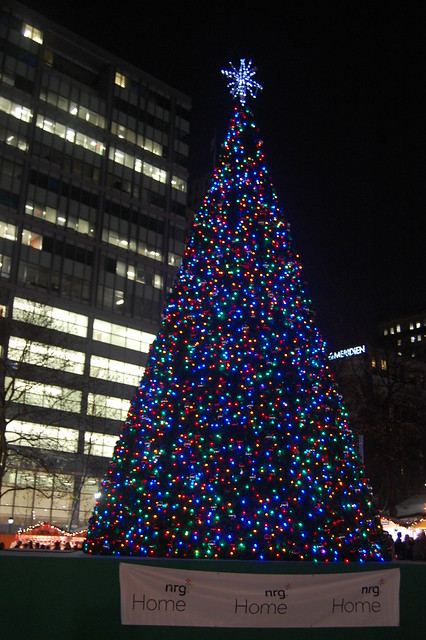 After the visit to the Christmas market, a hop, skip and a jump brought us to the Comcast Centre where – at the top of each hour – a “Holiday Spectacular” is broadcast on their gigantic screens in the entrance foyer.  We arrived with ten minutes to spare which was just as well as it fairly filled up after our arrival and the kids would not have gotten such a good view.  The show is broadcast on the vast LED screens in amazing high definition.  I am no technology junkie.  My husband might marvel at developments in TVs and such like but it is all lost on me.  However, as one might anticipate from a telecoms giant, the technology was incredible.  The figures on the screen looked entirely three dimensional.  There were snowy scenes, penguins, the Twelve Days of Christmas, The Nutcracker, giant piano keys, Dickensian London, and aerial scenes of central Philly.  It lasted about 15 minutes and my kids were spellbound throughout.  Nobody moaned about standing or about being hemmed in by other people.  That there is a Christmas miracle.  The whole presentation was very polished and actually quite enchanting. 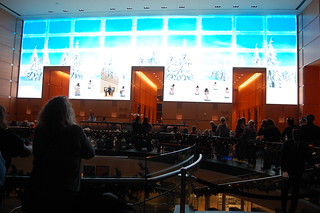 Darkness had fallen completely while we were in the Comcast Centre but the air was still warm.  We are experiencing unseasonably warm temperatures in PA this December and are apparently on track for a record warm Christmas Day.  T-shirt weather in December!  The kids were loving it so we let them run around outside the building where there were spotlit trees and twinkly lights in branches to entertain them.  I disrupted their play to try and get a festive photo of all four of them together.  That did not go down well. 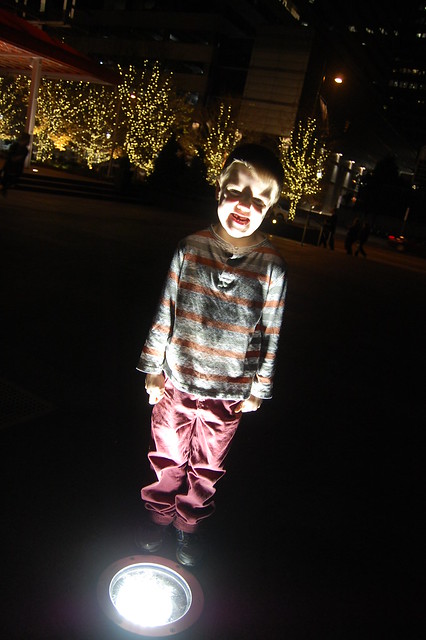 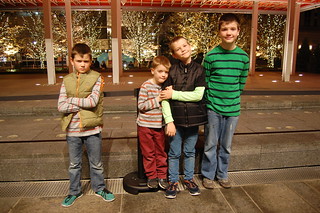 Next stop was Macy’s where I had heard there was a holiday light show at the top of each hour.  We made it on time by the skin of our teeth but finding a position on the shop floor that afforded us decent views was impossible.  The kids lost interest within minutes.  It was also uncomfortably hot because of the combined body heat of all those people crammed together indoors.  Frankly, the light show was also rather lacklustre compared to the broadcast we had just seen.  We, therefore, left after a few short minutes.  The kids were far more taken with the Macy’s window displays out on the street, a few of which were on a Peanuts theme. 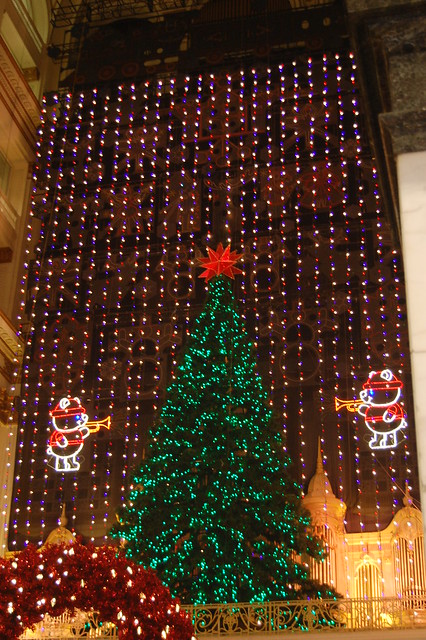 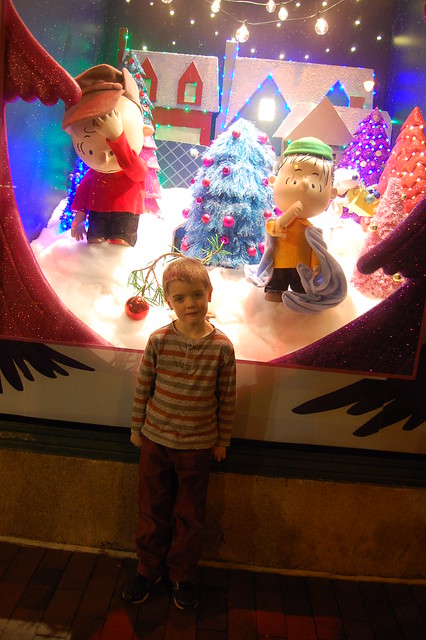 We had not intended another stop off on our trip into Philly.  However, as we strolled past the Municipal Buildings Plaza, my kids were overtaken with a fit of nostalgia.  They had spent a lot of time playing in this plaza during our first ever trip into Philadelphia.  Their rosy glow was ironic given that that particular trip was a horrendous fail.  My husband having to take a lengthy work phone call combined with the kids pitching fits at every opportunity made it an incredibly stressful trip.  Apparently, however, they had fostered fond memories for this place.  The plaza is the location of a collection of sculptures depicting gigantic gaming pieces, dominoes, Monopoly markers.  A group of teenagers were using it as a skateboarding park but they were soon pushed to the edges by my mob who were excitedly running and climbing and leaping all over the place.  It was a fun conclusion to a fun evening.  I might even have felt the first twinkles of festive spirit stirring in my soul. 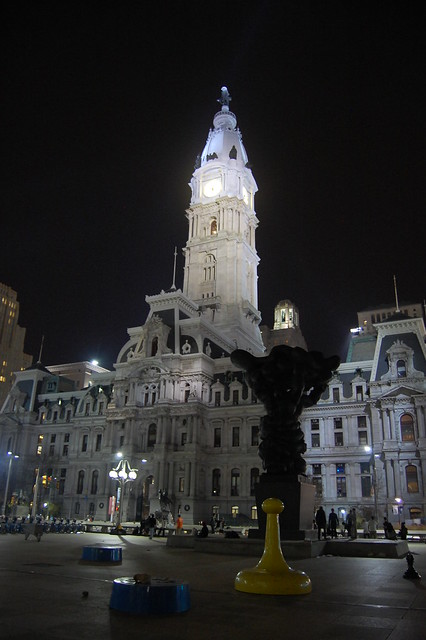 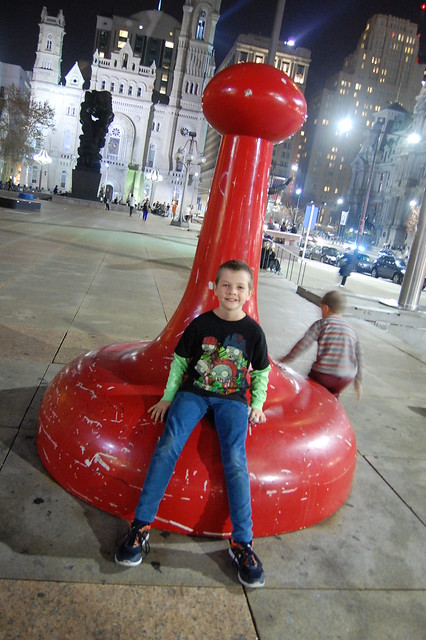 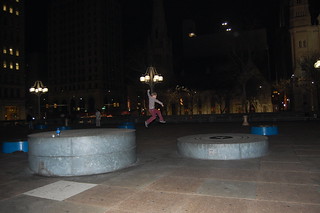 10 thoughts on “Christmas in the City”