My sons all receive monthly or every-other-monthly geeky subscription crates.  They love getting parcels in the post, love the surprise of the contents, and love to indulge in collecting geeky items.  A few months ago, my oldest son received a blank vinyl “munny” figure in his Loot Crate.  The idea of these blanks is that people can customise them.  There are some absolutely fantastic creations out there.  I know because I had not a clue about these things so I had to conduct a google.  There are some most impressive, talented people out there.  My oldest had a vague idea about what sort of design he wanted to create on the munny but was too intimidated by the thought of errors to make a start.  He, therefore, “commissioned” me to do it for him.  I have never worked with a vinyl surface before so that was a challenge.  I read about all the possible media I could use to design the munny but most involved all sorts of primers and other things I don’t own in my stockpile of art materials.  Good old Sharpies were a possibility though so my son and I decided that we would keep it simple and just work with those markers.  The Sharpies worked like a charm but it was tricky working on such a contoured surface.

So here, without further preamble, is the result of my first ever creating on a vinyl figure.  My sons love my zombie drawings with all their lines and doodles so that type of mark making and style was the brief.  Initially we were going to work with a colour in addition to black but, once I had the black pen work done, we decided to keep it monochromatic.  I am not convinced I will repeat this type of project any time soon but it was quite fun. 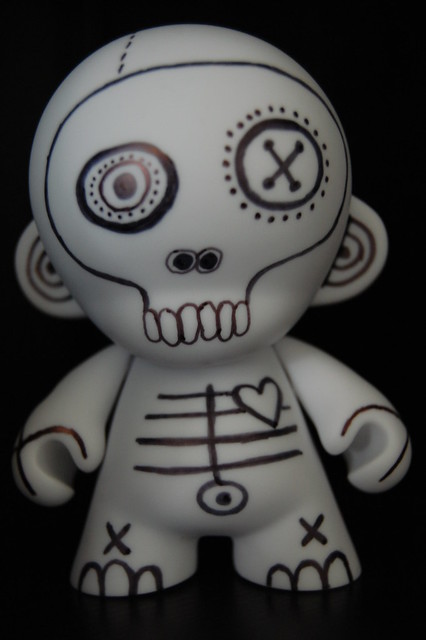 15 thoughts on “Decorating a Munny”