My husband surprised me on my 40th birthday by announcing that his gift to me was a vacation in Yucatan, Mexico.  I was shocked into stupification.  As the Pict family’s resident control freak, I am the one who plans all of our vacations and here I was going on a trip having had no hand in planning it, no clue it was even happening.  It honestly took me quite some time to absorb the fact that this was really happening.  My in-laws, freshly arrived from England, were going to be looking after our four boys while we were away.  Therefore, the vacation presented us with a welcome opportunity to spend quality time together as a couple rather than as parents and to decompress, relax, have fun, and explore.  Furthermore, I had never been to Mexico before so I was getting to add a new country to my list.

We flew out from Philly very early in the morning.  Despite not being able to do online check-in because of my status as a Permanent Resident, we were able to check in quickly and everything else went smoothly too.  In fact, the only drawbacks to the flight were that the man behind us was earthquake level snoring throughout and someone was producing noxious methane from their nether regions.  We didn’t even have to share our seating row with a random since the aeroplane was half empty.  The early start meant that we arrived in Cancun in the afternoon, effectively gaining an additional day of vacation, especially since our suitcase was waiting for us in baggage claim.

Our first stop was to take a shuttle bus out to the rental car area to pick up our car for the week.  Car rental in Mexico is incredibly cheap, a complete bargain, and it gave us the freedom to get out and explore without having to conform to any sort of schedule or have any spontaneity inhibited.  The car we were allocated was a Dodge Attitude and it more than earned its name.  The car really had a bad attitude: it did the vehicular equivalent of having an asthma attack every time it accelerated and it had less oomph than a tortoise hauling an HGV by a rope grasped in its maw.  Still, it got us from A to B reliably and was easy to park up even in tight spaces so we had no real complaints with its performance.  It even managed to handle all of the topes. Topes are speed bumps (sleeping policemen to we Brits) and they appear not just in residential areas and town centres but also on main roads.  They are not often visually obvious as part of the road surface and some of them are quite steep.  One has to be vigilant, therefore, in looking for the road signs indicating that there are topes around and it is also necessary to approach them at little over a crawl, which can be quite tricky when driving on a faster main road: Mr Pict missed spotting one was ahead and went over it too fast and almost had a Dukes of Hazzard moment.

In no time at all we were checking into our hotel, the Marriot owned CasaMagna.  It was a lovely hotel, much more luxurious than anywhere I have stayed before.  Mr Pict and I normally treat hotels and motels as somewhere to lay our weary bones after a day of travelling but he chose the CasaMagna on the basis that he wanted us to have some time just chilling out around the hotel.  He chose wisely as the hotel was superb not just in terms of the fixtures and fittings and the resources but also in terms of the friendly staff who got every detail spot on.  Someone even came in each evening to turn our bed linen down for us.  We were treated wonderfully throughout our stay.  Our room was on the top floor with a great sea view from the balcony, a sofa area, a squishy king size bed, and a swish bathroom. 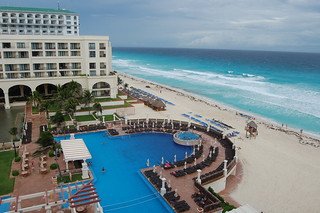 We quickly unpacked our suitcase and then headed down through the hotel’s open air corridors and out onto the beach.  It was lovely to walk along a beach in mid-November and feel toasty warm.  It was also wonderful to walk along a beach and not have to keep my eyes skimming and scanning for four children.  Our youngest son got lost on a beach for 15 minutes a few years ago – and 15 minutes felt like so much longer – so I have not been able to truly relax on a beach with the kids since.  Kid-free, I could actually just enjoy the warm air, the sea breeze, and the turquoise water lapping around my feet.  I loathe sand generally – the only good sand being glass – but must admit that as far as sand goes that beach was pretty tip top.  We then parked ourselves on a pair of sun loungers to do some people watching, including a bloke who was kite surfing quite dramatically. 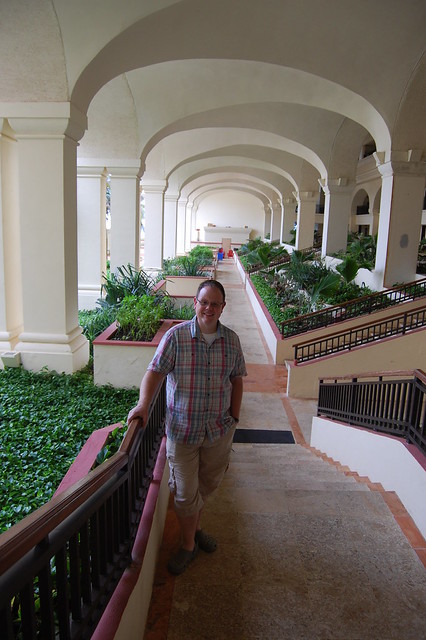 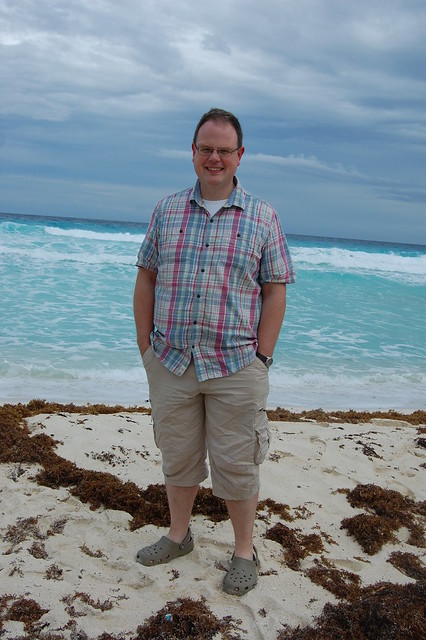 After giving ourselves a quick spit and polish after getting a tad soggy on the shore, we headed out to dinner.  We chose a restaurant called La Habichuela Sunset further up the beach strip in Cancun.  It not only had a good write up in guides we had read but also served both traditional Yucatecan and prehispanic Mayan dishes.  The restaurant looked totally unassuming from the exterior but it definitely had the wow factor inside.  A staircase with a balustrade carved as snakes with open, sharp-toothed mouths ended on a last step landing on a glass floor showing some ancient stone steps beneath.  Though I knew it was safe to stand on, I found myself edging around it until I could get my feet back on the solid floor.  I felt a bit silly until I noticed almost all of the other diners also avoided placing both feet on the glass.  There were replica Mayan carvings and statues around the walls, with colour changing lights poised on them, fancy light fittings, and we were seated at table next to glass wall overlooking a pretty garden dining area with stone columns echoing Mayan ruins.

We had a pair of great waiters named Juan and Miguel whose service was faultless throughout.  The food was spectacular too, a whole explosion of flavours, tangs and textures.  I had chicken lime soup to start and Mr Pict had a deliciously creamy but chunky guacamole served with a piquant salsa and crunchy tortilla chips.  My entree was a Mayan dish called Chicken Pibil, which is seasoned with achiote and then cooked inside a wrapping of banana leaves.  It was scrumptious.  Mr Pict had Chicken Mole and declared the sauce of peppers and chocolate to be richly delicious.   Dessert was a light and flavourful coconut cake for me and a parfait within Kahlua for Mr Pict.  We both had margaritas and perhaps the context helped but I think it might just be the best margarita I’ve ever had. 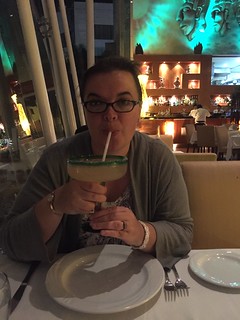 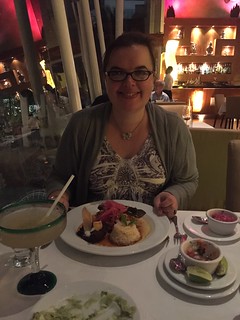 Completely stuffed, we decided to have a drive around the area to get a glimpse of the nightlife.  There were lots of brash hotels and clubs but also strips of derelict buildings.  There was certainly nothing that compelled us to park the car and get out for a wander.  We headed back to the hotel to read on our balcony and relax ahead of a big trip the next day.