My kids were over the moon when I announced that Roy Lichtenstein was the next artist we were studying in our History of Art project.  My oldest reads a lot of graphic novels and my younger three are comic book aficionados so the aesthetic of Lichtenstein’s art really appeals to them.  I introduced them to the concept of Pop Art and its use of popular mass culture and everyday objects as inspiration for art work.  Their familiarity with comic books meant that the boys found it easy to identify the elements that Lichtenstein used in his art work: strong black lines, primary colours, Ben Day dots, speech bubbles and onomatopoeia.

The boys all unanimously decided to use sharpies as their medium for their Lichtenstein inspired drawings.  My oldest continued with his penguin theme and drew a ninja penguin and his narwhal sidekick.  I think he did a great job with the composition. 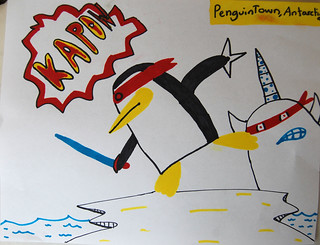 My youngest drew a whole comic strip.  He can be a wee perfectionist and gets frustrated if a line or shape is not exactly as he intended.  He uses the eraser a great deal.  I was curious, therefore, about how he would handle drawing directly onto the paper with sharpie.  I was predicting some sort of flap and maybe a few scrumpled first drafts.  However, he worked diligently and precisely and with no eruptions.  I have no idea what the story is about. 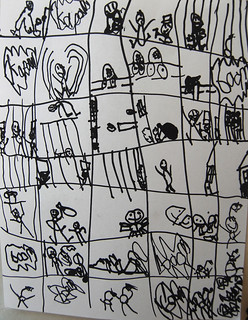 My middle two sons are obsessed with Marvel and DC comics and characters so I knew that was what they would opt for in terms of subject matter.  My 8 year old loves Robin so that was what he plumped for.  He is also obsessed with pugs so his Robin has a super-pug sidekick.  I think his drawing has a lot of personality. 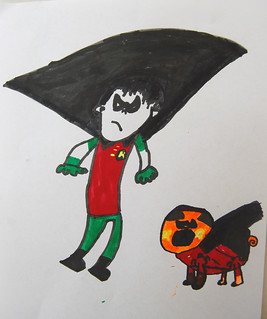 My 10 year old opted for Batman and a showdown between him and Penguin.  I like his sparing use of colour and I think he has a strong sense of composition. 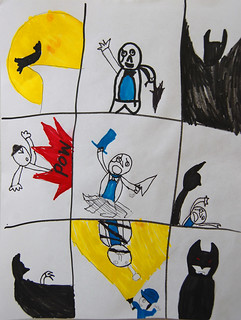 I drew a face in my art journal and used the black lines and bold colours in order to emulate Lichtenstein.  I didn’t want to go dot crazy so I just used a few in certain places and I then added the “Kapow” in one corner even though in the context of the drawing it makes absolutely no sense. 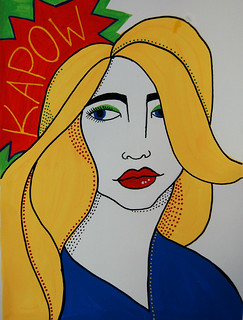 You can see my Lichtenstein Dotty Bunny over on my art blog.