Under the Child Citizenship Act, our four sons- as the children of a US citizen and permanently residing in America – became US citizens when we emigrated here in October 2013.  However, in order to make that officially part of the record and make it concrete and provable, we had the option of either applying for a Certificate of Citizenship or a US passport.  We thought the passports were a better option so that was what we decided to do.

We filled in the forms and took them to the Post Office for checking and processing.  Just as in Britain, there is a fee attached for this service but it is a more sound and secure way to submit a passport application so is well worth the money.  We could not, however, get the Post Office person handling the paperworks to appreciate that the applications were being submitted under the Child Citizenship Act rather than by standard birth-right.  We talked it through with him several times and he got the idea on some level but not that there was a requirement for additional supporting evidence regarding the boys’ residency qualification.  Finally my husband insisted that he enclose at least copies of their Green Cards and other such documentation with the applications.

We were not surprised, therefore, when a month later four identical envelopes appeared in my mail box all bearing the same message from the US Department of State: we needed to submit a whole bundle of supporting evidence within 90 days or else all four applications would be void.  This was so supremely frustrating that it made me want to primal scream.  It was also far too reminiscent of the beauracratic tangles and annoyance of the Green Card saga.  A phone call to the relevant section of the State Department confirmed how to handle having only one original copy of our Marriage Certificate to split between four applications and that we only had to send all the boys’ Green Cards to evidence the residency qualification.  All of which could have been done at the Post Office.  We essentially paid the PO’s handling fee just so they would get the applications from A to B and nothing more.

Thankfully – unlike the debacle with my oldest son’s Social Security card and Green Card – this was the only glitch in the bureaucratic path and a few days ago four envelopes appeared in the mailbox, each containing a US passport.  Of course, there is still an opportunity for a stuff up as there always is – they have not yet returned our marriage certificate or the Green Cards – but for now it looks like the passport saga is at an end.  Our sons are now, after two years of living here, officially dual nationals and will be legally recognised as American citizens.  I am now the only Pict family member who remains un-American.  This Presidential election, however, increases my frustration at not being permitted to vote so I may have to make my own citizenship my next big bureaucratic project. 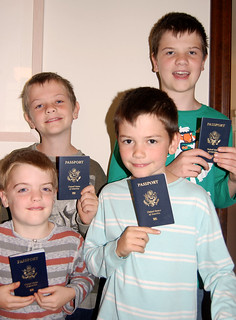