Concluding the theme of depicting people in art journal pages, the prompt for the Documented Life Project this week was self-portraiture.  Eegads!  I am not beyond drawing myself.  It is useful practice when no other human subject is around or willing to sit still but my own fizzog does not really inspire me.  Ugh.

I decided to challenge myself to produce a self-portrait in no more than five minutes.  Partly this was because I had five minutes of free time while something was cooking on the hob, partly it was so I would not have the opportunity to over-think what I was doing, and partly it was because I could then blame any inadequacies on the pressure of time.  I switched on my iPhone camera in selfie mode and held it in one hand while quickly drawing with Inktense pencils in the other.  In the final minute, I then brushed water over the marks I had laid down to turn the pencil into ink and splattered some pigment across the page for the merry heck of it.  The results at the conclusion of that five minutes of frenetic activity were …. not good.  Not good at all.  The drawing looked nothing like me and was truly mediocre as a drawing.  At best it was bland and boring … and lopsided.  I almost decided not to share it on the blog but “red in tooth and claw” here it is. 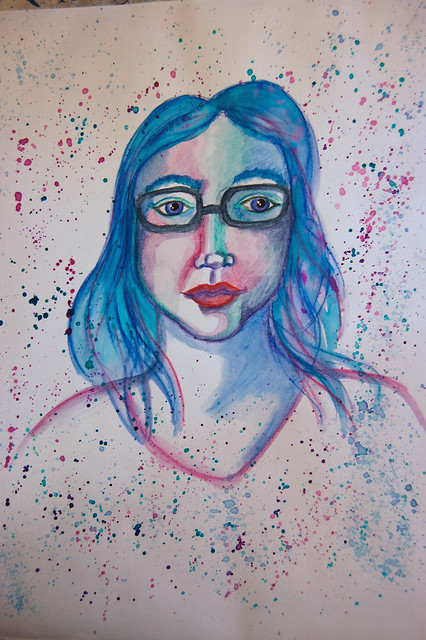 So I obviously had to have another stab at it.  I again gave myself five minutes but this time I used India Ink over a substrate of paint smeared underpaper.  The underpaper immediately provided visual interest and helped me overcome the mental block of the blank page.  I am pretty comfortable working with ink and wash so I just drew directly on to the paper in ink with no pencil marks as scaffolding.  This time I also worked from a photo on my camera rather than holding the phone up.  Much better idea.  It’s still not a great self-portrait but goodness it is so much better than my first attempt.  I have used underpaper as a collage element before but never drawn onto it before.  I like the effect and it is interesting to see that some of the paint marks repelled the ink which makes for more interesting layering.  That I will definitely try again.  Self-portraits can go back to being for desperate measures practice. 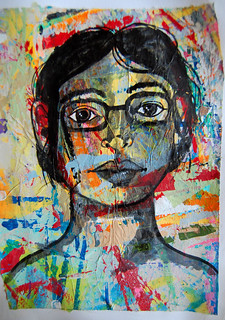 2 thoughts on “A Brace of Self-Portraits”