I was really pleased to reach Seurat in our History of Art project because his approach to art work is so different from what we had studied before and I thought it would be refreshing for the kids to see how possible it is to reinvent within the art world.  We looked at Seurat’s paintings, especially Bathers at Asnieres and A Sunday Afternoon on the Island of La Grande Jatte, both as whole paintings and as details so that they could better appreciate the way in which Seurat had constructed the images.  We discussed his use of chromoluminarism and pointillism to build up colours and shades, getting the eye of the viewer to do the blending instead of blending on the palette or the paper.  The boys were very impressed with the cleverness of it all.

I have to tell you that I absolutely loved teaching my kids about Seurat because they were so enthused about his very different style and because I actually got them all to use paint.  They have been so resistant to the use of paint – especially my 9 year old – but for this lesson they all used paint.  100% success rate.  Everyone worked small – including me – so as not to have everyone run out of patience with creating dots.

My 9 year old chose to create a rainbow within a circular shape so that he could explore the idea of overlapping colours to create shades or to blend areas.  We both agreed it was reminiscent of the eye tests ophthalmologists do to detect colour blindness. 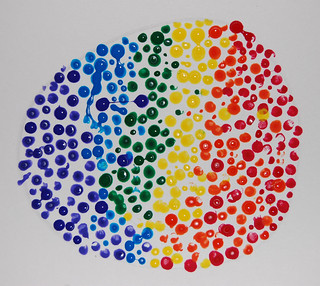 My 6 year old chose to work in shades of grey to depict an olive spoon we own.  He became frustrated at one point as his dots were in such close proximity that they had formed a solid shape of paint on the handle but I suggested he use another shade to dot on top of that area once that first layer was dry and that satisfied him. 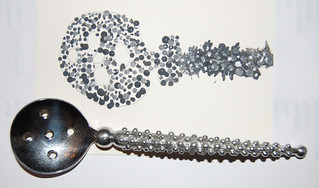 Having created a penguin for his aboriginal dot painting, my 12 year old decided this study in dots should be Minecraft.  He couldn’t possibly do something other than Minecraft and penguins, of course.  His painting, therefore, is of a Creeper. 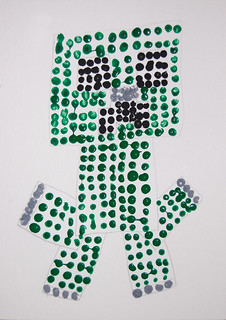 We learned this week that my parents’ elderly chihuahua had died.  My kids were all very sad but my dog mad 8 year old was particularly devastated.  He, therefore, decided his pointillist painting would be a portrait of the chihuahua in tribute to her memory. 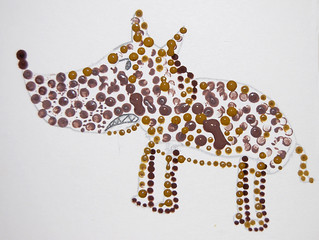 I undertook a still life study of a stainless steel teapot and milk jug – though I turned the jug into a mug – and tried to use the dots to replicate the actual values of light and shade reflected in the surface of the objects.  I am not sure I quite achieved that but I am pretty happy with the outcome regardless.  My intention had been to create a background for the still life objects but I ran out of patience with the dots.  I never thought I would say it – because I love using dots so much in my art work – but I was all dotted out.  Especially working on the scale he did and with the degree of precision he did, Seurat clearly had a greater well of zen than I possess. 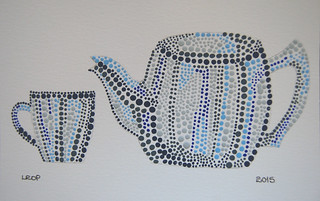 Head on over to my other blog if you would like to see my Seurat inspired Crazy Critter.