This week’s Life Book lesson was taken by Alena Hennessy who had been the tutor for the lesson on quick, intuitive painting.  It was another lesson in working intuitively and this time our inspiration was to be our Muse or a depiction of a Goddess whose characteristics or qualities seemed to speak to us.

I had no idea which goddess to choose for my piece.  I asked my children and they all unanimously voted for Athena.  I was going to go with their suggestion but I had drawn Athena last year as part of my 40 Drawings in 40 Drawings challenge on Greek Mythology.  As such, I was worried I would get locked into creating another version of that drawing which would undermine me working intuitively.  My 9 year old son is pretty obsessed with mythology generally so I asked him to pick another goddess, one from a tradition other than the Greco-Roman.  His next favourite mythology is Egyptian so he plumped for the goddess Hathor.  According to her Wikipedia page, Hathor is the goddess associated with joy, feminine love and motherhood.  I can relate to those concepts so Hathor it was.

If you have read enough of my blog posts about my art then you will know that intuitive painting and I do not get along very well.  I am an uber control freak and find it very challenging to work without having a clear plan or intended outcome.  I am getting better at going with the flow but I do still tend to get inside my head rather than working instinctively.  My response to this lesson did not demonstrate any progress in my battle with this issue.

I managed to create the background intuitively but only because dripping and splattering is my Go To method when I have no clear idea in mind.  Plus I love dripping and spattering.  I then also managed to resist the temptation to sketch the figure out in pencil and instead just got busy painting.  Then, however, I got too controlling again and put way too much thought into the facial features and details.  The painting, therefore, ended up being pretty rigid, not organic enough.

I do wonder if I am every going to accomplish working completely intuitively or if I need to just accept that that style and me don’t get along. 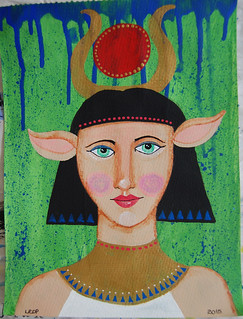 7 thoughts on “The Goddess Hathor”