Sticking with the Renaissance, after Botticelli we moved on to Leonardo Da Vinci.  Da Vinci was, of course, an incredible polymath, a true genius, and the kids were bowled over by the long list of his accomplishments and abilities.  If I could somehow inspire in my kids even a fraction of Da Vinci’s passion for learning, his enthusiasm for accruing new knowledge, then I would consider my job as a parent well done.  Time will tell but right now only one of them has even picked up their Summer math packet.

Anyway, as tempting as it might have been to set up an anatomy lesson for the kids, I chose to focus the lesson on Da Vinci’s work in two-dimensional art and his inventing.  We, therefore, looked at some of this paintings and sketches and we discussed our views on why the Mona Lisa is such an iconic painting and whether it deserves to even be considered Da Vinci’s best work.  Lunch time discussions are rarely dull in our house.

My 9 year old decided to go down the invention route.  He was quite taken with the idea that Da Vinci was able to not only conjure up visions of machines and objects in his mind’s eye but could then plan and engineer them.  Of course, Leonardo would have taken much more time and care over his drawing and been much more precise with his line work and handwriting but Leonardo did not have a PS3 game he had just borrowed from the library.  The invention is a chocolate cutter.  My 9 year old acknowledged that it actually solved no problems and was not a remotely necessary invention.  Willy Wonka meets Da Vinci. 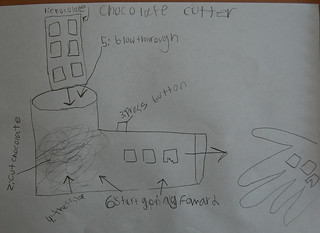 My 8 year old was inspired by Da Vinci’s sketchbooks and decided to make some detailed studies of objects he had to hand which were, of course, art tools: a pencil, a paintbrush, an eraser and a pencil sharpener. 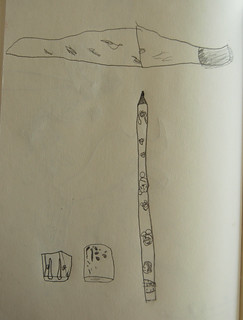 The rest of us decided to work on the Mona Lisa.  We used a print out of her face and hands that I found online and then did whatever we wanted with it.

In the case of my 12 year old, he decided to relocate Mona Lisa from Renaissance Italy to the South Pole and surround her with penguins and a narwhal. 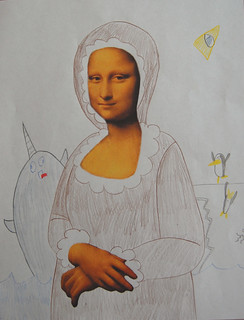 My 6 year old is still loving exploring watercolours so he created a brightly coloured background and glued Mona Lisa’s face and hands onto the background.  It appears he gave her some facial tattoos too. 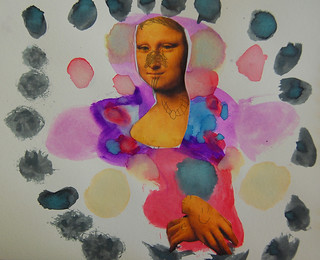 Working in my art journal, I created a collage out of magazine pages and postage stamps and then adhered Mona Lisa’s hands and face.  Using a technique learned from the Life Book lesson I did taken by Jane Davenport, I then used gesso to paint in the negative space and thus carve out a figure on the collaged page. 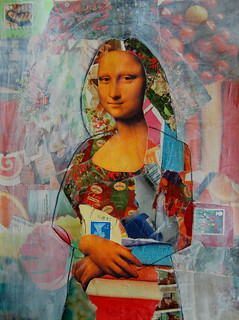 Want to see my Crazy Critter inspired by Leonardo Da Vinci?  Click here to be transported to my other blog.