It was a relief to find that the majority of the Life Book lessons I had missed were bonus lessons which meant they were instantly accessible, minimum fuss and make efficient use of time.  One such lesson was delivered by Rachael Rice – who had delivered an earlier LB lesson on feathers – and was about creating a hamsa hand symbol using watercolour as the medium.

I am not from a culture or faith group that utilises hamsa hand symbols so I did not feel much of a connection to the idea of creating a spiritual symbol that has actual meaning to those who do form part of those cultures or faiths.  However, I did engage with the idea of creating art revolving around a hand symbol.  It was, after all, one of the first forms of artistic expression that early humans opted for: hand prints on the cave wall.

I painted the whole thing with watercolour and then used paint pen to draw stylised branches and blossoms along the fingers, the palm of the hand becoming a trunk.  I quite like the way it turned out, specifically the bleeding together of the colours and the branch patterns. 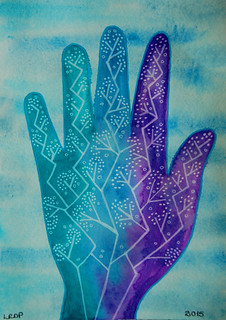