Saturday was Free Comic Book Day, an annual event we were introduced to last year.  Knowing what was in store for them this year, the boys bounded out of bed.  The middle two even dressed themselves appropriately, one in an Avengers t-shirt and one in his homemade Star-Lord t-shirt.  Despite neither parent having an interest in comic books or superheroes, my three younger sons are obsessed with that whole culture.  Our 9 year old in particular is a walking, talking encyclopaedia of Marvel and DC knowledge.  He can talk ad nauseam on any character one dares to mention.  It may not intersect with our interests but Mr Pict and I are always happy to promote geekdom in our children so we support their comic book obsessions.

When we arrived at our local comic book store we found that the car park was jam packed and we grabbed the last vacant spot in the adjacent car park.  Last year, the tables with the free comic books had been set up inside the store but this year they had set them up beneath a marquee outside the store.  Although we arrived just after opening time, a lengthy queue had already formed.  The queue was moving swiftly and the event  was well organised, however, so it did not take long for the kids to reach the head of the queue and start selecting their three free comic books each.  Just as last year, there was a large and diverse collection to choose from so they had no difficulty picking out three each without there being any crossover.

Having done the free bit, the kids then went into the comic book store to peruse their wares.  I thought I had seen the place at its most busy during the same event last year but it was even more jam-packed this time.  It was great to see so many people milling around from the young to the old, many in costume or at least themed t-shirts.  The staff gave my 9 year old props for designing his own Star-Lord t-shirt which had him puffed up like a wee peacock.  The three younger boys all follow a comic book series so they picked out the latest editions of each from the shelves.  My oldest meanwhile is a collector of Funko Pops so he looked at the massive stack of Pops available in the store.  In the end, the only way to compel the kids to leave the shop was to remind them that we had pre-booked cinema tickets and had to go. 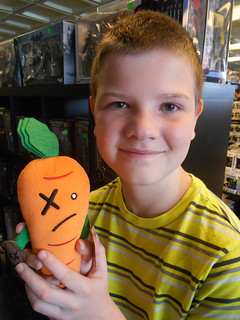 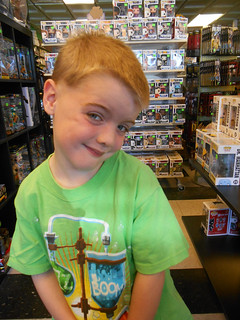 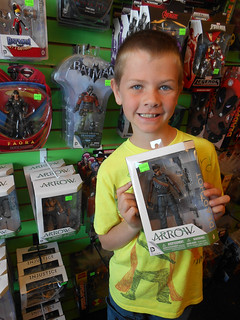 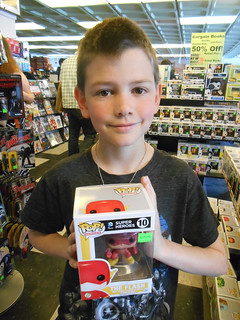 The cinema trip was a continuation of our geeky day as we were off to see ‘Avengers: Age of Ultron’.  To say my kids and husband had high expectations of this movie is a terrible understatement.  Sequels can often disappoint. ‘The Empire Strikes Back’, ‘Godfather II’ and ‘Toy Story 2’ are rare exceptions.  In my humble opinion, ‘Ultron’ did not surpass the fun and spectacle of ‘Avengers Assemble’ but nor was it a case of “diminishing returns”.  Some characters (Hawkeye in particular) were fleshed out more in this movie, promoted from being elevated sidekicks, while others (such as Thor) were pushed to the peripheries.  The character relationships were developed further and all the individuals were shown to be working effectively as a team.  However, at the same time the movie seemed to be about fractures and splinters appearing in the group which made it a bit less rip-roaring fun.  There were stupendous action set pieces and the baddie – pretty much a personification of the internet gone bad – was effective.  There was a flabby section, however, where my eyes began to droop and I wasn’t that engaged with all the new characters.  But the cinema trip was not about me and the important thing is that my kids were on the edge of their seats throughout, loving every moment of it and lapping up all the comic book geekdom.  My 8 year old was sitting next to me and kept leaning over to whisper to  facts to me or his predictions for the movie.  He was disappointed but forgiving when one of his predictions failed to materialise.

Then we went home to cook and eat a barbecue in the sunshine.  My youngest boys decided that they should make “mocktails” for me.  They pillaged the fridge for fruit juice and fresh berries and the cupboards for candy and lollipops and constructed several drinks for me to sample.  They even made little decorations for each glass.  It was sweet, cute and thoughtful of them – even though they used up gallons of juice and punnets of fruit.  I am going to have to stock my 1970s cocktail cabinet with actual liquor so that they can learn to make me actual cocktails. 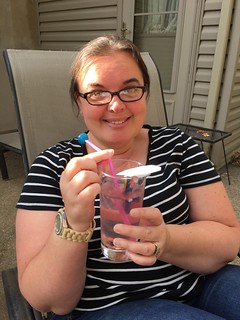 6 thoughts on “Our Geek-End”