Spring has definitely – finally! – arrived in Pennsylvania so it seemed appropriate to go to a botanical garden for our weekend outing.  We opted for Tyler Arboretum, which is in Media, to the west of Philadelphia.  We thought our children would enjoy exploring the 650 acres of the arboretum, running around, lots to explore, fresh air and space.  It should have been heaps of fun and a great family day trip out.  Quality family time.

My kids are feral and are used to wilderness.  If Bagheera had taken my kids to be fostered by the wolves, the wolves would have refused to take them on for being too wild.  They want to roam free, unfettered, climb trees, make dens among the roots and branches of trees, have battles with sticks …. so it all went wrong when my husband told them that tree climbing was not permitted.  Instant grumps set in.  Huffiness and scowling replaced smiles and giggles.  Only our five year old remained untouched by the curse that had been cast over our children, turning them into hobgoblins.  The other three tag-teamed us, taking turns at being sunshine and lollipops before returning to grouching, grunting and barking.  50% of our children were rotters for 100% of the time.  It was like having three Eeyores and a Roo going for a trek through the Hundred Acre Wood.

My photos won’t show my sons in snarling mode, of course, because I am not much inclined to take photos when my children are being horrors and because sharing would be unkind.  However, in the spirit of “keeping it real” with posting on my blog about parenting, family outings are not always tickety-boo fun and frolics.

Anyway, getting back to the Arboretum …..

The cherry blossoms were in bloom which made everyone happy when we arrived.  The kids danced around among the blossoms as it blew off the trees.  The magnolias were also in full bloom and their incredible aroma filled the air.  The boys spent quite some time among the magnolia trees.  I love magnolias so I was happy too.  I should have banked that happiness because it was after we left the magnolias that it all started to go wrong with the kids taking turns to be orcs. 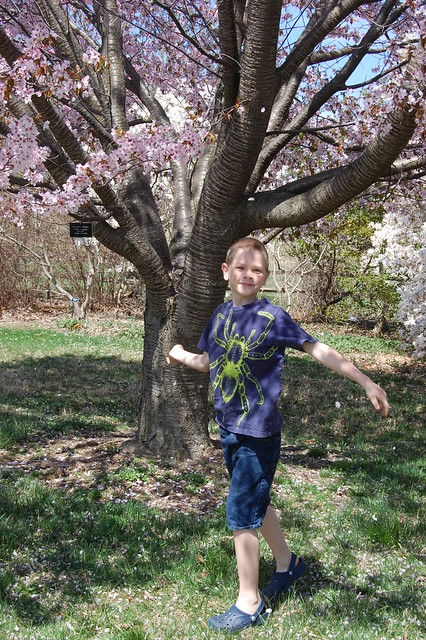 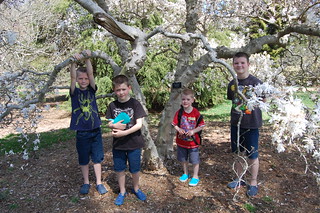 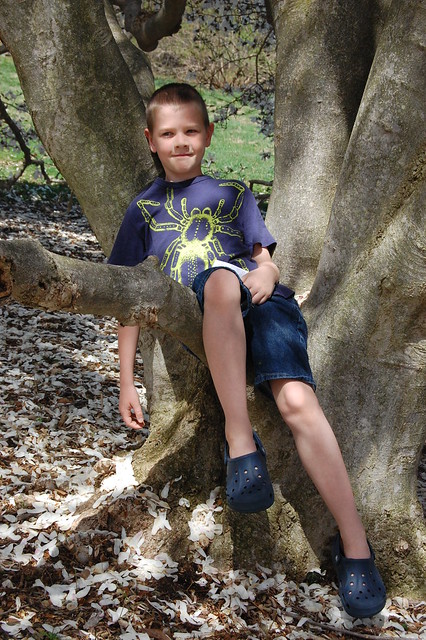 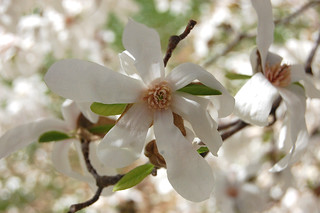 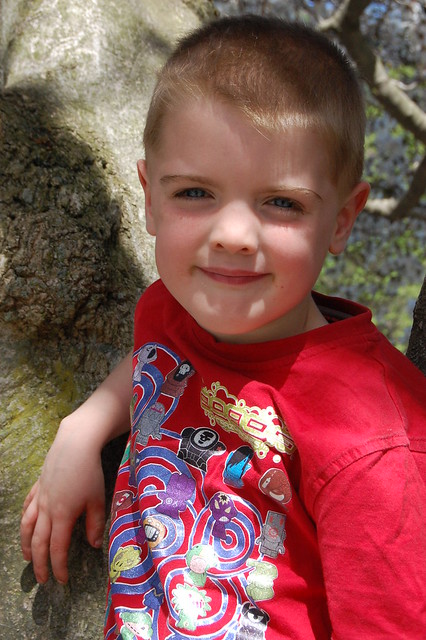 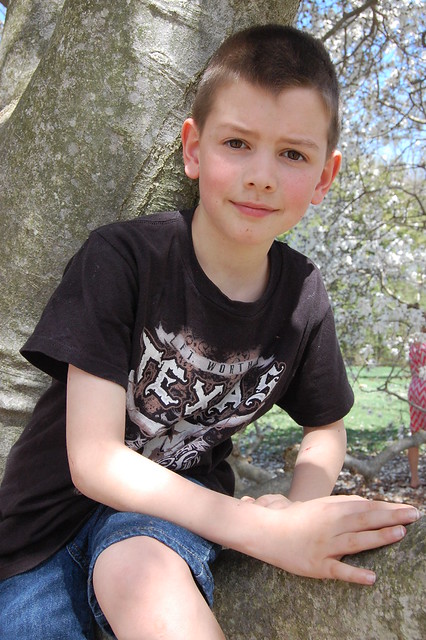 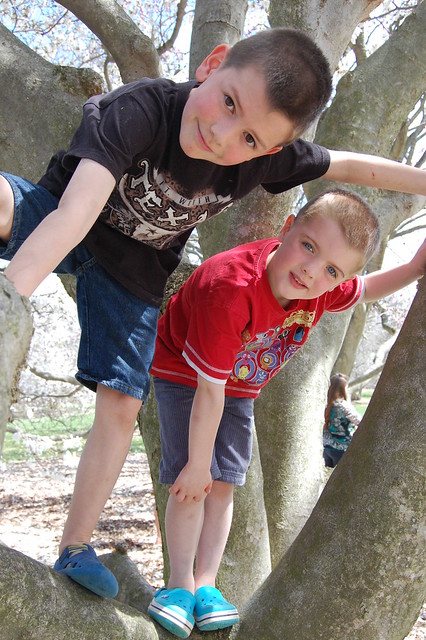 The arboretum has actually been designed with children in mind.  There are lots of fun things to happen upon throughout the trail, places to stop and play, little tree houses, and things dangling from trees.  My kids are fans of ‘Lord of the Rings’ so the hobbit hole was a big hit with those who were not beset by grumps at the time.  It was a set of intersecting tunnels fashioned from willow, the entrance being through a circular doorway just like a hobbit house.  The youngest two boys were scurrying hobbits while the 9 year old was Gandalf, complete with branch staff.  The oldest had gone all tweenagery at that juncture so I guess he was cast as an uruk hai. 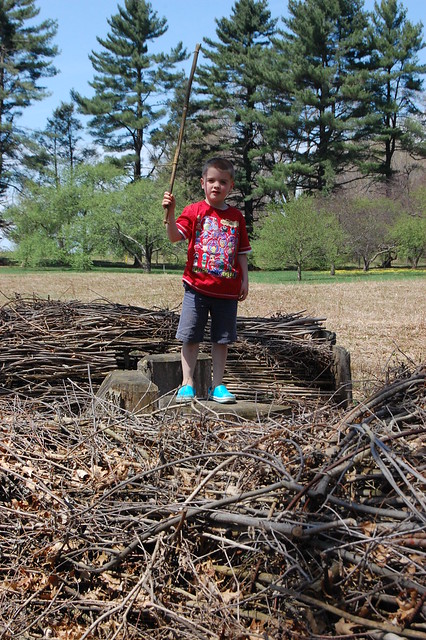 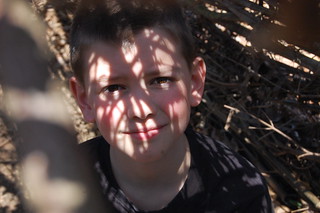 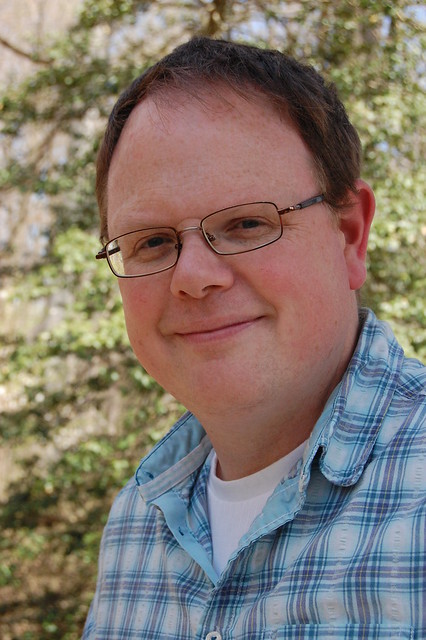 After some time spent examining the upturned roots of a large fallen tree, we took the “magic path”.  This trail was decorated with blingy mosaics and little fairies dangling from trees which my middle two sons – who must have been magpies in a past life – oohed and aahed over.  I think we might have to create some blingy mosaics for our own garden as a summer project.  While wandering the magic path, we also had a cool encounter with a snake.  The littlest Pict spotted it first and I almost picked it up in order to ensure that the older boys – who were still catching up – saw it.  But then I remembered that American snakes are not like British slow worms and I let it slither off into the grass.  I think it was a garter snake so I should have been safe to pick it up but it is probably best to leave wildlife to its own devices.  Besides, my kids were stressing me out enough.  There was no need to inflict that on the poor reptile.  They all managed to spot it in the grass in the end anyway as it decided to stare at us for a bit. 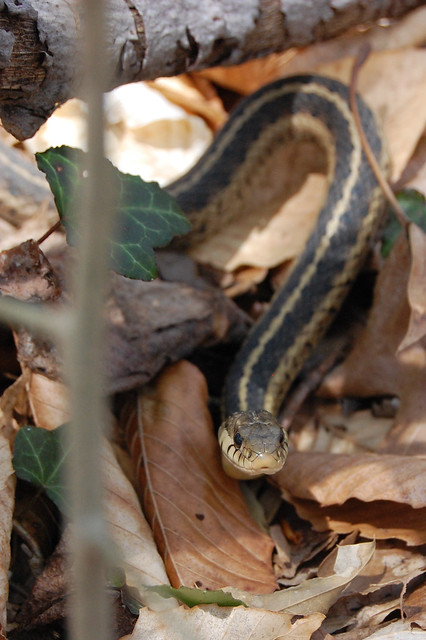 There were lots of cool little huts and buildings sprinkled throughout the arboretum.  It was like a series of play houses, each one sparking the imagination of whichever combination of kids was not behaving like a hungry grizzly bear at the time. There was a crooked goblin house (how apt!), funny little narrow houses, houses built into the hillside and even a structure in the shape of a gigantic guitar, the interior of which contained xylophones. 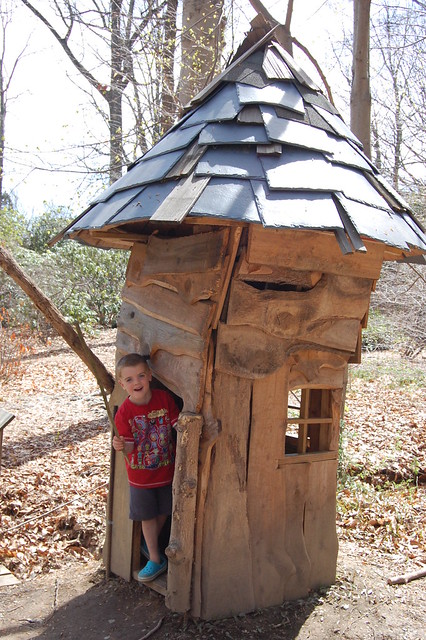 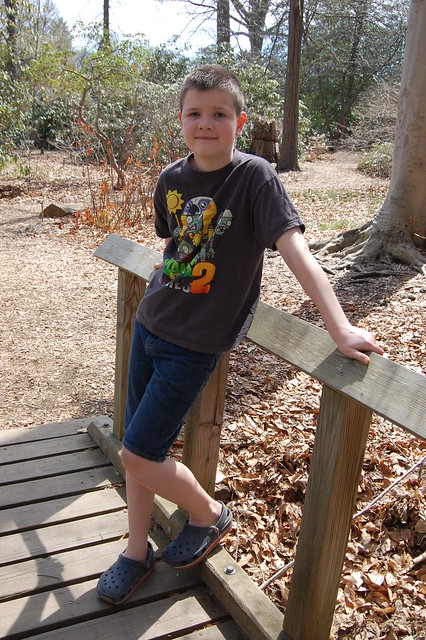 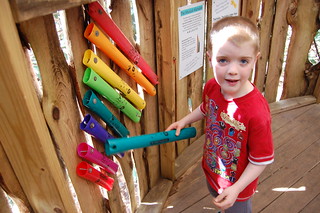 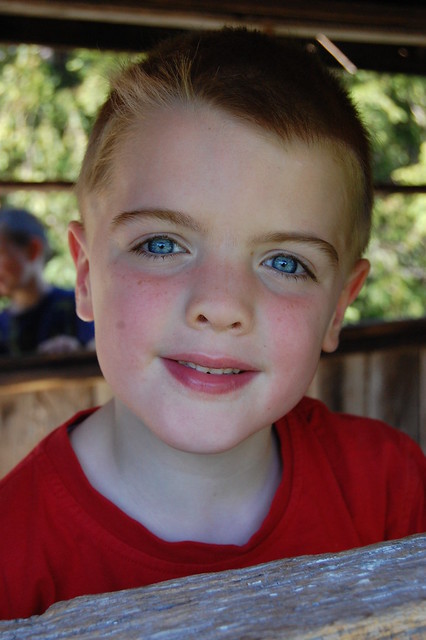 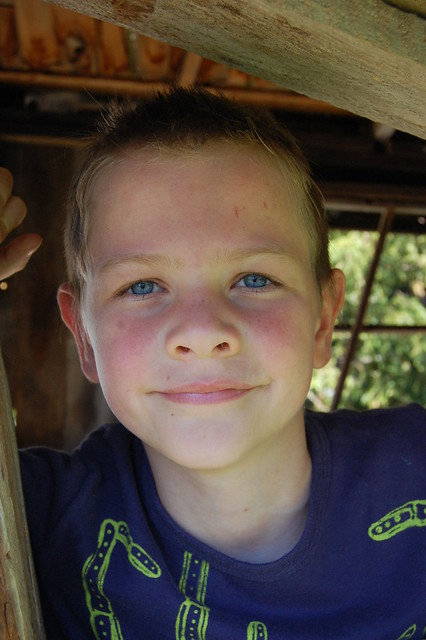 Towards the end of our wanderings, we came to a pasture where there were rope hammocks.  The kids loved the hammocks.  At first they complained about the difficulty of clambering into the hammocks and whined about falling on their bums as they spun and flopped and flipped off the other side.  Once they mastered the technique, however, they loved the hammocks and snuggled down into them.  I think they could quite easily have gone to sleep in the afternoon heat.  I should have let them.  Maybe a good snooze in the sunshine would have righted their moods. 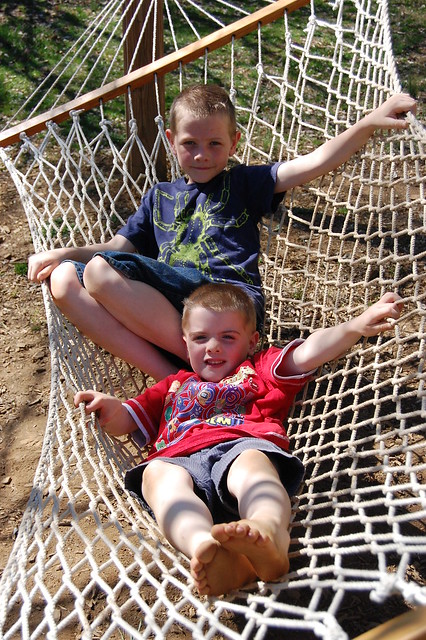 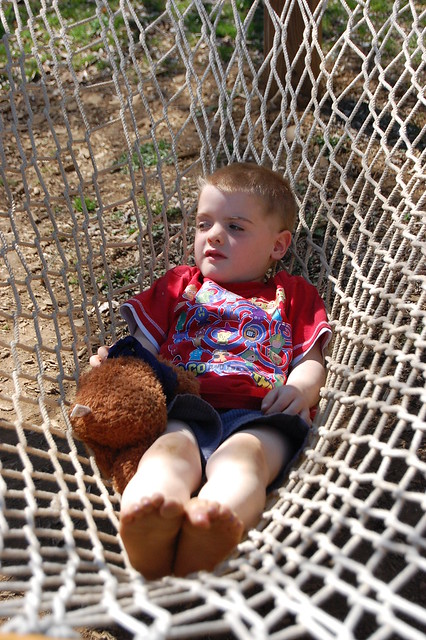 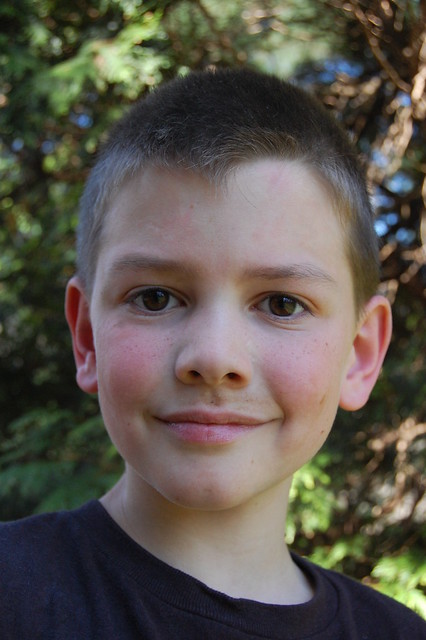 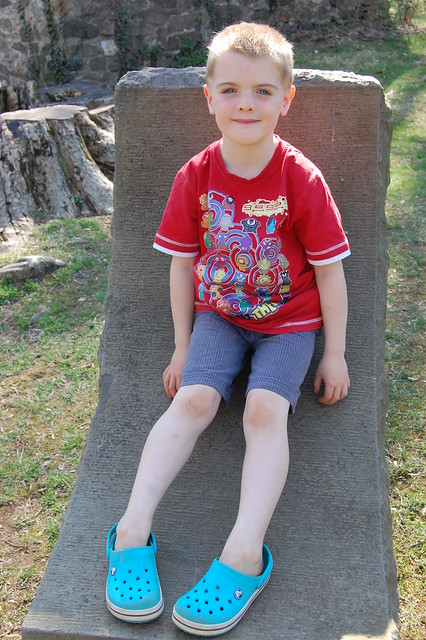 I am sure at some point we will go back to Tyler Arboretum as a family.  There were lots of areas we did not even come close to exploring.  I highly recommend it for a visit.  But go without whinging kids.