After breakfasting at the Moonstruck Diner again, we caught the downtown tour bus and hopped off at Battery Park.  Our mission for the day was to visit the Statue of Liberty.  Tickets to get inside and ascend the Statue sell out in advance but we didn’t mind as we only wanted to visit the island anyway.  I personally don’t think I will ever climb that statue as I have claustrophobia and a crippling fear of heights.  The queue for the ticket line moved quickly but the queue to get through the security checks moved like molasses.  I am not against security screening at all.  I completely understand the need for it.  However, there has to be a more efficient system for processing people.  For instance, initially we were in an orderly queue but then the fence opened up wider and we were all directed to fill every nook and cranny of the space which meant any order there had been was completely lost.  It’s the type of anti-queuing that makes we British people twitchy.  That blob of people then had to narrow down to get up a set of steps and through a door which created a bottleneck.  That bottleneck was what slowed everything up because once inside it took really no time at all to go through the security check, not least because we had all had ample time to strip off belts and organise our possessions so that we didn’t bleep. 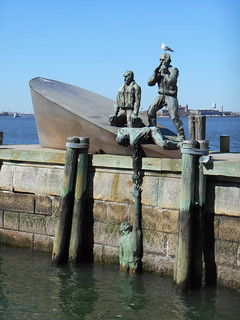 Once on board the boat – which can transport a heck of a lot of people – we scurried up to the top deck to get a good view of Governors Island, the NYC skyline, Ellis Island and, of course, the Statue of Liberty.  It was very cold indeed out on the water and I was dressed like a polar gnome for the third day in a row but the views made it worthwhile.  It took no time at all to reach the island and make land fall.  I had seen the Statue of Liberty before but en route to Ellis Island, back in August 2001, so this was actually my first time on Liberty Island too.  After the obligatory trip to the restrooms, we went for a stroll around the statue. 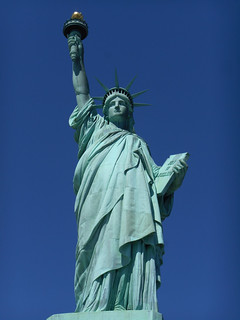 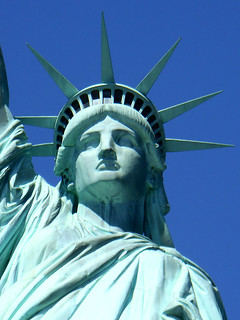 As impressive as Lady Liberty is from a distance, she is even more striking at close quarters.  I am curious as to what the statue would have looked like when the copper was new and shiny but the patination of the verdigris is effective in emphasising the contours of the figure and the folds of the cloth, the weight in the stance, the facial expression and the contrast with the brightness of the flame element.  It was interesting to see her from different angles, really appreciate the dimension of the sculpture, understand the way the pose works to support the symbolism.  I must have snapped a hundred photos of the statue as we circled around it. 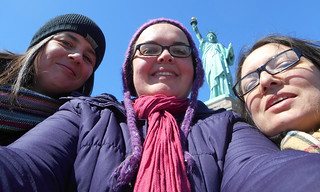 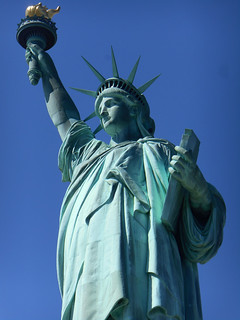 Back on the boat, it was a hop, skip and a jump to get to Ellis Island.  We were tempted to get off and explore but knew our timings were tight so decided that we would all three return to New York some time and visit both Ellis Island and the 9/11 Museum.  Although I have been to Ellis Island before, my kids have not yet been and I am eager to take them as they are the descendants of immigrants to America as well as being immigrants themselves.  As with our trip to Plimoth Plantation, I do love it when family, social and national history combine and drill some learning into my kids.  So I will be back some time with the family in tow.  The 9/11 Museum, however, will have to wait until the kids are older.  I digress.  We resisted temptation and landed back at Battery Park. 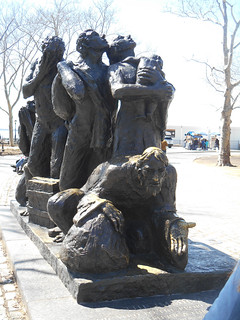 There, we caught the tour bus which unfortunately completed its downtown circuit by heading up the west shore of Manhattan.  Unfortunate because the blue skies and sunshine of the day had led to the upper deck being opened up; unfortunate because we decided to go and sit on the top deck to get the best views, shored up by our false belief that it was warmer than it was; and unfortunate because the wind sweeping across the Hudson was freezing.  We did our best to scrunch up against the cold, burrowing into our coats, hats and scarves, but our fingers went numb and our skulls felt as if they were vibrating in the chill wind.  And the traffic was slow, painfully slow, so we dragged past the meatpacking district, Chelsea, the piers, before turning inland a bit in the region of Hell’s Kitchen where we then went from a crawl to a standstill as we encountered gridlock.  The slow pace of the traffic seemed to provoke lawlessness too as cars continued to creep out against a red light simply because the vehicles who had a green light were moving so slowly that they could risk it.  It was like bandit country in the middle of the city.  Finally the bus rocked forward far enough to escape the traffic stalemate and we got back to the theatre district.  Had we been permitted to disembark, we would most certainly have been quicker walking the last leg of the journey.

We badly needed to thaw out and eat warm food.  A and M wanted to experience a New York slice so we went off in search of some street pizza.  There were hot dogs and pretzels galore but trying to find a hole in the wall selling pizza proved to be more difficult than we envisaged.  Finally we found a little place just off Broadway and better still it had a place to sit down and better still it had more than 20 tables which meant it had to have a restroom.  It is all about toilets, you see.  The pizza could have stood to be hotter – especially since we were so very cold – but it was really tasty and had a lovely crisp base.  I chose a slice of veggie pizza and a slice with fresh tomatoes and mozzarella on it, a warm version of a caprese pizza.  I devoured both.  A great last supper for our trip together. 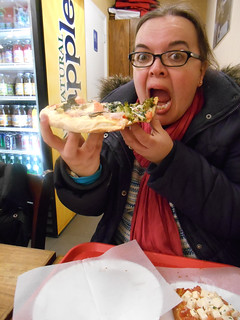 Just like that, our trip together was over.  A and M had to catch their bus back to the airport and I had to catch the train to get back home.  I actually lucked out and entered Penn Station and reached the NJ Transit area just as my train was about to head off so I had no malingering to endure.  Our three days as a trio went very quickly and we barely scratched the surface of what Manhattan has to offer.

In terms of tourism, the highlight of this trip to New York City was certainly seeing the Statue of Liberty.  However, for me the highlight was getting to spend quality time with my good friends.  Considering we used to see each other daily and meet up at least once a week, I cannot claim it was just like old times but – after 18 months apart – it was great to know we could just pick up where we left off with our friendship and have a whale of a time together.   “When shall we three meet again?”  We were already discussing where we might meet up next.  Hopefully with warmer temperatures.