There are many ways in which one can measure or assess friendships.  One measure might be friends who are willing to cross an ocean just to spend a few days with you.  Two of my closest friends from Scotland did just that.  How awesome is that?  I choose not to write about how much I miss my family and friends.  For a start, it is stating the obvious and there is not much to write about beyond that obvious statement.  It is also too vulnerable a set of emotions to share in an open forum.  Of course, the internet and social media make it far easier to keep in touch these days and that enables me to feel connected to the everyday lives of my family and friends, which certainly helps take the edge off things.  However, nothing compares to actually spending some quality time together.  Needless to say, therefore, I had been looking forward to this reunion for months.

My friends, A and M, flew in on the Thursday evening and I took the train up to New York City on Friday morning.  That leg of the trip actually represented my first ever solo travel within North America, as I have always travelled with either Mr Pict or the Pictlings before.  So that was a wee milestone.  My friends actually came to Penn Station to meet me which was a complete surprise, not least because they were right under my nose before I noticed they were there in front of me.  The three of us then walked to our hotel so that I could check in.  We were staying at the Jolly Madison Tower Hotel which is situated on 38th and Madison.  At check in, I was given an upgrade for no good reason which meant I ended up with a suite: a spacious bedroom, a large living room and a really nice bathroom.  I even got complementary personal care items and bottles of water.  A and M were outraged by the lack of parity.  Righteous indignation is one of the qualities we all share and which no doubt helps bond us.  My fourteenth floor suite had a view onto a brick wall, an aesthetically pleasing red brick wall but still not much of a view.  However, that wall did protect me from the potential racket of NYC streets.  Furthermore, my living room area proved to be a good spot for hanging out and chatting in the evenings. Having dumped my bags, we wasted no time at all in heading back out onto the streets of Manhattan.

A and M had already visited Times Square, Grand Central Terminal and the Empire State Building so we thought it might be a good idea to head out of midtown and check out downtown.  I suggested that we take the Staten Island Ferry so as to get a different perspective on the New York City skyline so that became our plan.  We were on Broadway when we conferred and decided it might be a worthwhile investment to buy ticket passes for a tour bus company to help us get around while still seeing the sites.  We went with Go New York tours.  They ran several circuits around Manhattan which offered good area coverage and each tour came with an on board tour guide.  Of the four guides we experienced, only one chap was duff.  The other three were all very good: knowledgeable, enthusiastic, full of humour and engaging.  In fact, the only down side to the whole experience was that they were not explicit – even when asked directly – about the final schedule times for some of the circuits – more of which later.

Having passed the Wall Street bull – and seen people having their photos taken beside it at both ends – we hopped off the bus at the Battery.  We were all very peckish indeed by that point so we looked around for something to eat.  Finding value for money munchies in Manhattan was to be a recurring theme of our trip.  It was a potent reminder of why I had made packed lunches for us when Mr Pict and I had visited with the kids in February.  We finally opted for a Deli opposite Bowling Green where the prices were actually not too bad considering I ate a very filling and very tasty wrap.  Replete, we headed across the street to the Whitehall Terminal to catch the Staten Island Ferry.  Designed, of course, to shuttle commuters back and forth, the ferry is also a great resource for tourists and is entirely free.  How is that for value for money?  We had wanted to get out on the open decks but they remained roped off plus it was also very cold indeed.  We, therefore, managed to get a spot by a window so that we could catch the views of Battery Park and the downtown skyline along with the Statue of Liberty.  Then we disembarked, walked through the waiting room and got straight back on the return ferry. 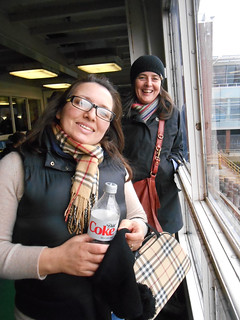 We wandered up Greenwich Street and came to the National 9/11 Memorial.  As busy as the area was, the quiet was telling.  Apart from one family who were posing for smiley-faced photos in front of the FDNY Memorial – an evocative brass wall sculpture – everyone in the area was appropriately sombre and reverential.  The photos of the 343 firefighters who perished that day had me choked.  We then moved over to look at the reflecting pools.  They are beautiful and peaceful, a tasteful and thoughtful memorial to the almost three thousand people killed that day.  We stood for some time just watching the water and thinking.  This was my first time seeing the completed One World Trade Center and I have to say that it is a very striking building.  I think it works as a symbol of America’s resilience. 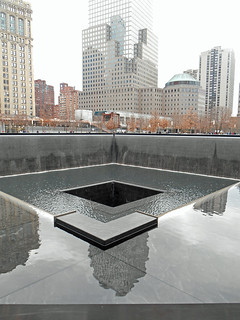 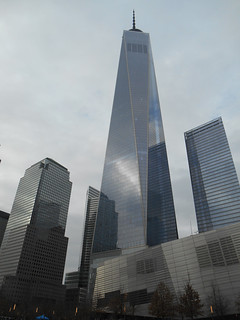 Dusk was settling at that point so we headed back over to Broadway to catch our tour bus back to midtown.  Except we couldn’t.  Because the bus had stopped running that circuit.  It took us almost half an hour to figure that out, however, so we stood there, the three of us, waiting for a bus that would never come as if we were in some absurdist play.  We were dangerously close to freezing into a tourist attraction when we figured out our problem.  Feeling stupid and disgruntled, we started hoofing it back up Broadway.  At approximately a block per minute, we were making good time but it was still a pretty long walk.   We ticked off neighbourhoods as we went to make us feel like we were accomplishing something.  Crossing Houston from SoHo into NoHo felt like an actual achievement and we were over the moon when we reached Union Square, by which time it was dark.  We were flagging and hungry by the time we were wandering along Park Avenue so we were glad to spy an empty table in an Irish pub (of which there are many in midtown).

Desperation does not make for good decisions.  The service ranged from indifferent to surly and the drinks were pricey.  My Buffalo chicken wrap with side salad was good (though I was admittedly prepared to eat a rotten rhino by that point) but M and A’s nachos were not up to scratch.  We also learned that we are too old to tolerate the skull thumping volume of music in pubs.  We were sitting at close quarters to one another but were pretty much reliant on lip reading and gesticulation in order to communicate.  We gobbled, gulped, paid the bill and departed.  We then repaired to our hotel where we flopped in the bar.  This was a lovely, cosy, comfy space.  It was also quiet.  This was a welcome contrast to the Irish bar but maybe a little too quiet.  It is a bit intense to be the only three customers for a barman who was clearly bored rigid.  The drinks were no more expensive than they had been in the pub.  We decided to have cocktails and A and I had a Manhattan each since that seemed the most appropriate drink for the location.  That was our night cap.  We shambled off to our rooms to get enough sleep to recharge for day 2.