Nothing says Valentine’s Day like actual hearts, right?  So off we went to the Franklin Institute for a family day out so that half of us could visit the special exhibition ‘Body Worlds: Animals Inside Out’.  Valentine’s Day happened to fall on an especially chilly day so using our annual membership pass for some indoor entertainment and education was perfect. 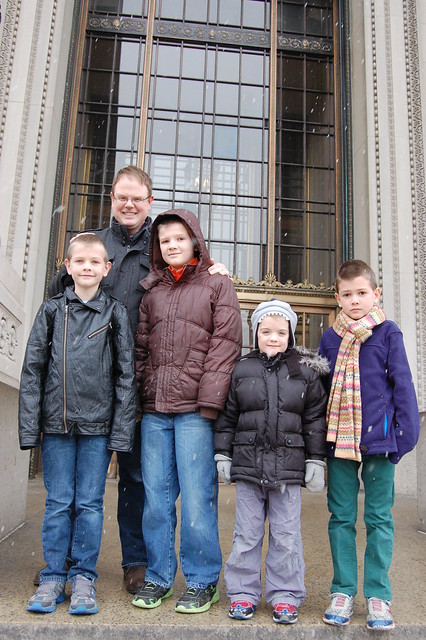 The exhibition was superb from start to finish.  The kids and I had enjoyed the animal autopsy documentary series ‘Inside Nature’s Giants’ so I knew we would find it engaging.  I went around with my 11 and 7 year olds while Mr Pict took the other two boys around other areas of the museum.  The exhibition showcases the work of the anatomist Dr Gunther von Hagens and his use of the plastination process to preserve and demonstrate the internal organs, musculature and blood systems of a variety of animals.  Being able to see all of the detail of each animal aids understanding of how evolution has worked to enable each animal to adapt to its environment and needs and – in a context that enabled and encouraged comparison and contrast – to see how similar skeletons and organs work differently in diverse species.  The boys and I pored over the detail in each specimen and read every plaque.  We also wandered back and forth to go and study something again. 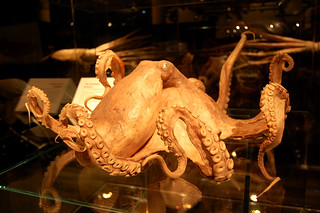 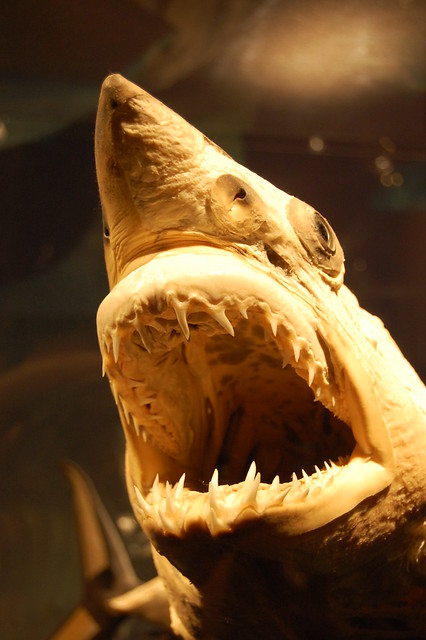 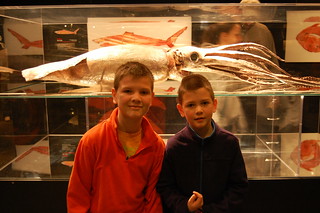 My 7 year old is obsessed with horses so he was fascinated by all the horse specimens in particular.  There was a horse skull, a wafer thin slice of a horse’s head, a horse’s head split into three sections, a horses head comprising nothing but the capillaries and a young horse rearing up.  There was always the potential for my son to be disturbed by the sight of dead horses but the little scientist in him was stronger.  He was absorbed in seeing the adaptations in the legs, the size of the brain cavity, the thickness of the nose and in learning why it is that horses cannot vomit. 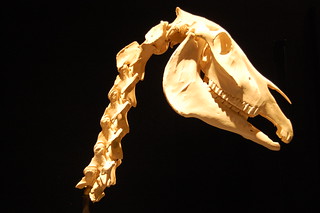 The handling of the specimens was fantastic in terms of bringing the educational lessons to life, for instance in showing how the muscles and skeleton combine to handle movement. One diorama depicted two reindeer in mid gallop.  I like to think that the dissected human we saw in the last gallery was not Santa.  There was also a bull posed as if ready for a charge which evocatively demonstrated the power in its muscles and the energy contained within them.  There were running ostriches, one showing the circulatory system and one showing the muscles. 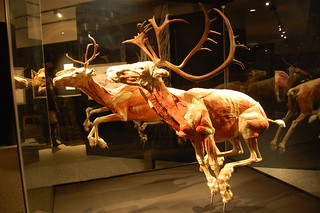 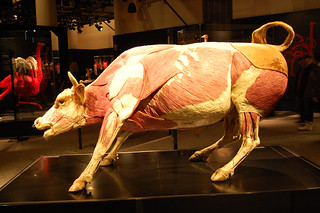 There were familiar farm animals galore, from dissected sheep and goats to ducks and piglets shaped from the mass of red wiring that was their circulatory system.  There were rabbits and peeled cats – including the nervous system of one moggy – and frogs and lizards and a dog caught in mid-bark.  There were slices of fish, there were preserved octopus and squid – the latter providing us with the opportunity to see just how large its eyes were.  The more exotic land beasts, however, provided the highlights of the exhibition.  There was a camel – or rather a conflation of three camels in order to illustrate the movement of the head – which the kids found fascinating since camels are such peculiar looking beasts even from the outside.  The specimen was used to illustrate its complex digestive system involving four stomachs.  Best of all, however, was the giraffe exhibit.  One giraffe was presented in thin slices.  We could stand between its legs and look up through its semi-transparent layers.  Completely weird and compelling.  The other giraffe was dissected, its skin peeled off to show the skeleton, muscles and organs, but the specimen was shown as if mid-run.  Next to it was a preserved heart in order to show how the blood pressure of a giraffe is made possible. 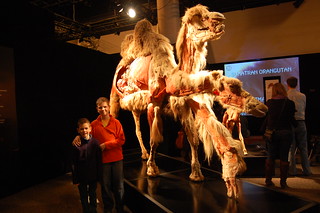 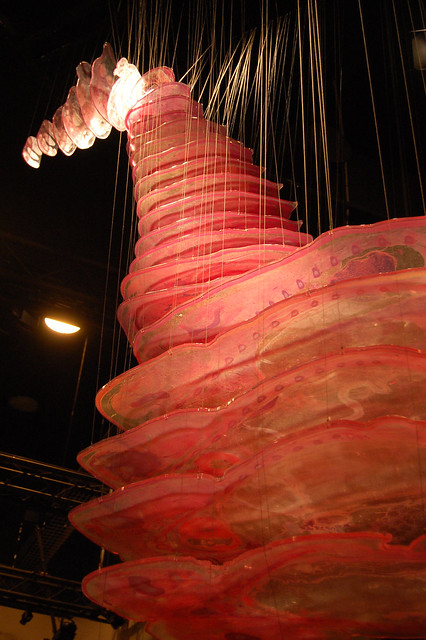 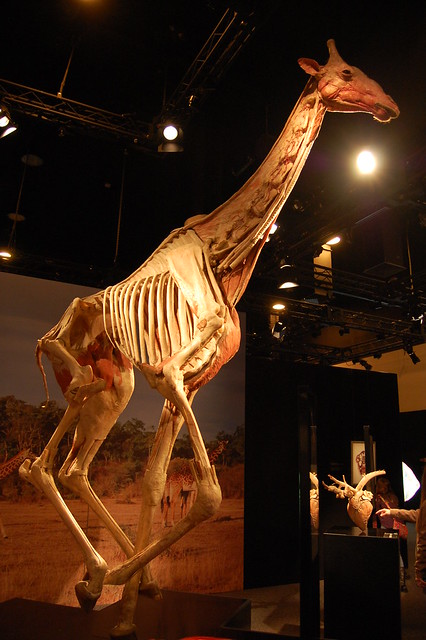 It was not just the whole animals that were fascinating, however.  I loved the sculptural quality of the tangled lines that formed the circulatory system, all the blood vessels turned into crimson plastic.  The hearts of various animals were shown side by side so that the different structures and scales could be compared.  A display my cheeky 7 year old especially enjoyed was all about the reproductive organs, the male parts of a reindeer, the testicles of a bull and a fetal reindeer.  I admit that made me feel a little sad as did the baby camel on display.  Apparently all the specimens were sourced ethically from vets and zoos and no animals were killed for the purpose of the exhibit.  My boys and I certainly emerged from the exhibition with greater understanding of the wonders of biology.

We went to rejoin the other half of the Pict family who were – oddly enough – running around in the Franklin Institute’s giant heart.  In addition to the heart area and the other favourite, the brain, we went to explore two sections of the Institute we had not visited in any of our prior visits, namely the sections dedicated to electricity and to engineering.  The boys especially enjoyed creating electrical circuits with their bodies, initially just completing the circuit with their own individual bodies but gradually linking hands and forming a circular chain in order that the electricity pass through them all and make the light come on.  My highlight of the engineering section was seeing Maillardet’s Automaton.  Constructed in the 18th Century, it is a complex contraption, a figure programmed so that it draws numerous pictures and writes poems.  You can see a short video of it in action on YouTube because certainly I am incapable of describing it adequately. 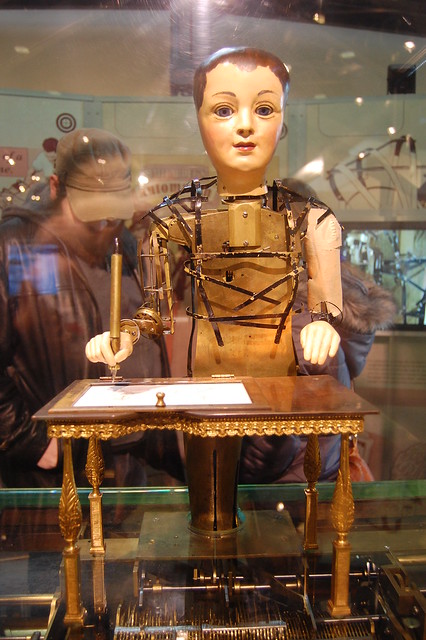 We have plans to return to the Franklin Institute again in a few weeks’ time so we are certainly getting our money’s worth out of our annual membership. 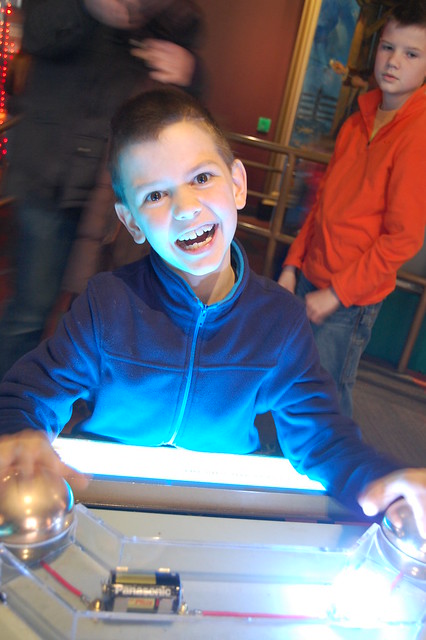 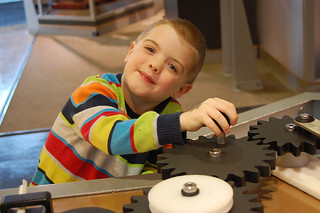 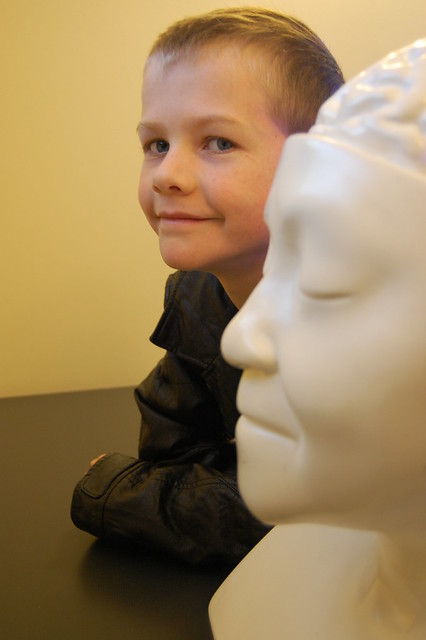 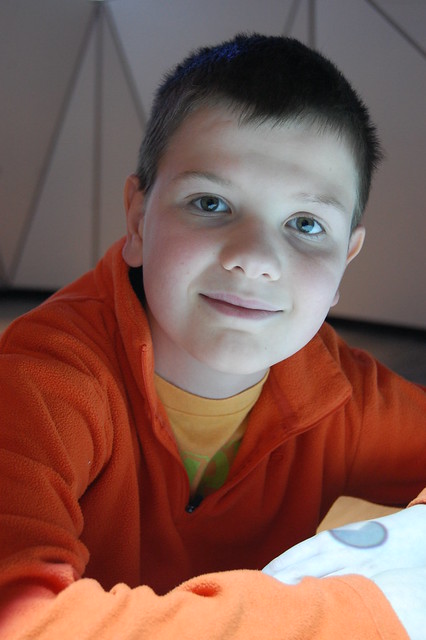 8 thoughts on “Hearts and Other Organs on Valentine’s Day”