Last week my husband arrived home bearing gifts.  While in search of a crop of pretzels to bring home, he had happened upon a store that had a shelf devoted to foods imported from Britain.  When he opened the shopping bag to reveal its contents, the children swarmed around him singing his praises, worshipping at the feet of the father who had hunted and gathered and brought home things they had not tasted in over a year. 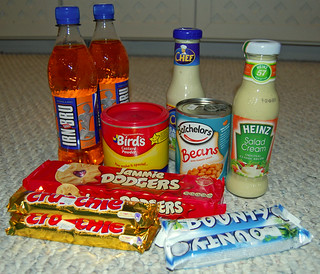 For those who are not familiar with it, Salad Cream is like a hybrid of mayonnaise and toxic waste.  As you may gather, I think it is vile.  Mr Pict and our two youngest children, however, are addicted to it.  Properly addicted.  This is unfortunate since, although it is manufactured by Heinz among others, it is not available in the US.  Luckily for them, however, guests from the UK can bring it with them.  That is the price of a visit to us.  They were relieved to discover, however, that they could now buy bottles of salad cream at this store in order to survive the gaps between salad cream bearing visitors.

The beans, it transpired, were not all that dissimilar from the vegetarian baked beans we have been eating since we emigrated.  Indeed, my children declared that they prefer the American version, probably because they contain a bit more sugar.

Custard powder is something I have been missing because, quite frankly, I suck at making custard from scratch.  Sweet scrambled eggs.  Custard powder saves me the aggravation of making it myself.  I do believe that a trifle is on the cards.

Jammy Dodgers are biscuits (as in cookies, not savoury scones) whereby a layer of super sticky jam is sandwiched between two layers of biscuit, the upper of which has a hole in it.  They are not remotely a special biscuit in Britain but it was a little taste of nostalgia.  The kids devoured them.

Probably the item we were most excited to see, however, was the Irn Bru.  Whisky is the official national drink of Scotland but Irn Bru nips at its heels.  It is a bright orange soft drink promoted as being “made in Scotland from girders”.  It is vaguely fruity but tastes like nothing natural.  It is, however, entirely delicious and very addictive.  Nobody who has tasted it has ever disliked Irn Bru  – well nobody I know at least.  Although we never consumed soft drinks on a regular basis, my kids were dismayed to learn that Irn Bru was not at available in America.  They would look for it on restaurant menus and then remember that Irn Bru would never be an option.  Of all the treats Mr Pict brought back with him from his foraging expedition, the Irn Bru was the one they had missed the most and which they were most glad to see.  It is, however, almost as expensive as liquid amber so they had to do with sharing a small bottle between two and deal with the fact it would be a very occasional treat.  Indeed, we saved the Irn Bru for Burns’ Night – we think Robbie would have approved.

Now if only we could find a source of Bradan Rost salmon on these shores.