Universal Studios had seemed busy.  It was positively a ghost town compared to our visit to Universal Islands of Adventure.  Despite arriving just prior to park opening time, the queue to even get through security checks was bulging and bad-tempered.  There were just swarms of people everywhere, like termites spilling out of a nest.

We hightailed it to the Harry Potter area which contains a replica of Hogsmeade village and Hogwarts Castle.  As we walked towards the line, the sign proclaiming a 45 minute wait morphed into 90 minutes and as we turned the corner it ticked over to 120 minutes.  We contemplated not doing the ride at all, given the extraordinary length of the queues, but as Potterphiles it seemed ridiculous to come to Universal Islands of Adventure and not visit Hogwarts.  The nature of the ride itself, however, put off several members of the group so while the grandparents headed to Dr Seuss land with the other boys, Mr Pict, our oldest son and I resigned ourselves to a lot of queueing.  The high quality of the Gringott’s Bank ride led us to expect that the queue would at least be worth waiting in.  It was, without a doubt, the longest line I have ever seen.  It contained lots of switchbacks and detours out of the Wizarding World and into adjacent areas of the park yet still we had to be snaked around the back of Hogwarts, which turned out to be a blank façade, somewhat ruining the magic.  A lot of staff were being deployed just to manage and control the lines and they had all been to the same boot camp where they were taught to bark passive-aggressive orders in cheerful, musical tones.  For the most part, however, at least the queue was interesting.  We listened to music from the movies, shuffled through the herbology greenhouse and moved through the castle – past statues of wizards, past corridors of moving paintings, through Dumbeldore’s office.  Finally we were at the front of the line.  We were loaded into seats that were suspended from the ceiling so that we could feel as if we were flying.  We were flung around and jolted here and there.  My legs were flapping around like a rag doll.  A mixture of technical effects were used but they created attacking dragons and dementors to escape.  The challenging part for me was the quidditch match.  The movement of the chairs combined with the fast pace of the visual imagery and the fact it was a simulator made me feel really very nauseous.  I had to squint my eyes to be out of focus just to be able to cope.  It was an absolutely brilliant ride (though not as good as Gringott’s Bank) but it was definitely at the boundaries of what I could cope with and tolerate. 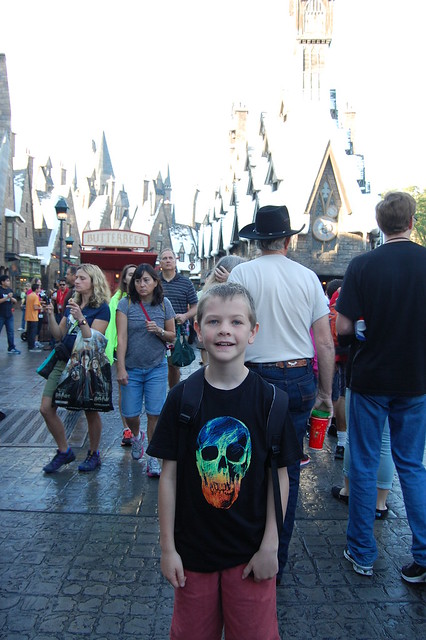 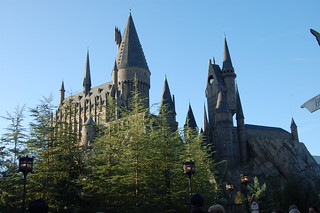 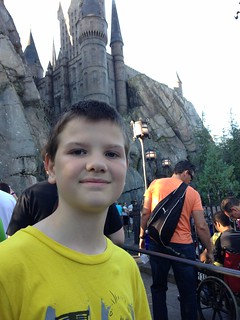 We promised ourselves that we would return to the Hogsmeade area at some point as a group of eight.  Some of the boys wanted to do the Hippogriff rollercoaster and we all wanted to see the detail of the buildings.  It was not to be, however.  After we left the area, the visitor numbers were such that they had to create a queue (which was an hour long when I asked) just to obtain a ticket containing an entry time for getting into Hogsmeade.  Once inside, the ticketed visitor still had to queue up for any of the rides. 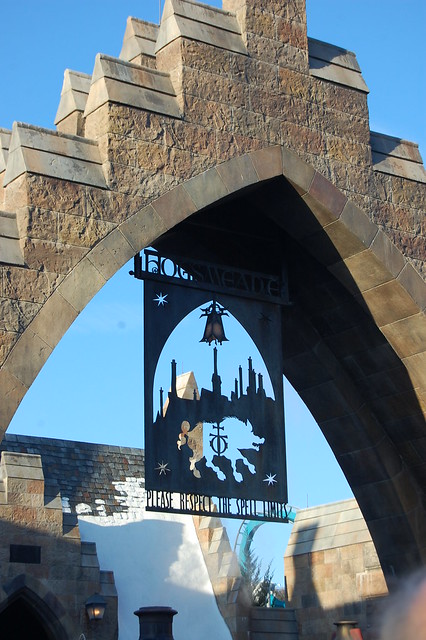 We chose not to fritter away such extraordinary lengths of time on one area of the theme park though we were disappointed at having to make that choice.The whole park was actually just far too busy.  We learned that it was at 90% capacity and we felt the pressure of every one of those 45,000 people every time we tried to move.  The pathways through the park were badly designed as we encountered several bottlenecks.  There were also points where we got caught up in a current of moving people and it was difficult to find a way out of that surge and towards where we wanted to be.  It was 82* Fahrenheit too which added to the sense of harassment.  I dislike physical contact; I loathe physical contact with complete strangers; physical contact with a heaving mass of sweaty strangers made me wig out.  It was all just too much, far too much.  I would have come away from Universal Islands of Adventure with a far more positive feeling had there been fewer people.  As it was, my experience of the place was tainted by the feeling of just being constantly harassed. 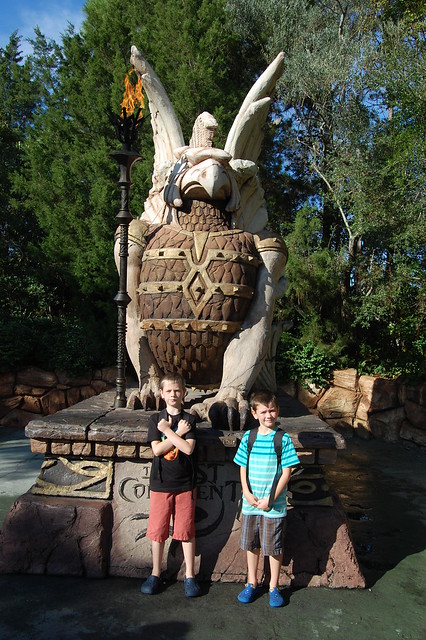 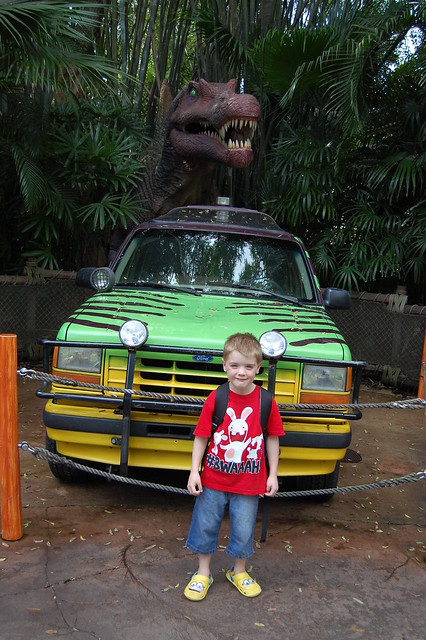 For the 90 minutes that we were trapped in a Hogwarts queue, the other kids and their grandparents had been exploring Dr Seuss Landing with them, they were eager to show us the sights.  Arlo’s favourite ride had been the Sneetches sky train so we did that first.  It was cute.  We travelled on an overhead monorail past characters from various familiar Dr Seuss stories while a voice in our mini train carriages narrated a rhyming story that was an amalgamation of various stories.  Then Mr Pict and the kids went on the One Fish Two Fish air carousel, another one of those rides whereby the pods – this time shaped like fish – rotate while also being able to move up and down.  Every so often, they would be squirted by water as they moved past some fish. 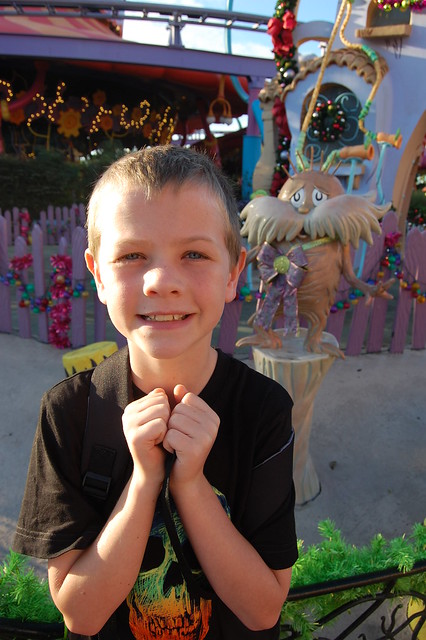 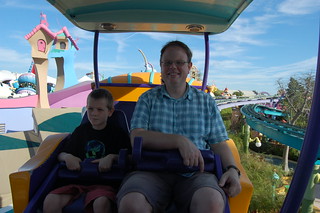 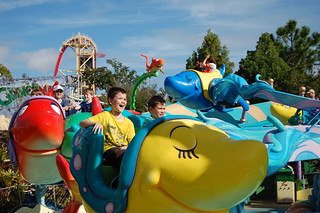 Since they were already wet, Mr Pict and the boys decided to go on a water ride.  We, therefore, headed over to the comic book area (which did not seem to fit into the rest of the park) to the Popeye barrel ride.  Popeye is one of those characters who seems to have disappeared since my own childhood, when he was already a vintage has-been, so the fact his heavy jawed mug and bulging biceps were using to sell a ride in a state-of-the-art theme park struck me as odd.  At the last moment, our 9 year old decided not to go on the ride.  Wise decision.  We watched as Mr Pict and the boys were loaded into a barrel boat – a process that took ages because the staff were letting boats set off mostly empty, lengthening an already long queue.  From our vantage point on a bridge path, we could also see their boat being released and tipping over the edge of a weir.  That, however, was as much as we could see of their aquatic journey because unfortunately there was no more pedestrian access to the route they took.  We sat at the ride’s exit, waiting for them to emerge.  When they did appear, they looked like a group of swamp creatures.  All four of them were entirely sodden, their hair dripping, their clothes sticking to their bodies, their shoes creating puddles with every step taken.  Luckily for them, the same dry heat that was making the crowds even more unbearable also dried them out quickly. 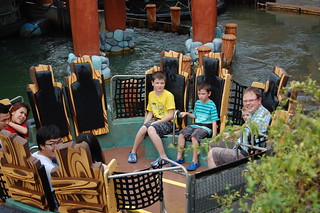 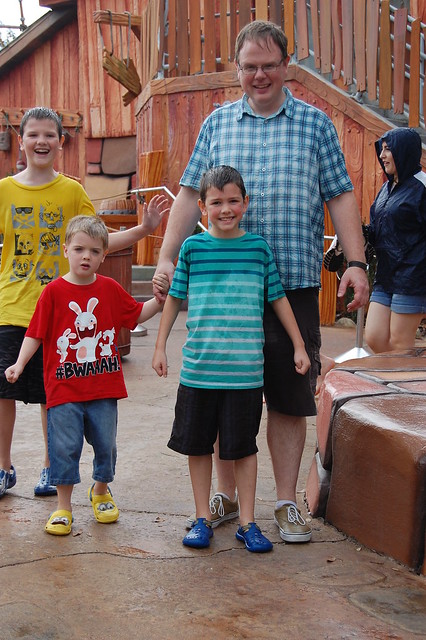 Next up was a live action show based on the stories of Sinbad.  The shade of the auditorium provided welcome respite from the sun and some order and calm away from the chaos of the theme park’s walk ways.  There was a large and elaborate set which operated at different heights and levels, there was fire and fireworks, an evil sorceress and her monstrous cronies, a princess who needed rescued only so she could then kick butt on her own behalf, well-practiced choreography, swinging on ropes, jumping and a comical sidekick.  The sound mix was a bit ropey at points, making it very hard to follow the dialogue, but it was all about the action so that did not matter so much.  It was slick and fun.  The kids absolutely loved it. 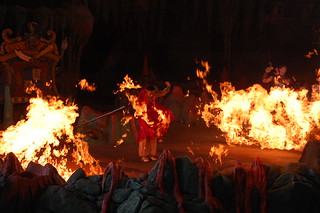 During our long stint at Hogwarts, the others had gone on the Poseidon’s Fury ride.  Our 9 year old was desperate to return to the ride and show it to Mr Pict, his oldest brother and me.  Of course, the park had been much emptier first thing in the morning (and all of the crowds were, of course, packed into Hogsmeade with us) so they had had no queues, had been able to walk straight into the attraction without any waiting, hassle or faffing.  This time the queue was 50 minutes long.  Incredibly that was one of the shortest line times in the park at that juncture.  My in-laws went off to find a shady spot to rest in and the rest of us decided to suck up the wait, joined the end of the line and proceeded to get baked in the blazing heat of the afternoon sun.  It was a long and not very entertaining 50 minutes.  The first thrill of the ride was just the elation of entering the cool, dark interior of the building. 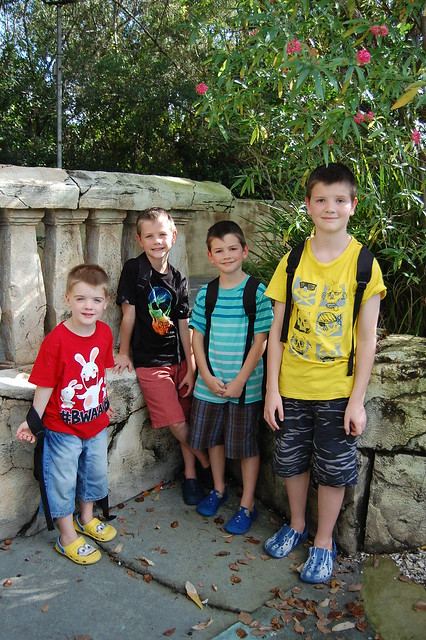 The premise of the ride was that we were in Poseidon’s Temple, being given a tour by the assistant of a famed archaeologist.  However, the excavation had awakened some sort of demon who could only be defeated by Poseidon’s trident which we, therefore, had to locate.  We moved from room to room in order to be dazzled by different special effects.  Images of Poseidon and the demon were projected onto falling water, there were quality pyrotechnics, explosions and fire, but best of all was when we had to walk through a tunnel that was a vortex of water.  Water swirling around us so quickly that it formed a tunnel we could pass through without getting anything more than the occasional bit of light spray.  What did not work so well was the viewing.  The stands were not raked enough so that those of us standing towards the back of the room could not see past the people in front of us well enough and were missing out on some of the show.  Even lifting the smaller of our kids, it was very difficult for them to see what was going on.  That was frustrating.  However, that water tunnel was incredible and really made the ride, made it all worthwhile. 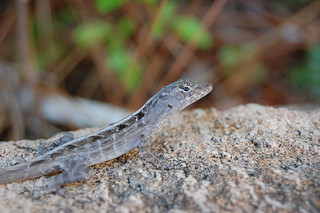 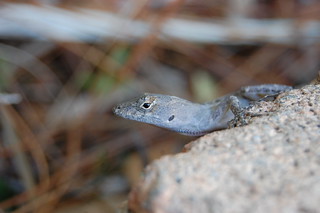 In keeping with the season, there was a live performance of The Grinch running a few times each day.  Intent on some festive fun, we got in line for Merry Grinchmas.  Thankfully the line was not too long and we were all shuffled into and seated down in the theatre.  The show was based on the movie version of Dr Seuss’ classic tale rather than the original text.  Some of the singing voices were better than others but the performance was engaging and enjoyable, the prosthetics and costumes were spot on and the whole thing possessed festive charm, including fake snow that fell on the audience at the end of the show. 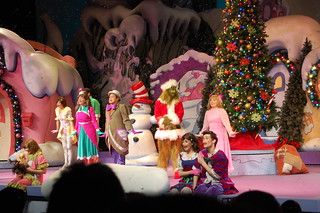 At that point there was not a single ride in the park that had a wait time lower than an hour and the most popular were over two hours long.  Even in Seuss Landing, where surely the only interested people were small kids, the queues were extensive.  My kids were smart enough to decide not to queue for an hour for a ride that only lasted a couple of minutes.  Good choice.  We decided, therefore, to cut our losses with Universal Islands of Adventure, escape the maddening crowds and head back to the villa.

3 thoughts on “Universal Islands of Adventure”